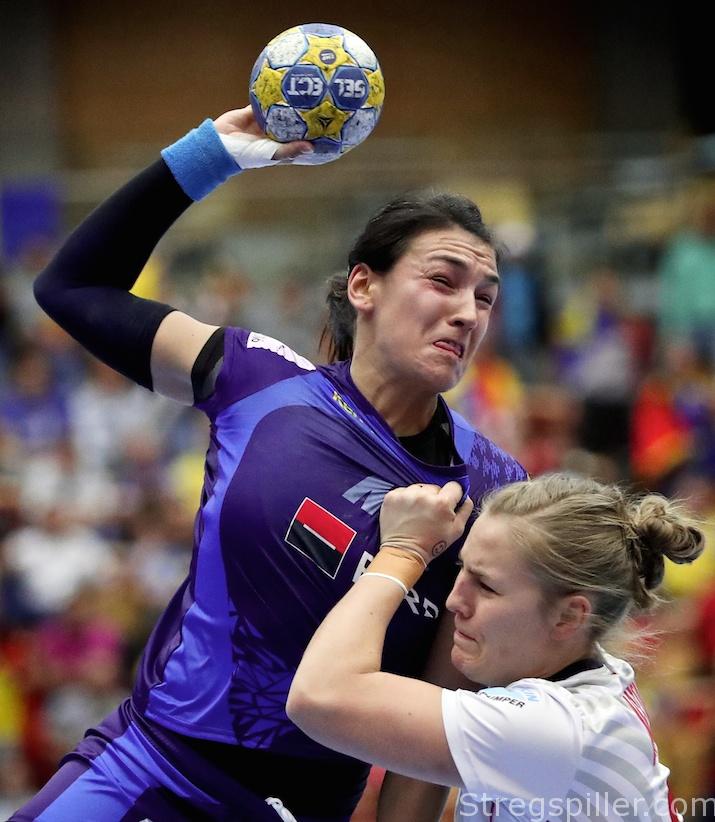 10 goals from Neagu not enough, as Vardar take all points

Andrea Penezic and Andrea Lekic combined for 15 goals, when Vardar won the top game in Group 1 of the Women´Champions League main round at Buducnost.

In the other match in Group 1, on Sunday, Thuringer HC smashed Astrakhanochka, while FC Midtjylland trounced Team Esbjerg in the Danish derby.

Vardar started the main round on top of the group with seven points, while Buducnost had dropped from second to third position on Saturday, due to FTC´s victory against Metz. Buducnost were on six points.

There was every reason to expect a showdown between stars such as Andrea Lekic, Alexandra Lacrabere and Andrea Penezic (Vardar), and Katarina Bulatovic, Cristina Neagu and Djurdjina Jaukovic( Buducnost).

Buducnost had won a recent “dress rehearsal” in the regional league – 30:29 at “Moraca” hall.

Winning in “Moraca” is an achievement, that not many teams accomplish, but around half time, Vardar were in trouble.

A great performance in attack courtesy of Andrea Penezic, Andrea Lekic and Alexandra Lacrabere in addition to a fine showing of Amandine Leynaud in goal was the basis for the win. Now, Vardar enjoys a two-point advantage over FTC in second position. Buducnost follows behind.

With only a few of exceptions, Vardar were leading all the way.

Vardar’s two Andreas – Lekic and Penezic – were on fire from the start, scoring four goals each in the early stages of the natch, and combining for eight of Vardar´s first nine goals.

A focused effort in defense further helped the visitors dominating the first half. Cristina Neagu was the only real threat to Vardar.

A fine finish from the home team changed the half time score into a stand-off, when Katarina Bulatovic beat the buzzer with a penalty shot – her only goal in the entire game!

Buducnost started the last half hour having the momentum just as they had in the last minutes of the first half.
They went up 20:17 but were unable to hold on to the lead.

Vardar scored the equalizer at 20:20, and the pattern repeated itself a couple of times in the following minutes.
Buducnost got up by two or three goals , but Vardar always came back.

When Penezic provided for Vardar’s first lead in the second half (27:26) with barely six minutes left to play, it began to look like a road win. And when Lekic extended the visitors’ advantage at 29:27 with less than three minutes to go, momentum had shifted to the Macedonian side.

20 seconds later, Cristina Neagu who was the highest scoring player for Buducnost (10 goals), missed against Leynaud, and in the following Vardar attack, Jovanka Radicevic made it 30:27 – game over.

This award goes to Andrea Lekic.

Vardar´s Serbian playmaker is back at full strength after her long injury break in 2016.

She crowned a stellar performance as playmaker with seven goals on nine attempts.

Vardar have firmly set course for the quarter-finals and can look forward to an interesting home game against Metz on Saturday.

Buducnost will have to get back on track against pointless Astrakhanochka, when they travel to Russia next weekend.

THC had no problems taking over fourth place in the group, for now.

Astrakhanochka did not have much to challenge the German champion on Sunday afternoon at Wiedigsburghalle, in Nordhausen.

The THC quickly went up 3:0, and from that point onward, they never looked back, increasing their lead continuously.

While the German club boosted its quarter-final hopes, Astrakhanochka remains as the only team in the main round without a single point.

The quarter-finals seem to be very far away for the Russian champions.

Derby of the Day

The match was the first clash between two Danish teams in the Champions League main round since Ikast Brande and Viborg met in the 2009-10 season.

Midtjylland were entering the main round with four points, twice as many as Danish champions Esbjerg.

Among other things, the game was a remake of the Danish championship final of last season, when both legs ended 16:15 for the home team, before Esbjerg became Danish champions via penalty shoot-out.

Esbjerg were severely handicapped missing pregnant Dutch star Estavana Polman, and adding to their troubles, line player and defender Rikke Zachariassen had sustained an injury during training on Saturday.

Aside of a shaky period in the first half and a two goal deficit by half time, FC Midtjylland were in complete control of the Danish derby.

Once Midtjylland got their defense working, and Sabine Englert improving her performance in goal, Esbjerg did not stand a chance in Ikast this Sunday afternoon.

FC Midtjylland got off to an easy start in a high-scoring first half, where it did not take the hosts long to get ahead 10:5.

In the beginning, Esbjerg´s backward movement after missed shots was virtually non-existing, and their established defense did not work either. In attack the Danish champion was operating without self-confidence.

Eventually, the visitors managed to correct such deficits and it was enough to turn the game around before the first half ended.

Midtjylland entered the court with a much better attitude and a significantly tighter defense.

Sabine Englert improved her own performance as well, and when Esbjerg slowed down once again, lacking the physical resources, the second half belonged completely to the home team.

Soon the half time score, changed to 23:20 in favor of the host, who were in total control for the rest of the match.

Neither seven-against-six nor “one-on-one” defense on Stine Jørgensen helped the visitors who were run over as the match progressed.

With 12 goals, the honors go to Stine Jørgensen, although in close contest with right-wing Trine Østergaard who scored nine times in 10 attempts.

In Midtjylland´s established attack, Stine Jørgensen´s shots were a constant threat to Esbjerg’s wobbly defense.
Former national coach, Jan Pytlick, can look forward to having both players in his team next season, while they will be severely missed in Midtjylland.

Midtjylland remain undefeated at home in this Champions League season and are now second in their group with six points.

They will probably get a better idea as to where they stand, when they visit Larvik on Saturday.

With only two points, Esbjerg are in last position, and on Sunday, the Danish champions will face an even tougher test, when the top team of the group, Gyor will be visiting Blue Water Dokken arena.