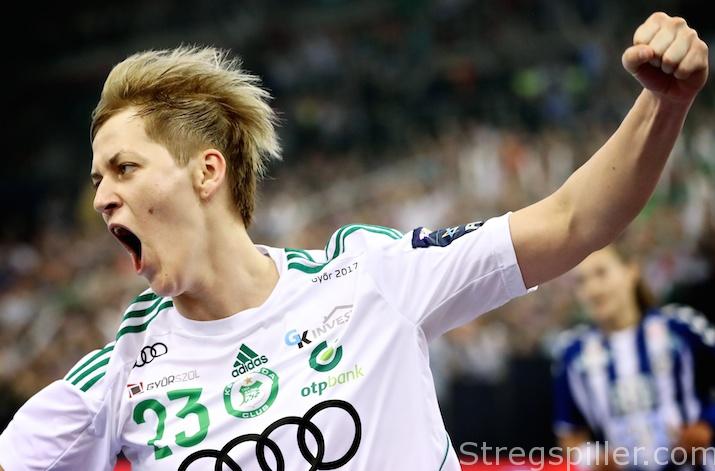 stregspiler.com MATCH OF THE WEEK REVIEW – As the first thirty minutes ended in a draw, Györ only needed 10 minutes early in the second half to decide the match against Vipers.

Vipers Kristiansand followed the favorites only during a very fast-paced and high-scoring opening half.

As soon as Györ tightened the grip at the start of the second half, the home team did not stand a chance, and the Hungarian handball powerhouse was quick to decide the matter, as they went from 17:17 to 25:19 within a matter of minutes.

Both squads began the game at a high pace and no more than two goals separated them during the first 30 minutes.

Stine Bredal Oftedal handed Györ their first two-goal advantage, when she made it 7:5  (12th minute), but less than three minutes later, Vipers was able to turn the tables, taking their first lead, courtesy of Silje Waade (9:8).

However, it was not in the attack where Vipers encountered problems.

It was at the other end of the court, where they had particular problems containing Stine Oftedal who played a brilliant game.  Yet, neither her performance nor the six goals she scored before the break were enough to earn Györ a lead at the half.

Györ’s coach, Gabor Danyi, rotated his versatile squad quite diligently throughout the match with some success.

Case in point – six minutes into the half, Eduarda Amorim, who usually spends most of her time in defense, provided her team with their first three-goal lead (21:18).

Soon thereafter Györ benefited from a suspension and increased the score to four goals (23:19).

As the match progressed it became apparent that Györ was just too strong of a team.  Their aggressive defense caused Vipers more and more problems and Amandine Leynaud, who had replaced Kari Aalvik Grimsbø in goal already before the break, made a significant contribution to Györ’s victory.

The Champions League quarter-finals will be up next for both clubs and they have four weeks to prepare for it.

Vipers will face Buducnost, enjoying home court advantage in the second leg, while Györ will play against an injury struck  Odense HC.

But first, Györ will compete in the Final4 of the “Magyar Kupa” – the Hungarian Cup – next weekend. The event, will take place in Hungary´s second largest city, Debrecen, and the tournament will be covered in depth by stregspiller.com.