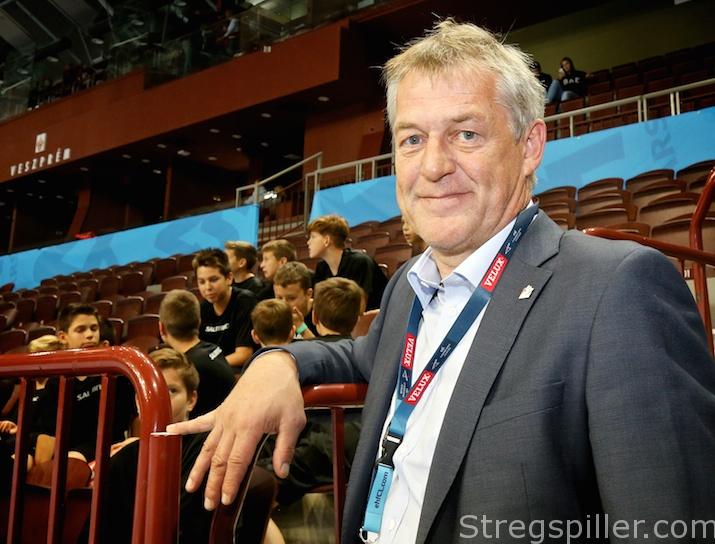 “I am 100% sure that Flensburg will remain a top club”

INTERVIEW – Despite stiff competition from wealthier clubs elsewhere in Europe, Flensburg’s managing director, Dierk Schmäschke, is convinced that his organization will defend its position as a top club in Germany as well as in Europe in the years to come.

In this exclusive interview with stregspiller.com, he expresses his firm believe that SG Flensburg-Handewitt´s brand as a German/Scandinavian club will serve as a strong basis for ongoing success.

“When sharks fight, shrimps get eaten” an old saying goes.

“Sharks” like Paris and Veszprém are fighting neck and neck to rule European handball, and with Barcelona, Vardar, Kielce, Kiel and Rhein-Neckar Löwen doing their best to hang in, one might fear that SG Flensburg-Handewitt – located in a remote corner in the north of Germany – will become one of those shrimps that others will have for lunch.

However, the 2014 Champions League winners – the club has been competing on Europe’s handball stage every year for the last 23 years – refuse to give in.

“I am one hundred per cent sure that we will be able to maintain our position as a top club in Germany as well as in Europe in the years to come,” Dierk Schmäschke (SG Flensburg-Handewitt) tells stregspiller.com.

He has been serving – with some interruptions – as the club’s managing director for a total of 14 years, now.  Schmäschke epitomizes Flensburg’s DNA like no other after having played for SG Weiche-Handewitt, before the merger that formed SG Flensburg-Handewitt – he knows the organization inside out.

The fact that several key players will leave the team after this season, and a recent announcement of Rasmus Lauge heading to Veszprém next summer might give cause for concern?   Not so, when asking Dierk Schmäscke.

“We already found qualified replacements for the players who will be leaving us after this season.  And we are going to have a very strong team next year as well, even though we are very sad to see Rasmus Lauge go – we will find a qualified substitute for him.  Our team will be competitive in the future.

“For many years, we have been successful in attracting Scandinavian players, in particular.  They have always fit in very well, and this is a strategy we are going to pursue.

“Building our brand as a German/Scandinavian club is what will keep us competitive,” expects Dierk Schmäschke.

“Some of the current top clubs – particularly in Eastern Europe – are depending on one man, one investor.  We have the advantage of multiple sources of income and this circumstance makes us less vulnerable than others,” he adds.

“Of course, capital plays a role in building a robust team, but I strongly believe that we possess other qualities that make us attractive as well.

“The intimate atmosphere and unity that players experience in our club are also important factors for those who choose to play for us – we have several examples of players who have remained loyal for many years.

“A player such as Thomas Mogensen was 24 years old when he joined Flensburg.

“He has stayed with us for 10 years now, even though he probably could have made more money elsewhere.

“After this season, he will be taking his 10 year experience with him, home to Denmark and to Skjern, just like Anders Eggert did this past summer.

“It’s great that Danish clubs can benefit from the experience Danish players have gained here in Flensburg.

“And I am sure we will be just as satisfied with the next generation of Scandinavian players we have signed from the Danish league – such as Gøran Johannesen, Magnus Jøndal and Torbjørn Bergerud.

“We have to realize that players last for a shorter time period in the Bundesliga than in some other leagues because of the physical strain.

“Danish teams who play in Europe have the same “problem”, while clubs from Spain, Hungary, Macedonia and Poland don’t have strong and competitive leagues to worry about.

“You must also keep in mind, that the German Bundesliga is the best handball school and the best place in the world to develop as a player.

“That’s just another reason why we can keep attracting talented players.

“Every time we had to say “goodbye” to some of them, we managed to find excellent replacements, and the same is true for the coaching position.

“Before this season, we lost Ljubomir Vranjes to Veszprém – still, we play just as good as we did last year,” says Dierk Schmäschke who refuses calling it a disaster, if Flensburg would not qualify for the 2018/19 Champions League.

The risk is always there, as only two German teams will be admitted to the prestigious club tournament next season.  Right now, Flensburg share second place in the Bundesliga, but competition at the top is severe, to say the least.

“A club like Veszprém, for instance, undoubtedly depends on competing in the Champions League every year.

“For us it’s not a must. Of course, we strive for the very best every season, and this includes playing in the Champions League, but if we have to play for the EHF Cup for a year, that’s what we will do.

“We have done it before and succeeded – in fact, we have won all the European competitions we could possibly win over the past 20 plus years.

“Anyway, we will have to get used to the fact that qualifying for the Champions League will be tougher going forward.

“As of 2020, there will be considerably fewer teams in the Champions League compared to today,” he says, referring to the new format, which will apply from the 2020/21 season, with only 12 (possibly 16 at a later point) teams in Europe’s premier handball league.

Not afraid of football

New competition for sponsorship money may be on the horizon in the north of Germany soon.  Holstein Kiel is well on the way for a historic promotion into the 1st division of Germany’s football Bundesliga.

At first sight, it looks like a problem for THW Kiel only – Flensburg’s arch rival – but as Bundesliga football would be historic to the entire Schleswig Holstein region, and with HSV Hamburg fighting relegation, Flensburg might feel the impact as well.  Still, Dierk Schmäschke is not afraid.

“Of course, football is something special, but I do not think a possible promotion of Holstein Kiel will affect our budget much – partly because we are a German/Scandinavian club, as I said earlier.

“For one, we have many, very fine Danish sponsors and secondly, we are a handball brand known all over Europe.

These two factors make us less dependent on regional sponsors,” as he points out.

“With regards to boosting our income, a scheduled extension and modernization of “Flens Arena” will come in handy as well.

“Overall, we will continue following our well-known and proven strategy that has worked successfully for so long.

“In combination with hard work, we are confident that SG Flensburg-Handewitt will play a role at the very top of German- and European handball – also in the future,” concludes Dierk Schmäscke.