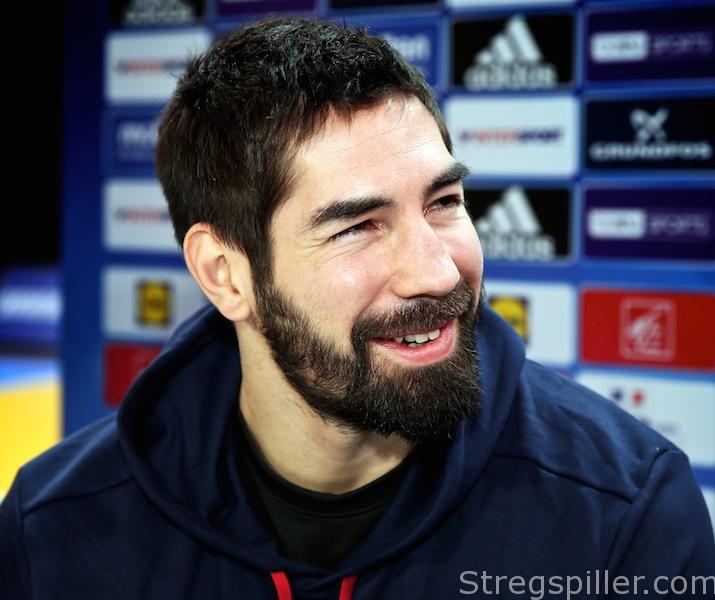 INTERVIEW – You bet that the press officer of the French team didn’t expect as many journalists turning up. But, on Sunday morning, almost 40 of them squeezed in a tight room to witness first hand what Nikola Karabatic, the superstar from Paris Saint-Germain, had to say in his first public press conference after the joining Team France, in Berlin at the ongoing World Cup.

For now, he will only train with the team and even though he didn’t say it in French, he later mentioned to German media representatives that he’s under the impression that he won’t be playing in Tuesday’s high-profile clash between France and Germany. Nonetheless, Nikola Karabatic remains at the disposal of the team and can be brought forward at any time.

Nikola, how does it feel to be back in the team?

NK:  I’m very very happy to be here as it wasn’t a sure thing.  In the beginning, I had erased the World Cup from my mind, as I didn’t know how long of a recovery time I would need. We all thought it would be more around four to six months. For me to be here, even as the 18th man, is a real pleasure. I can also see that everybody, including players and staff, is happy to see me back. For me it’s better to be here instead of sitting in front of  my TV.  I want to be part of the journey together with the team – even as a substitute. In case I can join, I want to help them the best I can. I’ve done everything to be here today and I worked very hard -three to four hours per day.

Was there a need to persuade Paris Saint-Germain?

NK:  Some talks were necessary. But, the most important decision was to get the green light from the medical staff. That was the most critical call, making sure that there would be no risk for me that would make the injury worse. As soon as I had the OK, I began to practice with the B-team in Paris. That was the second step. These were the criteria that had to be checked-off before I could think about joining the (national ed.) team. Now, I have to see how my foot behaves at the international level of handball, but we’ll see during practice sessions.

What do you think you can bring to the team even without playing?

NK:  Right now, I’m only there to support the team. I can only help and give my teammates some advice, if they ask.  My role is to back them and help them perform. If I were to join, then we’ll see, but now I’m only offering my support.

If you were to play what kind of help do you think you’d be able to offer?

NK:  I definitely won’t be playing 60 minutes! The reason Paris gained trust in the decision is because I first come here as the 18th man to start training. If the team needs me, I won’t be playing 60 minutes on both sides of the court as I used to do. That’s not the objective. I want to bring what I can, whether it’s 1, 2 or 10%. I don’t expect to play and that’s what I told my teammates. If everything runs perfectly well, I’ll stay as the 18th man and ‘ll be the happiest person in the world.

Do you think your presence will add some pressure on some of the players who are in the team at the moment?

NK:  I think they’ve enough pressure already!  We could see it in the first two games; they don’t need me to feel it…I don’t know, I’m not inside their heads. I certainly hope they don’t feel my presence as pressure but as something positive, that can help them. I’ve experienced these competitions and I might be able to assist them.

Cédric Sorhaindo said that you might be the one taking a step back and may see things on and off the court, that players wouldn’t be able to see otherwise. What do you think about this statement?

NK:  I think I can, but I’ll try to do it without disrespecting the work of the staff.  If the staff says it’s OK for me to give some advice, I’ll be happy to do it. When you are in the heat of the moment, it’s not easy to take a step back.  The impression that you get on the pitch can be a wrong one. Maybe I can give a different look.

How did it feel to be in the stands, yesterday?

NK:  I was happy sitting in the stands and not on my couch! I’m used to it by now, as I’ve been watching games from the stands in Paris for the past two months. I don’t see it as a burden, as I’m happy to be with the team. For me to be here is already a success.

Didier Dinart didn’t want to answer when asked if you would play against Germany, on Tuesday. How do you see it?

NK:  We’ve got no plan. I’m here if they need me. Nothing is set in stone and things will depend on a number of factors.  First – how can I adapt to the team. We’ve got no deadline and at the moment it feels a little bit like an adventure.

Do you think your comeback can disrupt the preparation of France’s opponents?

NK:  The one thing I do know is that it (the comeback ed.) has upset the media and journalists. Yesterday, the Serbs asked me if I would be playing and I didn’t want to play mind games with them – I said ‘no’. I don’t know. When I’m not on the court, it can’t disturb them. Maybe it can have an effect on our team. With an Olympic qualification in mind, everybody has to deal with a lot of pressure in this competition, already.