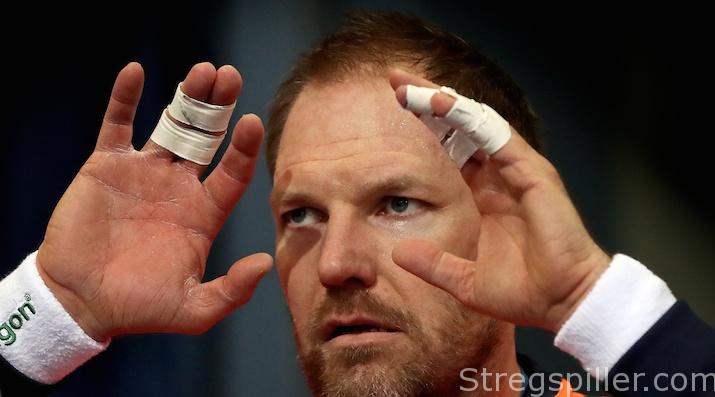 Flensburg’s Mattias Andersson is about to start his last season as a professional handball player.  This campaign will be his 17th, in Germany.  But according to him he is getting tired.  Actually, too tired, to continue on the same high level, he and his fans have come to expect. I talked with him about his decision, the new coach, teammates and his goals for this final season.

The new Bundesliga campaign is about to start, how has this preseason been for you?

MA:  Tough – as usual – but good as well.  We tried some new things, we trained a little bit different and it’s going well.

So you can see a difference in approach between Ljubomir Vranjes and Maik Machulla?

MA:  Yes, of course.  Every coach has a different approach and his own ideas.  In Flensburg we have something to build on, but some new things were added.

You decided to retire at the end of the season, why?

MA:  First of all I’ve been in Germany for a long time, it will be my 17th season.  It takes a lot of energy from you, both physically and mentally.  I did it all my life and I surely will miss a lot of things.  In the end, it will be tough, but I always wanted to finish on my own terms and not hear people saying, “I should have retired three years ago”.  Energy-wise it was already tough last season.

Do you think the energy you spent in the Champions League cost you the German championship last year?

MA:  No, I don’t think so.  We are used to stress.  A lot of things weighed in, for example the injury of Holger Glandorf, presented quite a problem for us.

What can you tell us about the new players?

MA:  They are all young guys and new in Germany.  They have to get a feel for everything first.  They have to learn the language and they have to experience to play the 20th game in November already.  And you are expected to win.  It’s a completely new situation for them and we have to help them.  But they are good guys, who are talented.

Would you agree that it will be even tougher to win the league title this season?

MA:   It’s difficult to say because it was already hard to win the title in the past.  Everyone should know that.  It takes a lot of energy.  You need some luck avoiding injuries and so on.  It will be a challenge – it could be even closer this season.

It might not only be your last chance to win the title, but also the last one for this team, which lost some key players and has grown older as well?

MA:  People often thought so, that there would be some sort of “fall-down”.  I think clubs like Flensburg have a big tradition and they will fight for trophies in the future as well.

Do you think there will be some sort of special moments coming up that you have to soak in, so you will be able to cherish it forever?

MA:  It’s not so easy when you are right in the middle of it.  I always wanted to enjoy the games and the special moments more.  But it’s so much at once, the work you put in, and always focusing on the next match.  That’s why you have a lot of memories once it’s all over.  But sure, I want to soak it in as much as possible.

What needs to happen to call your last season a success?

MA:  Difficult to answer because I’m playing for such a long time.  It often changes during the season. Injuries can occur, other things can happen.  So, it’s really, really hard to say.  If we give our best in every single came, fight united as a team, then it will be a success.