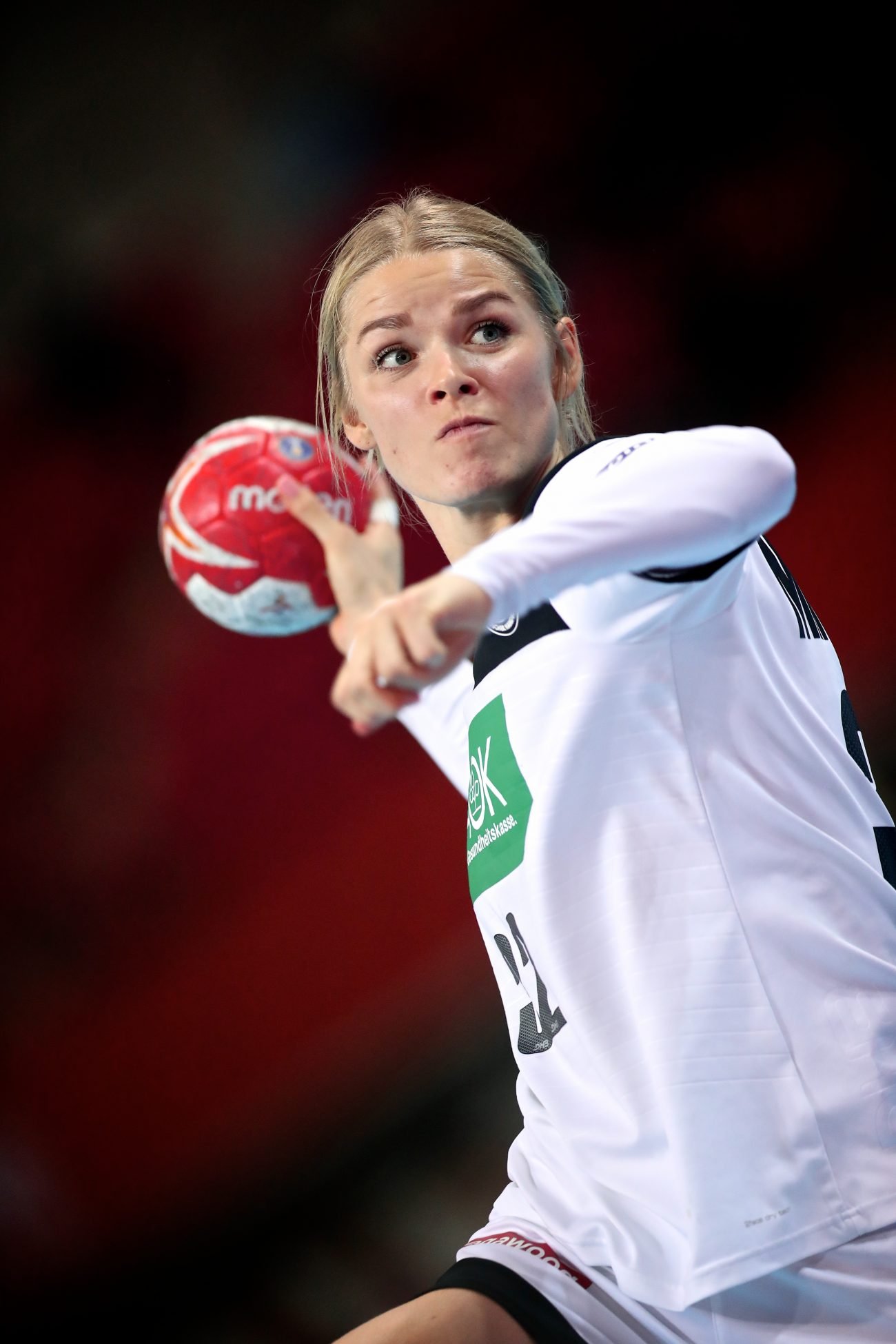 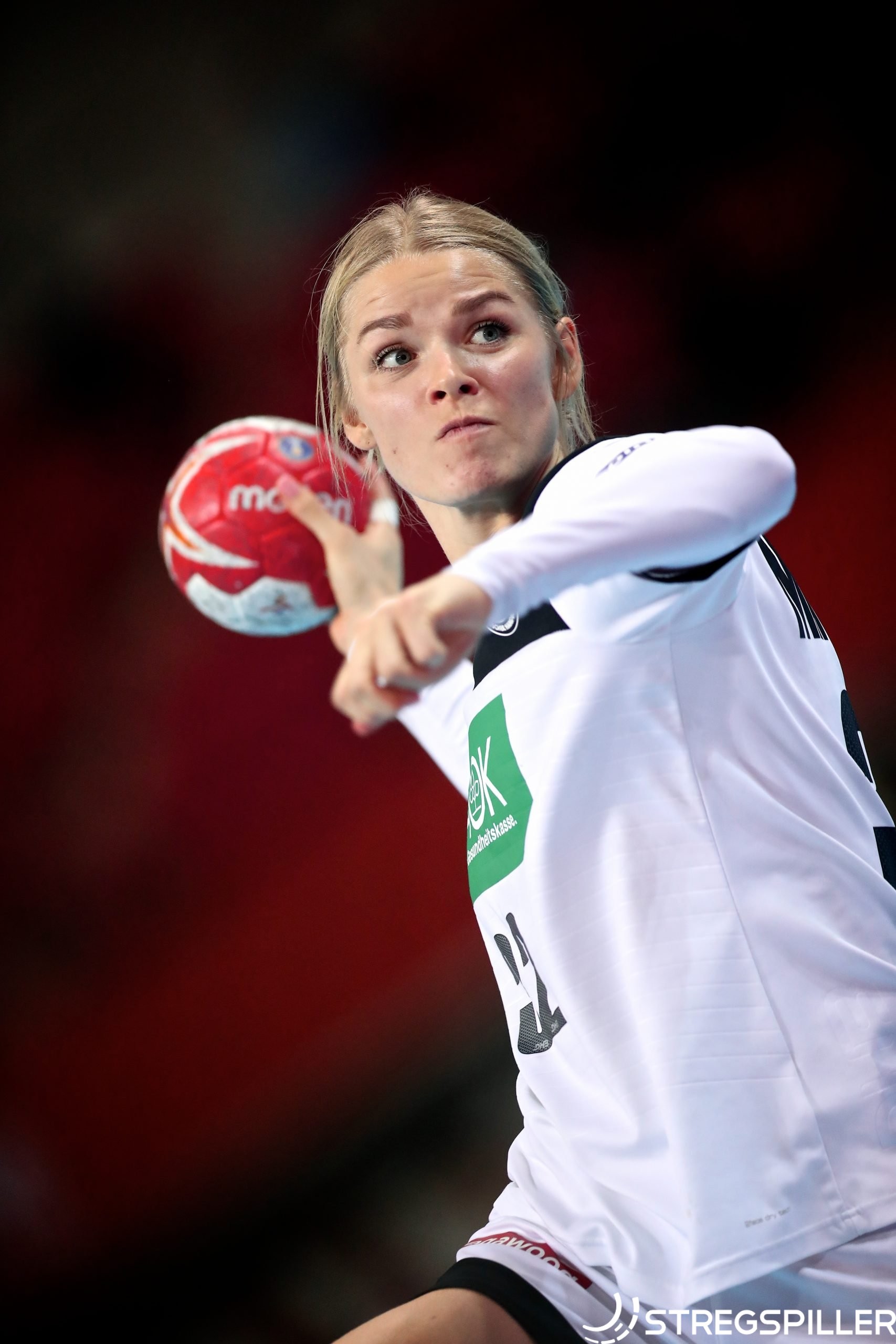 Before throw-off to the semi-finals in Kumamoto’s Park Dome on Friday evening, the match between Sweden and Germany will be in focus.  For Team Germany the outcome of this game will be significant as a win will guarantee participation in a qualification tournament for the 2020 Tokyo Olympics.

One of the players who will play a critical role to achieve this objective is Shenia Minevskaja.  Ever since joining Brest Bretagne Handball over the summer 2019, her form is trending upwards – a positive development that continues to show in the World championship in Japan as well.

She has been one of the most reliable players for her team and if there is a need to support the statement her stats from the 7-meter line speak for themselves.  So far, she has missed to convert on only one occasion from the penalty spot.

stregspiller.com caught up with Shenia Minevskaja on the day after Germany’s loss to Norway.

How have you dealt with the defeat against Norway as a draw would have taken you to the semi-finals in this World Cup?

SM:  Obviously, we were disappointed as we had everything in our own hands.  The semi-final was in front of us on a silver platter but we were not able to take this chance. Still, the match against Norway wasn’t key, we could have taken an easier path as it all started with the game against Serbia (Germany lost the match 28:29 earlier in the week ed.).  Of course, it’s frustrating but on Friday we can still reach our minimum goal (a win in the match for 7th place will secure a spot in a qualification tournament to the 2020 Tokyo Olympics ed.).

You had one of the toughest roads to the main round as Group B included some of the strongest opponents (incl. Denmark, France, Brazil, Korea ed.) and in the main round it did not look much different – did this schedule present a handicap from the very beginning?

SM: We knew the format from the very beginning. I went into this tournament knowing that that each team can beat each of the other ones and that we definitely had to deal with a very difficult group phase is out of question. As we crossed with Group A in the main round we knew that we had to deliver performances on the highest level.  It’s obvious that this schedule would take a great deal of energy – energy that we were missing in our last two games (against Serbia and Norway ed.).

How do you see the development of the team not only in this competition but over the course of the past two years?

SM:  Very positive! You can’t help but notice that Henk’s (Henk Groener, head coach Germany ed.) work with the team bears fruit and you can see how the team is developing in the right direction, not only in this tournament but last year as well.  We are no longer a team which can be pushed aside easily.

To the contrary – we have gained some respect and to all other teams we now present a real obstacle.  That’s something we can build on and it’s something that can’t be taken for granted.  We have worked very hard for it; every player is giving all they have and that’s how we function – euphoria and a fighting spirit is the foundation of this team.

Ever since you joined Brest Bretagne you can’t help but notice a different Shenia Minevskaja. How do you rate your own development not only in this World championship?

SM:  I smile at it and just say that breathing a different air in a different club works well for me.  Seriously, I am happy that I left Germany. There, I had gotten into a routine and dealt with some prejudices that had developed in my own head but also some prejudices how other viewed me. Now, I am far away from all of it.  For me it works really well and I can develop freely once again.  Everybody nows that in 2013/14 I enjoyed my top season and that’s already a few years back.  Thereafter, I went into a spiral and I found it difficult to get out of it. After my transfer to Brest Bretagne, it feels like I have regained freedom of some sort again.

Looking ahead – did you get a chance to study your next opponent, Sweden, already?

SM:  No, not yet.  We haven’t been able to see them live as they played in a different group. This evening we will watch some videos but what we do know already is that both teams want to win 7th place, there’s no doubt. After a day off, we hope that we will have recovered our strength and that we will be able to reach our minimum objective we set before the competition.

Who are the key players that you’ll have to watch out for in the Swedish team?

SM:  Even though “Bella” Gullden has just returned to the pitch after her pregnancy, she is the heart and soul of this team and her cooperation with the line players is something we have to pay attention to.  This aside, Sweden is well known for their fast paced attack and we won’t underestimate them.  No doubt it will be a tough match but we’ll try to unlock our euphoria and get loose from the get go. This is how we have played our best handball thus far.

Leaving your last match aside for a moment – on a lighter note what in Japan and this World Cup has left a lasting impression on you?

SM:  Well, from a typical German perspective I came to Japan thinking that all electric appliances would be a bargain, which they aren’t (laughing).  Also, the lights were not screaming in your face, not as much as you would have anticipated it and certainly not in Kumamoto. The people, the fans and the arenas I will keep in good memory and the same goes for the hotels and the food.  A circumstance that was less fortunate, especially during the group phase, was the fact that we had to commute from and to the arena for almost one hour. But, that’s something you can’t change anymore – it’s better to drive for one hour than having to deal with poor food (laughing).