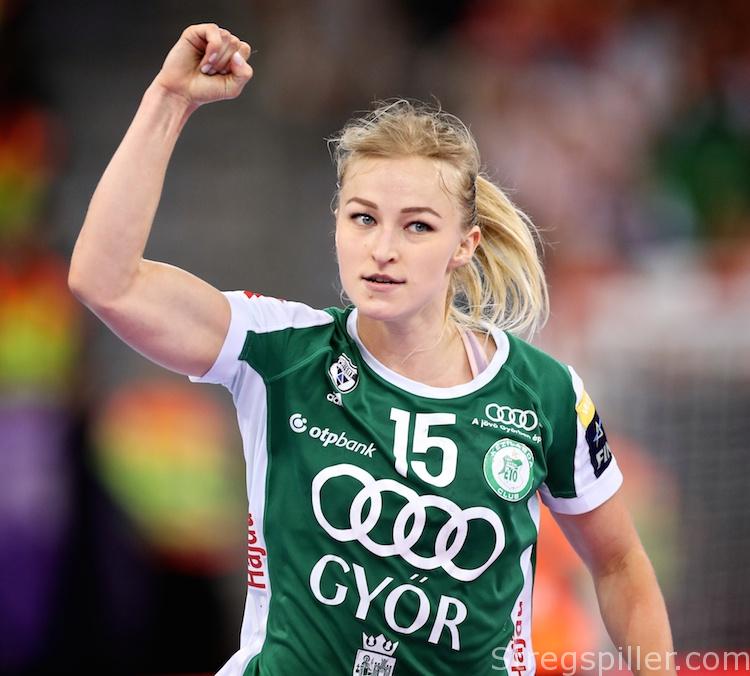 ZRK Buducnost were facing the first leg of the 2020/21 EHF Champions League quarterfinal without two key players (leftwing Majda Mehmedovic and playmaker Andrea Lekic), whereas all key personnel was on board for the Hungarian record champion.

19:30 read the scoreboard at the time the final buzzer sounded.  11 goals difference and it could have been an even larger deficit as the hosts were missing their signature qualities – intensity and a “never-give-up” attitude.

Only for a brief period in the first half did Buducnost show a glimpse of their fighting spirit before the five time Champions League winners pulled away for good.

The guests began the match with a concentrated effort, backed by a spectacular performance of Amandine Leynaud in goal (41% saves).  Soon the reigning champions enjoyed a four-goal advantage (7:3; 10th minute) before Radicevic & Co. clawed their way back into the game, getting within one (20th minute).

But, that was it.  Gyoer responded and at the half, the team of head coach, Gabor Danyi, were ahead by five once again.

Buducnost continued with Barbara Arenhart in goal, but the Brazilian international by herself could not change the momentum of the game.  Powered by a very motivated Stine Oftedal, Gyoer kept pushing and by minute 45 the Hungarians had opened a ten-goal lead for the first time.

Still, Gyoer continued to press the pedal to the metal until the very end, as Buducnost’s defense was no match for the speedy footwork of Oftedal and Nze Minko.

The absence of Majda Mehmedovic’s cannot explain nor excuse the lack of Buducnost’s intensity in the quarterfinal match against Gyoer.  Granted – the Hungarian record champions were a formidable opponent, but the way the hosts conducted themselves on their home court was out of character.

A concerted effort of Goerbicz & Co. was sufficient to pave the way for yet another FINAL4 appearance later in May.  Given Buducnost’s performance or lack there of, the second leg match in Hungary will become a pure formality despite the concerns of Stine Oftedal in her post-match interview.

“It was such an amazing fight – I was very nervous today. We know this team and how they are – they will fight until the very end.  So, we have to prepare again, get ready and try to play like we did today.  Hopefully, we will not repeat some of the mistakes.”

“First of all I am very disappointed that the game ended up with eleven goals difference.  At the end of the first half we did not have the power and did not match Gyoer’s experience.  Today we missed our fighting spirit, we did not play with our emotions like we usually do.  That was the biggest difference between the two teams.”