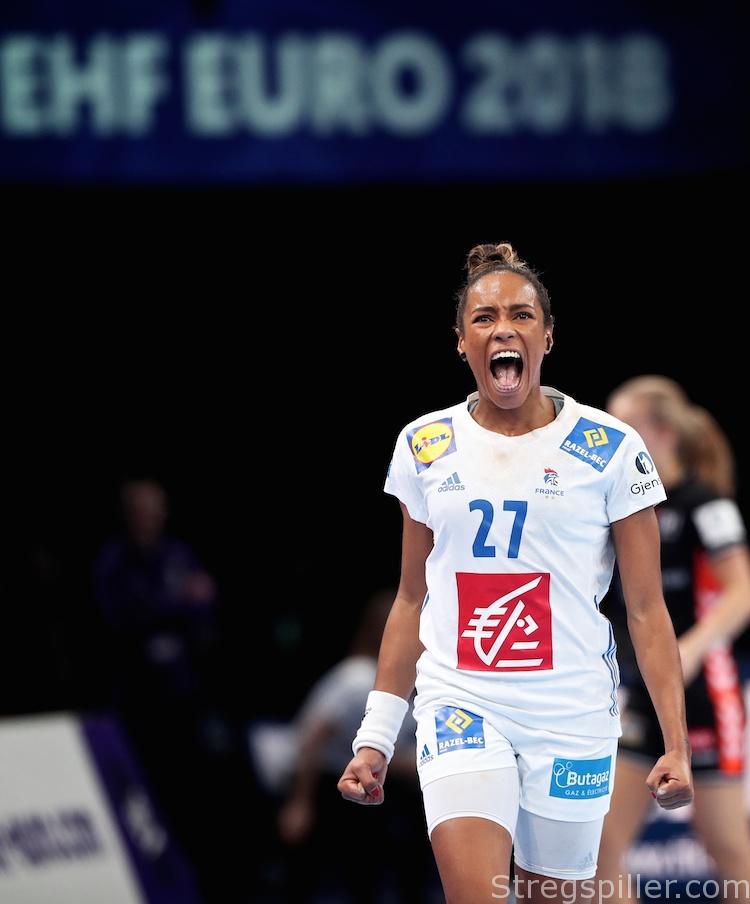 MATCH REVIEW – France are ready for their first European championship final ever, following a decisive win against the Netherlands.

*The Netherlands were in a major championship semi-final for the fifth time in succession, but could not win a title, yet.

*France entered home court as ruling World champions in addition of having won a silver medal at the 2016 Rio Olympics. The team never participated in a European championship final before.

*Leaving their 29:16 defeat in the main round, against Norway, aside, the Netherlands had played a very consistent tournament, thus far. Especially, when considering the loss of the two line players – Yvette Broch and Danick Snelder.

*France, in contrast, had a rather shaky start to the competition, losing 26:23 against Russia in the very first game, and later had to deal with a rather fortunate 21:21 draw against Sweden.

*A big question mark was behind Dutch playmaker, Nycke Groot, after a hit she took to the head in a main round match, just a few days earlier.

France only had some trouble just before the break. In the second half it did not take them long to create a meaningful margin of difference.

Two additional injuries during the game obviously did not improve the odds for the Netherlands, but given the powerful performance of France on Friday night, not much could have saved the Dutch.

Both teams began the match at a breathtaking pace and at times it seemed as if they were actually playing too fast for their own good, as technical mistakes added up.

Once players adjusted the tempo to their abilities, a really good game of handball unfolded, including several fine combinations.

Following one-goal leads for the Netherlands, France appeared to be taking control, when they turned a 2:3 deficit into a comfortable lead, via 6:3, 8:4 and 10:6.

In the process, French coach, Olivier Krumbholz, almost used his entire bench – mainly with success. In particular, Estelle Nze Minko was on fire, when France was in attack, scoring four goals on four attempts.

On the other side, head coach, Helle Thomsen, kept looking for solutions, how to deal with a lively French offense.

Still, towards half time, the Netherlands had somewhat caught up, trailing by one goal only.

The Netherlands started the second half as they ended the first, and it took them less than three minutes, to draw even (13:13), courtesy of Lois Abbingh.

Thereafter, the Dutch stayed in touch with France until 14:14, but four unanswered goals let the host built up a commanding lead (18:14).

Soon the scoreboard read 20:15, at which point, Helle Thomsen called her last timeout for the half – in the 44th minute!  It did not help.

The injuries of Martine Smeets and Jessy Kramer during the match certainly did not help to turn the game around – on this day France were simply too fast and too strong.

Eventually, France went up by eight goals (25:17) and the rest of the affair was managed in cruise control, before the crowd erupted in cheers and the celebrations began.

“I think we have improved a lot since our first match against Russia, in this championship.

“In the first match, we showed a really bad performance, and we were very unhappy with ourselves.

On Sunday, I am sure you will see a completely different game, where we will be extremely determined and will seek revenge for our defeat (two weeks ago ed.) and win the European championship, for the first time.

“I can assure you that it’s no fun to lose a semi-final in a big championship, but we cannot allow the disappointment to ruin our preparations for the bronze game.

“We will allow an hour or so to be sad, but then we will begin preparing for the 3rd place match, which we very much want to win.

Winning bronze would be fine for us, considering the team we currently have.”

For France, it’s all about getting ready for the final and their second meeting with Russia at this European championship, whereas the Netherlands will try and earn another bronze medal when meeting Romania, on Sunday afternoon.