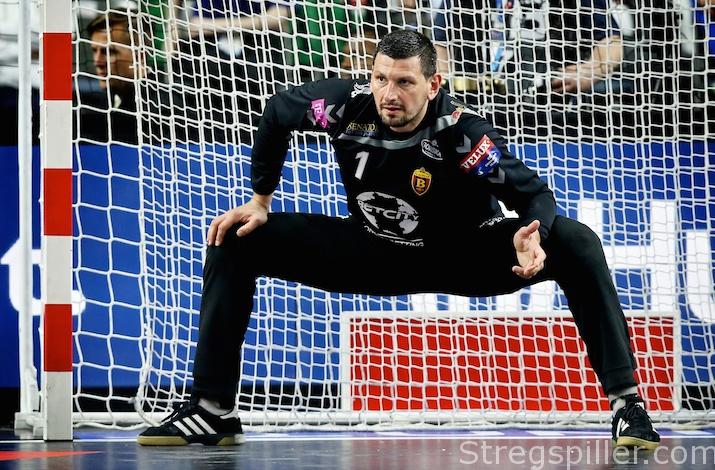 Last but not least, I turn to the goalkeepers, their performances and the way I measured them.

# 5:          Gonzalo Perez de Vargas (Barcelona and Spain) surely is one of the premier goalkeepers around. He is quick and agile, physically not as imposing as others, but he puts on a good performance most of the time. Maybe his level is not comparable to his closest rivals yet, but he hardly had an off-day. Although he is still rather young, at age 26, he already won two Champions League trophies. Today, he is a key player on the team, and offers plenty of experience on the highest level.

# 4:          Vincent Gerard (Montpellier and France) had the season of his life in 2016/17. He was the main reason why France never really stumbled en route to winning the 2017 World championship title back in January. His game is quite similar to the one of Perez de Vargas, but his impact last season was much more significant. Gerard was named “Best Goalkeeper” of the tournament in France and impressed regularly leading his club to a surprise upset of defending Champions League winner Vive Tauron Kielce.

# 3:          Andreas Wolff (THW Kiel and Germany) represents the future of goalkeeping in Germany – no doubt. He had an extraordinary 2016 and his move from Wetzlar to Kiel went smoothly, at least when looking at it from the outside. He saw more time on the court compared to Niklas Landin, but he still began to complain after the season and affirmed his image of being an outspoken character in a number of  interviews. As long as his performance stays on a high level, he can get away with it – for now anyway.

# 2:          Niklas Landin (THW Kiel and Denmark) is an absolute star and about to enter his prime years as a goalkeeper. Ironically, he left Rhein-Neckar Löwen to lift the trophy as German champion, only to see his former club win the title twice since he joined Kiel.  Still, he was became “Goalkeeper of the Year 2017” in the DKB Handball-Bundesliga and for a reason. On the club level he claimed number one status in the crucial matches in the Champions League and he was instrumental in Kiel winning the German cup final.

# 1:          Arpad Sterbik (Vardar Skopje and Spain) was the best goalkeeper during the most critical part of last season and a key contributor in Vardar’s spectacular run, winning the Champions League title.  Yes, he is the oldest one on the list, but this doesn’t matter, as his performances in Cologne showed.  He can still “shut the goal” at any time and he might be the most imposing goalkeeper in the history of handball.  Even more impressive – it doesn’t look like he is stepping aside any time soon.

As the list allows for only five players some names might be missing.  As mentioned before my ranking is quite subjective, but who doesn’t enjoy a bit of controversy here and there?  Yes, Thierry Omeyer didn’t even make my Top 10, and I think he has seen much better days.  Some players I would have liked to make the list, but I think they will have better chances next time around.