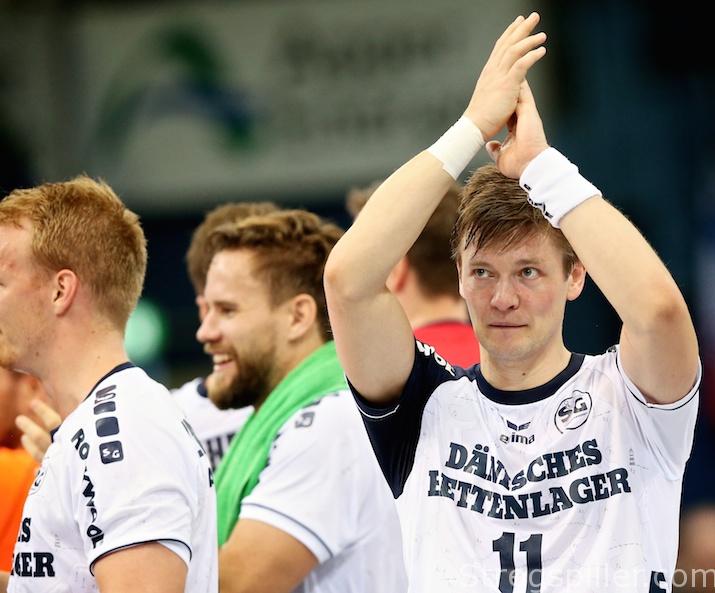 From the left side we move over to the other wing, where it’s possible to choose from a long list of excellent players. That’s why my picks are probably very debatable, to say the least. I had to subtract various stars. First, let’s see who made the cut before we get to the ones who didn’t.

# 5:          Patrick Groetzki (Rhein-Neckar Löwen and Germany) is a very underrated player, at least in my opinion.  First, he “sufferered” from being the other homegrown winger in Mannheim, next to Uwe Gensheimer.  And secondly because of his club’s image of losing crucial matches and him missing big shots when the game is on the line.  But his self-confidence and believe in his abilities has risen drastically since the “Lions” won back-to-back titles. He also improved on the defensive end and is the silent leader of the team.

# 4 :         Kristian Bjørnsen (HSG Wetzlar and Norway) had his break-through campaign in 2016/17. He made the move to the German league and didn’t need any time to adapt to the speed of the DKB Handball-Bundesliga, making the All-Star team at the 2017 World championship.  My fear – the club won’t be able to hold on to him for long, because he will be one of the best right wingers for years to come.  He has (almost) no weaknesses and plays consistently on a high level.

# 3:          Niclas Ekberg (THW Kiel and Sweden) doesn’t get the credit he deserves, maybe because his club team is packed with big names. But I would go as far as calling him the best player in Kiel last season.  As his “running mate”, Christian Sprenger, was about to end his career Ekberg took over as the team’s first choice on the  right-wing position.  The trust his coach Alfred Gislason placed in him paid dividends game after game.

# 2:          Gasper Marguc (Telekom Veszprem and Slovenia) is a great guy to talk to, but first and foremost he is a fantastic player.  He is extremely fast, has a quick first step and a huge variety of shots to choose from.  Learning from his long-time buddy Dragan Gajic, first on the national team and now in Veszprem, helped his development for sure, as Marguc continues his country’s tradition of producing world-class players on the right wing.

# 1:          Lasse Svan (SG Flensburg-Handewitt and Denmark) can score, and he can score in bunches and he doesn’t even shoot penalties.  That doesn’t stop him from lighting the lamp, as they would say in ice hockey.  I still remember his performance during the Olympics, especially the semi-final, when he converted on all of his nine attempts against Poland.  He continued his form during the remainder of the season and proved his skills not only in the DKB HBL, but also in the Champions League and with the national team.  I still think many opponents underestimate him, although there is no real reason.

Honorable mentions in no particular order: Dropping Victor Tomas from the list, seriously? Why? Because I have seen him play on a much higher level.  So Victor, should you read this, I still rate you as a premier player, but I have at least as high expectations as you do.  Kudos also to Robert Weber, another star – but not playing in the Champions League and neither participating in the Olympics nor the World championship didn’t leave me much of a choice.