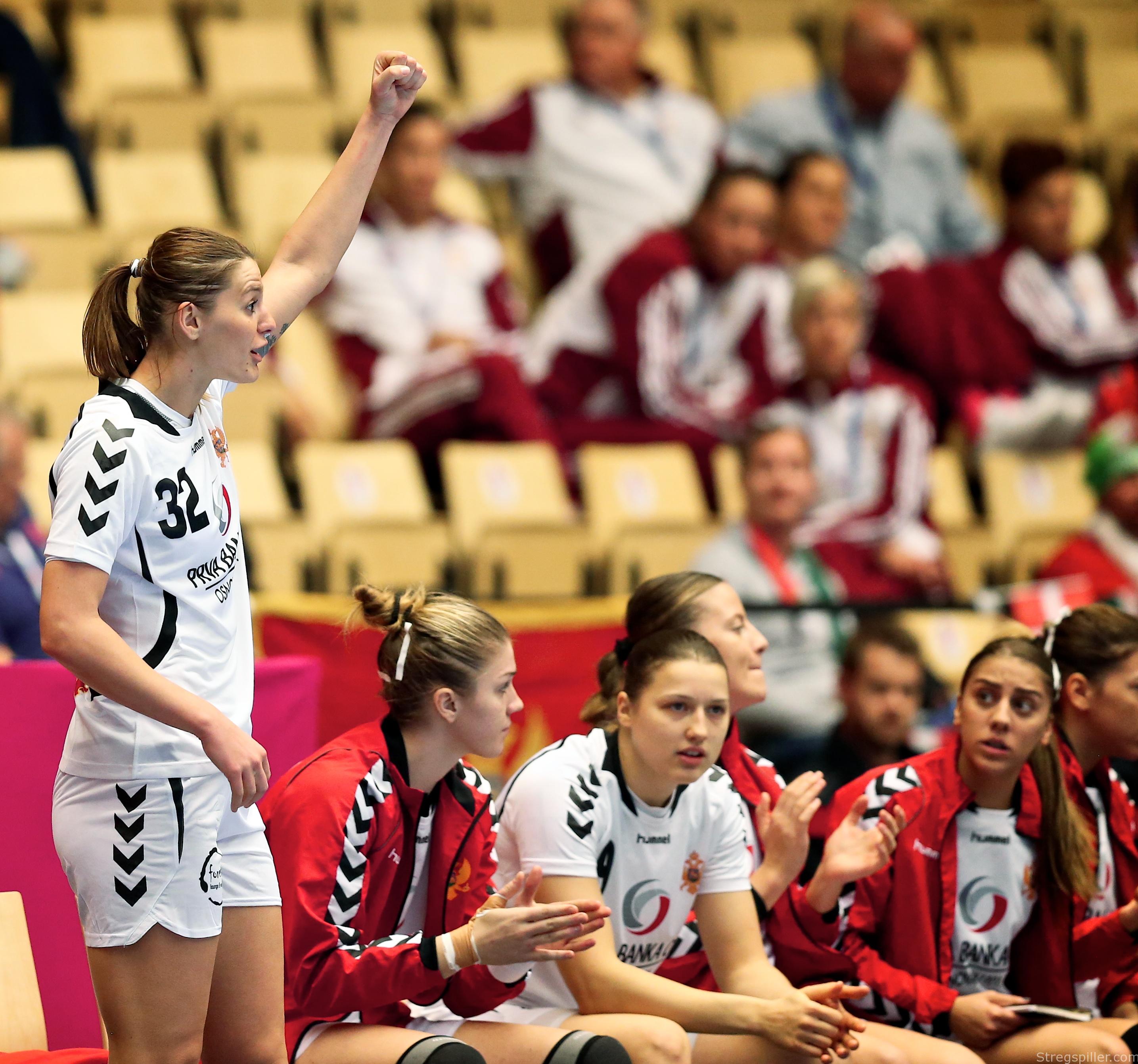 Game three of this year’s World Cup would present Denmark with the strongest challenge yet – Serbia, the vice-World Champion of 2013. Many thought that the Balkan team would be one of the three push-over squads in Group A after the departure of playmaker Andrea Lekic and three more star players (Cvijic, Damnjanovic, Tomasevic) that formed the backbone of the squad that won the silver medal on home ground, two years ago. Yet, the young team from Serbia was able to surprise on the upside – certainly in their opening match vs. Montenegro.

Denmark, in comparison, had two easy matches against Japan and Tunisia, allowing for a gradual warm-up for bigger and more difficult tasks that lie ahead at World Cup ’15.

Serbia took the quick lead before the encounter turned into the Stine Jorgensen show.  The Player of the Match of Denmark’s previous two World Cup matches was on fire and scored four of her five goals before the 10-minute mark was reached.  Her run came to an end when she missed on a penalty shot, shortly thereafter.  Thankfully, right-back, Line Jorgensen picked it up where Stine Jorgensen left it off.  The backcourt player would become the dominating force until the end of the game – pure power.  On the other end of the court, it did not look quite as good for the team in red and white.  Denmark’s central defense was struggling, and again and again, Serbia’s players were able to place uncontested shots past Sandra Toft, who started in goal.  Especially, Katarina Krpez and Kristina Liszevic took advantage of some huge gaps in Denmark’s defense, keeping a tight result at halftime.

The second period saw a Danish squad jump-starting the match.  Line Jorgensen & Co. outscored their Serbian counterparts 5:1 until the 36th minute – the game was decided.  A red card to K. Liszevic (3×2 minutes) did not help Serbia either.  At the time, the squad of head coach Sasa Boskovic did not only lose their top scorer (5) but playmaker as well.  It all went downhill from there as Pernille Holmsgaard and her teammates tightened up in front of goalkeeper Rikke Poulsen while ravaging Serbia’s defense formation.  At 29:20 Denmark’s scoring spree came to a halt.  Three games – three victories for Klavs Bruun Jorgensen’s squad. So far, so good.

Hard to argue with the official decision – Line Jorgensen showed a powerful performance on this 8th day of December, in Herning’s “Jyske Bank Boxen”.  If she can preserve her current form it will be tough to avoid her name, by the time the All-Star Team for World Cup’15 is selected – always assuming that she will take her teammates deep into the tournament.

Hands down, Katarina Krpec’s goal, courtesy of a behind-the-back pass of Kristina Liszevic was the highlight of the game

One word comes to mind – electrifying.  The atmosphere at “Jyske Bank Boxen” was outstanding once again.  The ongoing support will be needed as Denmark’s finest handball players are working their way to a 1/8 final on December 13th at the same location.

Group A – How did the competition do?

To no surprise, Japan was able to book their first victory at the World Cup – (31:21 over Tunisia) and the team from Montenegro showed their game face when trashing Hungary 32:16. Make no mistake – Katarina Bulatovic, Milena Raicevic & Co. are alive and kicking.

While Spain could not really be judged by their easy win over Puerto Rico in their opening match, they actually played brilliant handball in the second game against Russia, despite losing 28:26. For Romania it was a first true reality check – the first two opponents were, by far, the weakest teams in the group, Kazakhstan and Puerto Rico.  Yet, Spain was under the heavier pressure after having lost two points against Russia.

Romania dominated the first half hour, but Spain won it. The squad of head coach Tomas Ryde got the better start, mainly because of a brilliant Paula Ungureanu in goal and a brilliant Cristina Neagu on the other side of the court. Ungureanu performed one magnificent save after the other, and Neagu scored more or less as she pleased. Romania’s rhythm of the game got interrupted once Spain´s coach Jorge Duenas pushed the right side of his defense forward.  It also helped that Darly de Paula was tending the goal – she replaced Silvia Navarro who started the game. Actually, Spain made two comebacks during the first half. The last push back came courtesy of Nerea Pena, when she scored the equalizer at 12:12. Nely Alberto provided Spain with their first lead in the match, making it 13:12 on a penalty after the half-time buzzer.

The second half saw a complete reversal of fortunes. A late advantage in the first thirty minutes of play had given the Spanish team wings – and stunned Romania. While goalkeeper Ungureanu had been dominating the match for most of the first half, now it was Darly Zoqbi de Paula´s turn. Her saving percentage rose to an amazing 60 while Spain scored the first three goals of the second half, increasing their lead to 16:12. The team from the south of Europe would not look back.   A timeout called by Romania´s coach Tomas Ryde did nothing to help his team. None of his measures worked anymore as Spain cruised to a surprisingly high, eight-goal win.

Darly Zoqbi de Paula takes the award in close competition with Nera Pena and Alexandra Barbosa.  De Paula´s saves from the moment she entered the court were a game changer.

Battle of the Coaches

Jorge Duenas wins this one – clearly. His decision to move two of his players forward on Neagu´s side disrupted the game of Romania. His – surprisingly passive – adversary Tomas Ryde never found a solution against this tactical move.

Spain provided another good reason why they are a squad to be reckoned with at this World Championship.  A very flexible defense and a fast and inventive style of attack will cause lots of trouble for any opponent.  Romania, on the other hand, will have to worry where the team actually stands. So far, the only points that have been won were against the two underdogs of the group – Kazakhstan and Puerto Rico.

How good is Romania really?  The answer to this question will be provided by Norway, the next opponent of Neagu & Co.

Having faced both finalists from last year´s European championship in the opening rounds of Group D, it was Russia´s turn to have an easy match.  In an attempt to at least turn the game against Puerto Rico into a meaningful training session, Evgeniy Trefilov practiced various defensive formations.  Let’s hope Russia won’t see the need for a double man-to-man defense in a tight match – this defense variation will certainly require some more training.

Just as expected, Norway ran over Kazakhstan and the only thing worth mentioning is the fact that all four teams that will play in the eight finals are known already.  Well ahead before preliminary play in Group D comes to an end on December 12. Russia, Spain, Norway and Romania are all moving on.