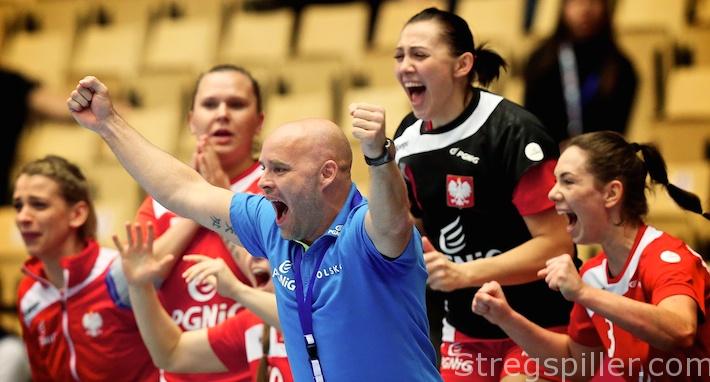 The participants in the quarter-final matches at World Cup 2015 in Denmark have all been determined.  Poland, Montenegro, France and Russia have joined the round of “final-eigth”.

Poland accomplished a big surprise and send Hungary out of the tournament through a narrow 24:23 win after a close and thrilling second half with changing leads

Hungary came into the game courtesy of a second place in Group A that included an impressive victory against host Denmark and a disastrous 32:15 loss against Montenegro. Poland had shown some inconsistencies in Group B, but still managed to qualify for the knockout rounds from third position.

The most remarkable incident in the first 30 minutes was a sad affair.  After 21 minutes, Hungary’s back-court player Zsuzsanna Tomori hit the floor screaming with an apparently serious knee injury. Yet, Tomori´s accident did not stop the Hungarians doing what they were doing at the time – catching up with a clear Polish lead after a terrible start to the game.  Poland went ahead 10:4 and 11:5 and only after two timeouts of Hungarian coach Andras Nemeth did the Hungarians start to cut down the deficit.  The fact that Nemeth pushed his defense a good bit forward, played an important part, as Hungary scored no less than eight goals in succession, moving from an 11:5 deficit to a 13:11 lead.

It took about five minutes before the first goal was recorded after the break.  Left-back Szandra Zacsik logged the score at 15:13 in favor of Hungary but Poland was far from conceding defeat.  Kinga Achruk was moved forward to play a 5-1 defense formation – a successful decision by coach Rasmussen. Poland came back and changed a 17:14 deficit into an 18:17 lead.   Still, Poland appeared to have the initiative, as they also managed to disturb the Hungarian attacking play for a while including a woman-to-woman defense on Hungary’s playmaker Zita Szucsanski.   Things did not get easier when Hungary got hit by another injury.   Anita Görbicz had to limp off the court with less than nine minutes left to play.  In the end, Poland could celebrate a one goal win.

Surprisingly, Hungary will have to fly home after the eighth-finals already. The bronze medal at the 2012 European Championship in Serbia remains the best achievement of the team in recent years.

Poland is in the quarter-final – an unexpected development considering the many absentees.  In the match against Hungary, Poland managed to significantly tighten their defense when compared to some of the earlier games and if they can repeat this impressive performance, the journey of Kim Rasmussen’s squad may continue longer than most expect.

In short – Montenegro lived up to the status of favorite and qualified for the quarter-finals without having any problems defeating Angola – the only nation from Africa in the 1/8 finals.

Probably only the squad from Angola and their most die hard supporters believed in a loss of Montenegro – the winner of Group A and a team that has shown continuous improvements after a slow start to the tournament.

Montenegro was set to steamroll Angola from the start.  It took the Montenegrins less than four and a half minute to get up by 5:0 and it did not take them much longer to get eight goals ahead at 10:2.  The aggressive Angolan defense – a 5-1 or 4-2 formation most of the time – was no match for the Montenegrin attack.  Right-wing Jovanka Radicevic and right-back Katarina Bulatovic scored six goals each before the break already.

Spectators always have a tendency to show their sympathy for the underdog and it was no different at Jyske Bank Boxen, where most of the 2,00 spectators that had found their way to the arena, supported Angola.  But it was the few and vociferous Montenegrin fans who celebrated in the end. Their heroines continued to dominate the opponent in a second half that passed by without much intensity.  The only question remaining was of the size of the result in favor of Montenegro.

The win sets up Montenegro for the quarter-final game against Norway on Wednesday – a re-match of the 2012 Olympic final and the dramatic final at the European Championship in Serbia that same year.  Possibly, the most competitive encounter of all the quarter-final fights at World Cup’15.

France is ready to meet the Netherlands in the quarter-final after narrowly eliminating the silver medalists of the last European Championship, Spain, after a thriller in Kolding.  Monday´s other eight-final never turned into a shocker, as Russia was leading by nine goals, before allowing Korea to get into the game.  Next, Russia will be up against one of the surprises teams of this tournament, Poland.