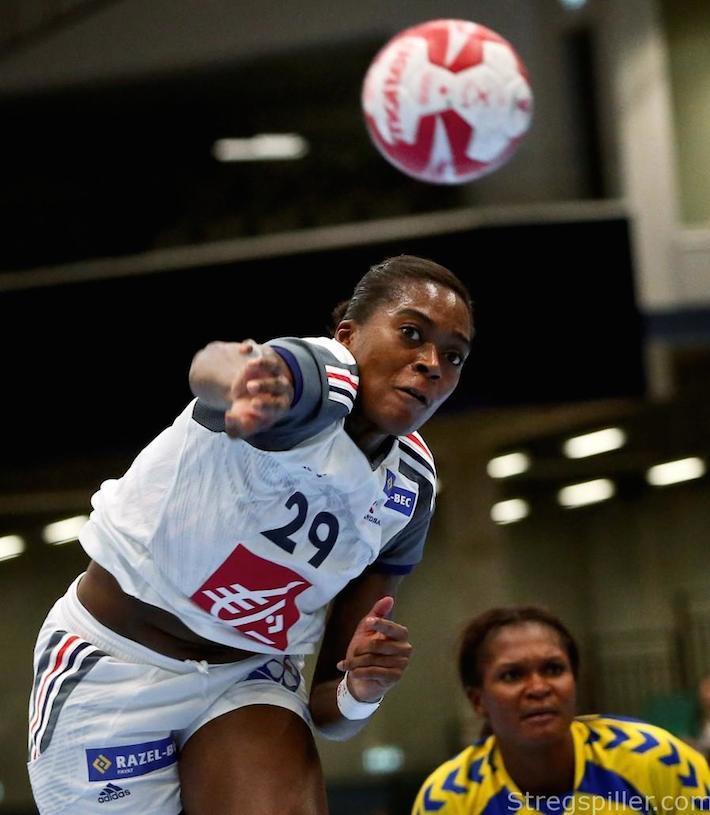 The Champions League game between the Fleury Loiret and Thueringer HC was a sad reminder of the terror attacks in Paris on November 13, 2015.  In the aftermath of the heinous crime, the match was cancelled and re-scheduled for January 6, only three days before the Main Round of Europe’s premier club tournament would begin.

Fleury was looking to stage a strong response following a surprising loss at home against LFH’s newcomer, Besancon, while Thueringer HC was traveling to Orleans after a successful campaign against TuS Metzingen in Germany’s HBL.  Both clubs made changes to their respective roster of players over the Christmas holidays.  French right-winger, Audrey Deroin had joined Thueringer HC on a short-term contract while Audrey Bruneau returned to Fleury replacing Beatrix Fernandez.  Both players left defunct Union Bègles Bordeaux – Mios Biganos.

At the end of the match Fleury’s coach Frederic Bougeant was celebrating a 27:21 (10:12) victory of his team over the German champion but the success did not come easy and the winning margin masked some serious deficits of the French squad.

Following a quick Fleury lead, Thueringer HC took over, establishing a five-goal advantage by the 20th minute.  Coach Mueller had his team well prepared for Fleury’s powerful back-court stars. The efforts of Gnonsiane Niombla and Aleaxandrine Barbosa were met by a very well-organized Thueringer defense, courtesy of Danick Snelder and a sharp performance of Dinah Eckerle in a goal.   The rhythm of the game changed when Julie Foggea replaced Darly Zoqbi de Paula between Fleury’s goal posts.  Coach Bougeant’s crew improved defensively and on the other end of the court Niombla made sure that her club’s deficit would shrink to two goals before the half-time buzzer sounded.

Fleury continued where they left off and by the mid-point of the second half, Niombla & Co. had tied the game at 18:18.  The German crew would regain the lead one more time before their execution skills would fade.   Coach Mueller’s squad would only score on two more occasions in the last 15 minutes of the match – not enough to seriously challenge the French champion en route to their 2nd Champions League victory.

15 turnovers committed by Thueringer HC help explaining the development of the game and final result.  Add to it a good number of unforced errors and it does not bode well for the upcoming Champions League match in Larvik against the freshly minted Norwegian Cup winner – a team that is accustomed to play at a fast pace.

Next to Niombla’s superb offensive accomplishments (9 goals), Julie Foggea’s performance in goal stood out.  When she took over from Zoqbi de Paula the dynamic of the game changed for good. In the final 20 minutes of the match Foggea allowed only four German goals – it does not get much better than that.

For the most part Marija Ilieva and Silvana Karbeska had the game well under control.  If anything the two referees from Macedonia allowed both team’s ample time to set up their position plays, often without generating much (if any) pressure on defense – much to the dismay of coach Mueller in the latter part of the second half.

Thueringer HC won’t have much time to dwell on the dismal result in Orleans.  The 2015/16 Champions League Main Round kicks off on Saturday already against Norway’s handball powerhouse – Larvik HK.  On Wednesday evening, the team of head coach Tor Odvar Moen enjoyed a leisurely win (34:23) on the road against Oppsal, in Norway’s “Grundig” league.  Expect Gro Hammerseng-Edin & Co. to step up their game significantly at Bolligmappa Arena.  The first half at Oppsal was not exactly an eye opener.

Fleury will find their way to Baia Mare (Romania) to meet fellow countrywoman and top Champions League goal scorer, Allison Pineau.  Baia Mare is in urgent need of something tangible as the club enters the Main Round with zero points for a second year in a row.  Belated Christmas gifts are out of question and it will be a noisy welcome when Fleury takes the court at Sala Polivalenta Lascar Pana, on Sunday.