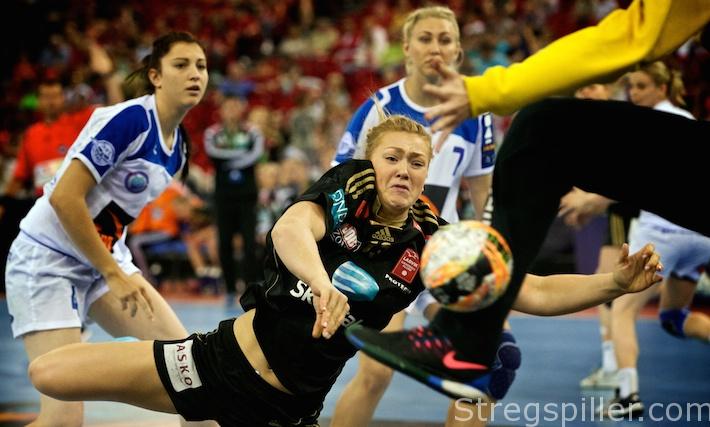 Match of the  Day

FTC Railcargo won a hard fought match against Norway’s champion, Larvik HK, courtesy of a brilliant performance of Nerea Pena and some spectacular saves of goal-keeper Melinda Szikora when it mattered most. All in all a deserved win.

Larvik arrived in Hungary’s capital without recuperating Danish goalkeeper Sandra Toft, leaving Alma Grizovic with the responsibilities of last defender. FTC Railcargo’s was at full strength and Gabor Elek presented the same squad that had lost for the first time in the 2015/16 Champions League season against Rostov-Don, one week ago. At stake – two important points in order to secure the number two spot in Group 1.

Once again Larvik’s head coach Tor Odvar Moen had tapped Kristine Breistol (left-back) to start the game instead of the more experienced Anja Hammerseng-Edin. Both teams began slow and were tracking each other closely. But half way through the first period, FTC’s Spanish back-court star, Nerea Pena, had arranged for a more comfortable four-goal lead. Unlike the rest of her teammates Pena had a rocket start to the game, scoring six of FTC’s first ten goals. On the other end of the pitch both crews showed-off their defensive skills, except Larvik’s keeper Alma Grizovic had a difficult time to get her hands on the ball. By the time the two teams changed sides, her savings rate stood at a dismal 14% – a number that mirrored Larvik’s half-time score (19:14).

Pena & Co commenced the second half of the match where they left off, scoring twice before FTC’s goalkeeper Melinda Szikora would take center stage. In short order, she stopped several wide-open shots from Marit Malm-Frafjord and denied Amanda Kurtovic and Anja Hammerseng-Edin from the 7-meter spot at a time when her team was struggling offensively. The addition of Karoline Dyhre-Breivang had raised Larvik’s level of defense and a much-improved Alma Grisovic did her part. If it would not have been for the many missed opportunities, coach Moen could have witnessed a remarkable turn-around. But once again it was Nerea Pena who showed up when her mates needed her most, providing two timely goals (25:20). Three minutes before the end, the game was decided and the final scores of Frafjord and Solberg could not do much damage anymore.

Nerea Pena’s performance (shooting 9/13) was exceptional throughout the match. Whenever Larvik was getting a glimpse of hope to cut the deficit in a meaningful way she was there to shut the door again. Like Larvik’s Grizovic, Melinda Szikora’s presentation during the first 30 minutes of play was sub-par (24% savings rate) but her game-changing parades between minutes 35-40 especially, made up for that.

Nora Mork vs. Nerea Pena. Like Pena, Larvik’s World Champion was the high scorer of her team but most her seven goals came from the 7-meter line. Mork was perfect converting all of her penalty shots (6/6) but the Spanish all-rounder was everywhere and did everything – successfully and in a class of her own on this Saturday afternoon.

FTC’s players were suspended for 14 minutes vs. Larvik’s two but the Norwegian champion could not take advantage.

A tough call. Gabor Elek and Tor Odvar Moen had prepared their teams well for this important match – on the defensive end in particular. Elek had options, Moen not as many. Sandra Toft was dearly missed, especially during the first half when Szandra Zacsik, Zita Szucsanszki and the ubiquitous Nerea Pena scored at will from distance. Tor Odvar’s move to start Kristine Breistol did not pay off as hoped – Larvik never got their chance to run extended counter-attacks in order to capitalize on one of Breistol’s strengths.

Tor Odvar Moen: “Next time when we meet, we will show them that we are better.”

In three week’s time Larvik will face French champion, Fleury Loiret, in a “must-win” game at home while Coach Elek’s squad will pay a visit to one of the more noisy arenas in the women’s Champions League – Baia Mare.