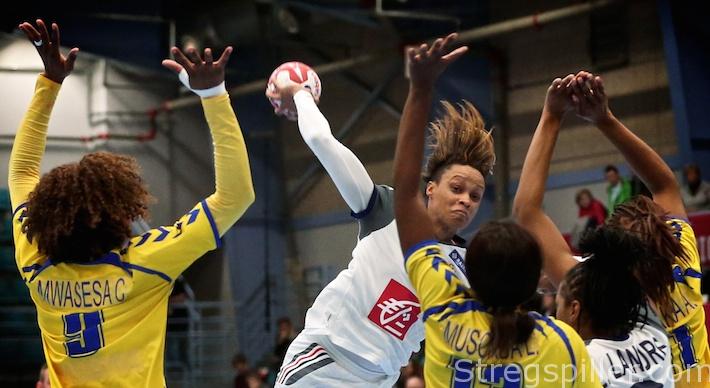 Baia Mare extended their winning streak to three, while FTC Railcargo recorded their second loss in the 2015/16 Champions League season.  Another outstanding performance of Nerea Pena (9 goals) was not nearly enough to keep the Romanian club at bay.  The squad of head coach Aurelian Rosca secured a deserved 32:24 (16:14) victory against the Hungarian champion.

Three weeks ago FTC Railcargo beat Larvik HK in convincing fashion on home turf.  A very concentrated and agile defense effort paved the way to success back then.  None of that was on display when coach Elek’s team took the court on Friday evening in the capital of Romania’s Maramures county.  FTC’s offensive minded defense formation was too slow to keep pace with Baia Mare’s aggressive back-court players. Especially, left-back Gabriela Perianu and Valentina Elisei on the left wing stuck out.  Both players were instrumental in building a two-goal lead until the 15th minute.  Only Spanish all-rounder Nerea Pena kept the Hungarians in striking distance while the rest of FTC’s back-court was struggling against a very well positioned 6:0 Baia Mare defense and an excellent goalkeeper Paula Ungureanu.  Still, at half-time Pena & Co were only trailing by two.

After a slow start to the second half by both clubs, Allison Pineau quite literally took over scoring on four consecutive occasions and by the 45th minute Baia Mare had achieved a five-goal lead. While Pena tried her best to keep her team in the match, FTC’s other back-court players, Szandra Zacsik, Zita Szucsanszki and Dora Hornyak had taken the “day-off”.  Baia Mare outscored the club from Hungary 8:5 during the remaining 15 minutes and cruised to a victory that never was in serious jeopardy.  Following her injury, Lois Abbingh saw some more time on the floor in the closing minutes of the game, adding two goals of her own.

91% – Allison Pineau’s shot efficiency was almost perfect and matched her excellent performance on both ends of the pitch – once again.  Unlike FTC, Pineau’s form curve continues to trend upwards – sharply upward one might add.  The French playmaker is the key player at the Romanian club that now appears to be well on its way to the Champions League quarter-finals.

Number of the Match

32- for the first time this Champions League season, FTC Railcargo had to absorb more than thirty goals.  Is Gabor Elek’s admired defense fading, now that Europe’s elite teams are entering the critical phase of the main round? Three tough games in the month of February will provide the answer where the crew from Budapest really stands.

Allison Pineau & Co. will make a trip to France visiting Fleury Loiret.  No doubt given the Romanian team’s most recent performance they will enter the competition as the obvious favorite.  Can Niombla, Kamdop et al contain Baia Mare’s French star player? From today’s vantage point the answer is – no.  At the moment, nobody seems to be able to stop the World Handball Player of the Year 2009 in her tracks but do the rest of her teammates play along?  A healthy Lois Abbingh will certainly provide much welcome relief.

FTC is going to head home to Budapest and await Jan Leslie’s Rostov-Don, the only team that remains unbeaten in the 2015/16 Champions League edition.  The question “Quo Vadis FTC” will be answered on February 13th.  Nerea Pena won’t be able to carry the squad all by herself – support will be needed but will it be given?  Baia Mare demonstrated how to shut down FTC’s marveled back-court on Friday night.  Coach Elek will have to develop more options, involving line- and wing players, to protect home court.