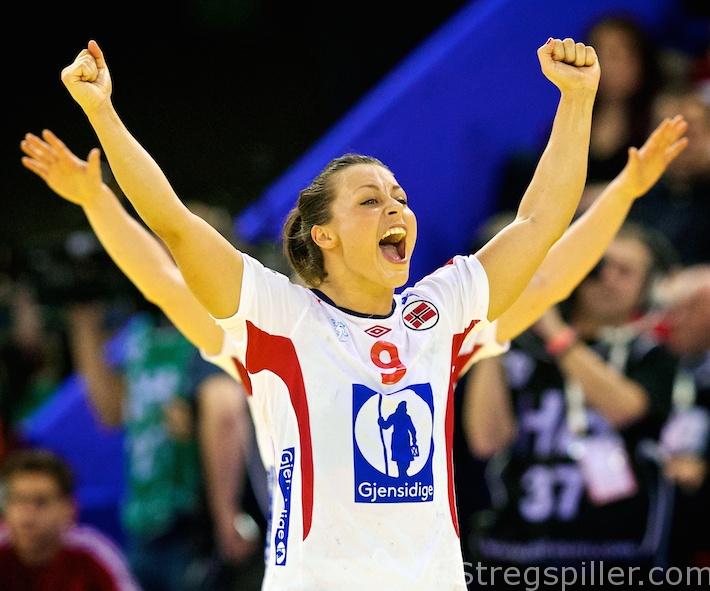 One Mork Not Enough

Sporting a three game losing streak in LFH (Ligue Feminine de Handball) and not having won a single match during the main round of the EHF Champions League yet, Fleury Loiret looked like an easy target on the outset of their visit in Larvik.

The team of coach Tor Odvar Moen in turn had assumed the number one position in Norway’s “Grundig” league once again, after disposing of their closest rivals Tertnes (Bergen) and Byasen (Trondheim) in the past few weeks.  The day before the encounter against the French champion, Champions League rival, Baia Mare, had beaten FTC Railcargo; presenting an important opportunity for the squad from Norway’s Vestfold municipality in their quest for the number two spot in Group 1.

With the exception of long term injured Alina Wojtas and pregnant Linn Kristin Riegelhuth-Koren (Larvik) both teams could present their strongest lineups, including Larvik’s goalkeeper Sandra Toft who played wearing a protective helmet.

Fleury Loiret booked their first points in the Champions League main round –rightfully so.  On the defensive end Larvik was lacking urgency and on the other side of the pitch, the team squandered too many of their wide-open chances.  Fleury’s road win has blown the race for a quarter-final berth in Group 1 wide open.  While FTC appears to be secure, Larvik, Baia Mare and Fleury will have to fight until the very end to enter the tournament’s first elimination round.

From the beginning, Fleury’s head coach, Frederic Bougeant, had decided to play with two lineplayers (Eli Chavez and Laura Kamdop), a move that would pay dividends in the early part of the game. Larvik’s defense was struggling to contain the duo Kamdop / Chavez while the French back-court was clicking on all cylinders.  Even though Thea Mork, Marit Malm Frafjord and Amanda Kurtovic had missed a number of open shots, by the 25th minute of the game, Anja Hammerseng-Edin had scored and Larvik was leading for the first time in the match (12:11).  But sloppy ball handling and lack of concentration allowed another reversal of fortune, right before the half-time buzzer.

After the break, the 2,137 spectators at Larvik’s “Bolligmappa” arena saw the home team quickly falling behind once again.  But this time, they would not see a recovery.  Larvik trailed Fleury consistently through the second half of the game.  Only Nora Mork reached her potential, scoring 12 goals, with one of them qualifying for the number one spot in the EHF’s “Top Five Goals of the Round”.  Although, Tine Stange saw extended minutes on the field, she could not apply the necessary pressure and neither could Kristine Breistol or Anja Hammerseng-Edin.  Add a quite day for Amanda Kurtovic and you’ll get the picture.  Sandra Toft played her first Champions League minutes in 2016 but she could not make a difference – not today.

Fleury in contrast enjoyed full contributions from their strong back-court players “Sandy” Barbosa (9 goals), Gnonsiane Niombla (6 goals) and Audrey Bruneau (4).  And in case a shot did come through Fleury’s defense, there still was a superb performing Darly Zoqbi de Paula in goal.

Darly Zoqbi de Paula had an outstanding day between the goalposts with a savings rate of 43%.  It does not get that much better.  She was on point, especially in the few moments when Larvik threatened to get closer.

Move of the Match

Coach Bougeant’s decision to open the game with two line players proved to be successful and caught Larvik’s defense off balance.  Surprisingly, Fleury did not apply this winning formula after the first ten minutes of the game.  Maybe too much of a “double-duty” for Kamdop and Chavez, who played in central defense throughout the match?

21% – the savings rate for Larvik’s goalkeeping duo was too low and will not allow a serious run at the Champions League quarter-final.  With Sandra Toft back in action, coach Moen has options again – much needed options.

Frederic Bougeant had much to do with his team’s – unexpected – victory in Larvik.  His tactical move to play with two line-players early on, paved the way to a Fleury lead.  Sticking to a “short” rotation off the bench was not without risk either but on this Saturday in Larvik it worked.  Chapeau – Monsieur Bougeant.

With six morepoints to play for, Fleury has three very tough assignments in front of them while the tasks look somewhat easier – at least on paper – for Larvik and Baia Mare, assuming that Thueringer HC will not seriously compete for a quarter-final spot after their 30:24 (15:7) loss against Rostov-Don, anymore.  Still, Larvik will have to step up their game considerably when visiting Germany next weekend.  One more stumble could be fateful.

In match of the week in Group 1, Fleury welcomes a red-hot Allison Pineau and the team from Baia Mare, in Orleans.  Yet another “must-win” game for Frederic Bougeant & Co to keep the Champions League dream alive.