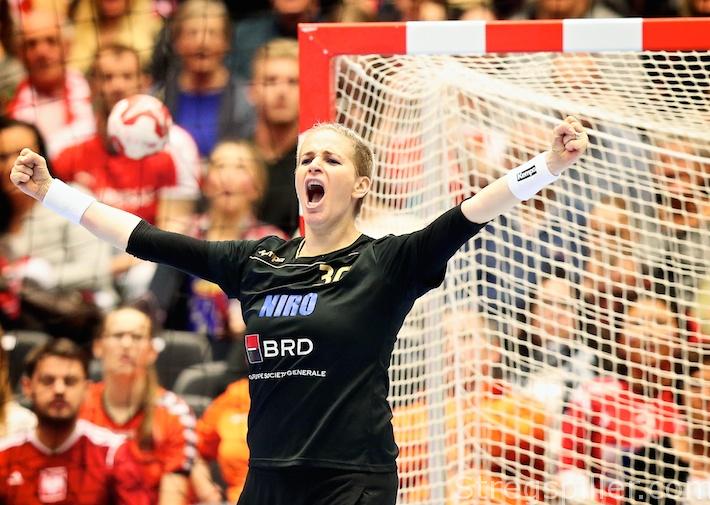 Both teams knew that the winner of this match would have significant better chances for a quarter-final berth than the loser.  This plain and simple truth became increasingly apparent as the game progressed. The players were on the field but their mind seemed to be elsewhere.  The affair was anything but a good game of handball – too much was at stake.

For starters, it was the lowest scoring match of the Champions League campaign to date, including the two qualification tournaments.  Knowing that a loss would effectively terminate either squad’s quarter-final dream, placed a very heavy burden on the two teams.  That Allison Pineau would decide the game in favor of Baia Mare came at no surprise.  Who else but the best and most complete player of the 2015/16 Champions League season should have done it?  For the record it should be said that Allison’s performance until the 58th minute was a far cry of her previous accomplishments.

In contrast to Baia Mare, Fleury had a decent start to the game that abruptly ended around the 15th minute. Thereafter, the visitors from Romania slowly began clawing back and right before the break, Lois Abbingh scored the equalizer at 8:8.  The term “underwhelming” came to mind when reviewing the half time stats. Both teams were dead even, scoring at a rate of 35%, whereas the goalkeepers on either side stood out in a positive way.  Darly Paula de Zoqbi savings percentage read 50, while Paula Ungureanu was not too far behind at 46%.  Turnovers and technical fouls reflected the hectic and unconcentrated efforts of the players on either side.

Manon Houette was the name of the game.  Aside from Paula de Zoqbi’s goalkeeping artistry, Fleury’s left-winger carried her teammates almost single-handedly through the second half.  But, her best Champions League performance of the season – she scored seven goals – was not enough to defeat Baia Mare in the end.  One minute before regulation time, Allison Pineau took center-stage; first scoring the equalizer and with three seconds on the clock, she sent a shot from the 10-meter mark past Fleury’s keeper.  Game over.

The two goalkeepers – Darly Paula de Zoqbi and Paula Ungureanu – need to be mentioned in this category. While de Zoqbi recorded the higher savings rate (48%), Ungureanu deflected Fleury’s last shot and set the stage for the dramatic ending.  Aside from Ungureanu, Lois Abbingh and Katarina Jezic were the only other players of Baia Mare that truly “showed up” for the game.

It all should have ended in a tie – at least that’s what the statistic chart suggested.  Both clubs scored at 40%, turned the ball over 13 times and recorded four suspension minutes each.  As is known by now, the draw only stood for 59 minutes and 57 seconds before Allison Pineau showed up late but still on time.

After the thrilling victory in Orleans, Baia Mare is holding all the cards in their hands, including a joker that may be pulled in the last match of the main round when do Nascimento & Co meet FTC Rail Cargo, in Budapest.  This Sunday, the crew of coach Aurelian Rosca did not play their best game of handball but they took a major step towards the quarter-final.  In the end, it’s all that counts.

Fleury’s prospects have diminished but the round of last-eight is still within reach – at least in theory.  Next stop: Rostov Don.