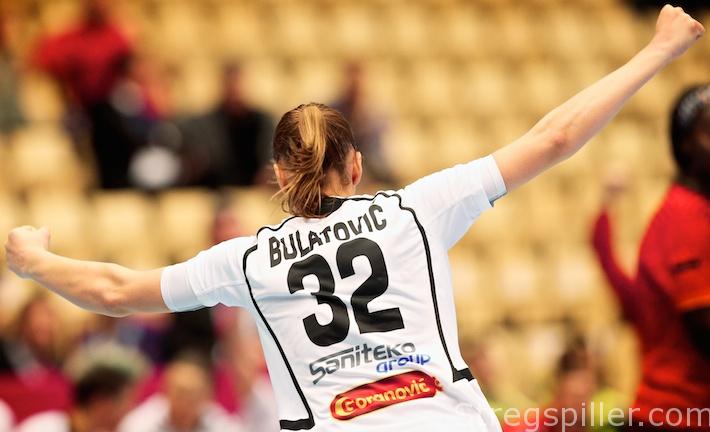 The last match day in Group 2 of the Women´s Champions League main round brought no changes to the standings. Buducnost kept first place with a decisive win against FC Midtjylland, while Gyor overcame a troublesome second half in Bucharest, defeating CSM.

CSM were sure to finish fourth in Group 2 no matter what, therefore the Romanian side had nothing at stake.  Gyor, in contrast, needed a victory in order to take second place back from Vardar, and possibly win Group 2 in case the unthinkable should happen – Buducnost stumbling against FC Midtjylland.

After being completely dominant in the first half, surprisingly Gyor got into trouble after the break, when CSM managed to reduce the deficit to just one goal a couple of times.  In the end, the Hungarians saved the win and secured second place in the group.

It was fact that Gyor had more at stake and coach Martin’s squad was dominating from the start, leading 4:1, 6:2 and 8:3.  A timeout called by CSM’s coach Kim Rasmussen, 12 minutes into the game – his team was down by four goals (2:6) – did not help at all.  Instead, Gyor increased to 13:6 and were still up by seven at half time.  Actually, the orchestra, that entertained the 4,000 spectators, playing the Radetzky March during the break, performed so much better than the home team did, in the first half.

Maybe it was the tune of the orchestra that inspired CSM.  Or maybe it was the fact that injury strapped Gyor (only 12 players were registered on the team sheet) became short on resources – in any event, the hosts began narrowing the gap from the start of the second half, and with 12 minutes remaining, Carmen Martin reduce the deficit to only one goal for the first time, at 18:19.

Unscathed, Gyor went ahead by three goals, but with three minutes left on the clock, Bucuresti’s lineplayer Oana Manea cut Gyor’s lead to one goal again (21:22). However, when Ida Alstad increased the tally to 23:21 for the visitors, scoring on a 7-meter penalty, less than a minute later, the ultimate decision was near. Nycke Groot’s shot made it 24:21 and any remaining doubt about the result was eliminated.

An all Hungarian quarter-final against FTC-Rail Cargo Hungaria will be next for the team of Ambros Martin.  And CSM’s Danish coach Kim Rasmussen will be a meeting his countryman – Jan Leslie – and the unbeaten club of Rostov Don.

After Gyor’s win in Bucharest earlier in the afternoon, Buducnost knew what needed to be done.  A victory was a “must” in order to win the group and get the “easiest” of all possible opponents in the quarter-final.  To Midtjylland, nothing was at stake anymore after the Danish champions lost their hope for a quarter-final berth a week ago already.

Just as expected, Buducnost had no problems defeating the Danish champions and take the group win. Had Buducnost coach Dragan Adzic not given a chance to his young substitute players in the latter part of the second half, the game could have turned into a real humiliating experience for Midtjylland.  Instead, a half empty Moraca hall saw the Danes getting away with a six-goal defeat.

It took Buducnost some time to get their game working.  At the beginning, it was hard to see how much was at stake for the home team.  Eventually, the Montenegrins improved their concentration and after Buducnost went from 7:6 to 12:6, coach Adzic’s team was in complete control.  Whatever Midtjylland’s coach, Helle Thomsen tried nothing could prevent Buduconost from taking a clear 14:7 lead into half time.

The first part of the last 30 minutes was simply embarrassing for the visitors, as Buducnost increased their advantage to 14 goals (23:9) and maintaining it.  At that point, Midtjylland were heading for their biggest Champions League loss ever.

However, Dragan Adzic had mercy with his opponent.  Or, more likely, he wanted to provide some playing time to his young substitutes who usually do not see the court that often. The move allowed the guests to reduce the deficit.  In all respect to Midtjylland, their players never gave up, took the gifts they were offered and managed to cut the margin of difference to six goals before the final buzzer.

For FC Midtjylland, there is no “next” in the Champions League this season, whereas Buducnost’s, coming task will be the quarter-final against Romanian HCM Baia Mare, in April.  More importantly, Katarina Bulatovic & Co. will play the final leg at home.  The other quarter-finals are: