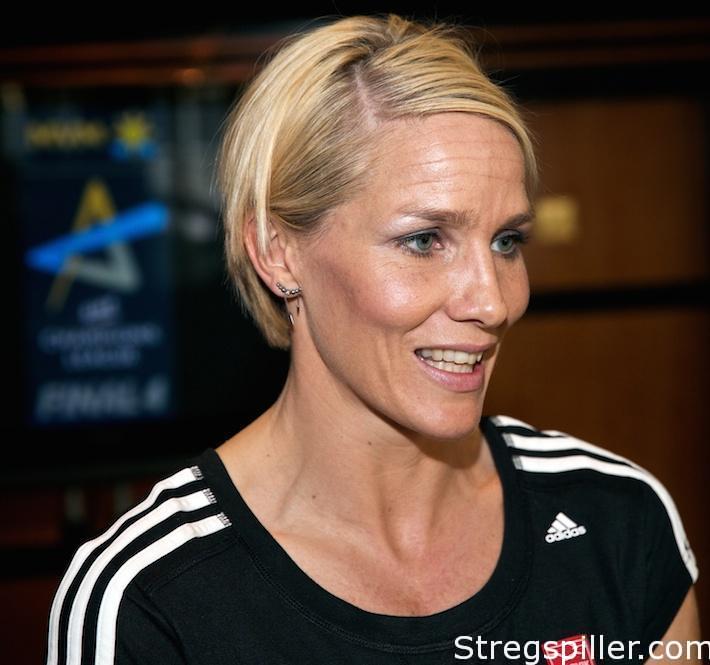 Larvik needed a win against Fleury Loiret, in game number 1,000 in the club’s history, to claim second place in Group 1 – plain and simple.  In doing so, the Norwegians were not able to rely on the help of veteran playmaker Gro Hammerseng-Edin and left-wing Thea Mork.  On the positive side – Amanda Kurtovic was back on deck.  Whereas, the team of headcoach Frederic Bougeant was aiming to close out their maiden voyage to the Champions League in style, in front of their home crowd.

The top team from Norway’s southern coast jumped to a quick four-goal lead (6th minute) before Fleury entered the contest in earnest.  The slow and steady climb of the French champion was rewarded with a narrow half-time lead.  During the second half neither club was able to pull away decisively and it took until the very last minutes of the match before the goals of Amanda Kurtovic (1) and Tine Stange (2) sealed the deal.

From the get go it looked like Larvik would run all over Fleury and decide the game in the opening half already.  But after a sleepy start, the French champion regained composure and fought back.  Laura Kamdop had some impressive scores from the line and Fleury’s back-court stars – Gnonsiane Niombla and Alexandrine Barbosa – found their range from nine-meters.  By minute 18, the French had drawn even for the first time and coach Tor Odvar Moen saw the need to talk it over in his first timeout.  But to no avail – Eli Chavez and Audrey Bruneau continued where Kamdop and Barbosa left off.  Larvik had gone cold and only because of two timely scores from Anja Hammerseng-Edin and Marit Malm Frafjord in the 30th minute, did the Norwegian’s stay close.  At 16:15, the teams changed sides.

Both clubs began the second half with new goalkeepers.  Julie Foggea replaced Darly Paula de Zoqbi, while Danish international, Sandra Toft was now tending Larvik’s goal instead of Alma Grisovic.  Amanda Kurtovic was now occupying Larvik’s right-wing and three minutes later she had scored her first goal of the match at 17:17.  From then on both teams kept tracking each other closely and neither Fleury nor Larvik were able to pull away decisively.  Three minutes before the end, Kurtovic and two goals from Tine Stange – who had another outstanding performance – secured Larvik’s much celebrated victory.

It came late but not too late for Larvik.  Three minutes before the final whistle, coach Bougeant decided to play with seven field players – a tactical move that did not play out as intended.  Fleury turned over the ball and Amanda Kurtovic had no problems beating Julie Foggea who was rushing back to goal.  Larvik was leading by two with less than two minutes to play.

Nora Mork and Tine Stange combined for 18 of Larvik’s 31 goals.  Following the splendid presentation against FTC Rail Cargo one week ago, when they scored 10 and 9 goals respectively, the Norwegian back-court duo added another brilliant performance on an important day for Larvik’s record book.

ZRK Vardar will be the opponent of Larvik on the first weekend in April, when coach Moen’s crew will visit the Macedonian capital.  Can Vardar make it “three-in-a-row” or will the Norwegian handball powerhouse make a repeat trip to the Final4 tournament at Laszlo Papp arena, on May 7, in Budapest?

Coach Mueller’s team was able to hang with the Russian champion for most of the game and only succumbed in the last ten minutes.  Yet another remarkable performance of the German crew, that played their last Champions League match of the season in front of 1,700 loyal spectators.

“It was a fantastic and fast paced Champions League match.  We are lucky to beat Thueringer HC.  Until the very end, the game could have gone either way.  We had to give it all and could not rest but in the second half we took a deserved victory because of great defensive work.“

Thueringer HC will now focus on the German Championship while Rostov’s coach Jan Leslie will look to beat his compatriot, Kim Rasmussen when their two teams meet in the Champions League quarter-finals.