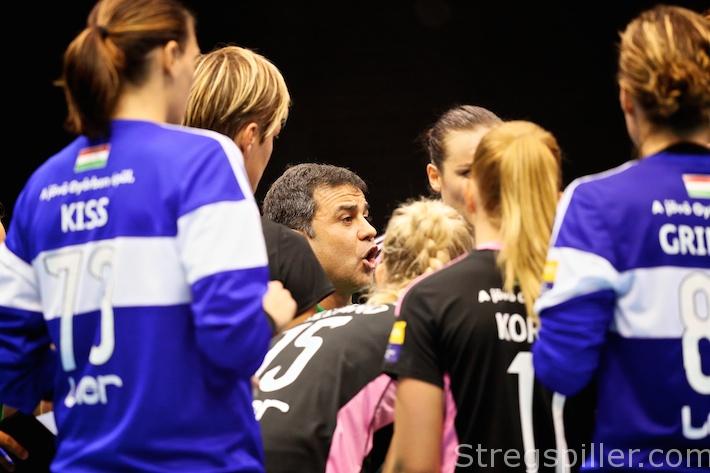 Do-or-die!  Crunch time!  Survival of the fittest!   The 2015/16 edition of the women’s Champions League has reached its first elimination round – the quarter-finals.  Eight teams are left and over the course of the next nine days, for four of the clubs, the door to the FINAL4 tournament in Budapest will close for good.  At this point, many questions remain open before final answers will be “hand-delivered” on the courts of Skopje, Larvik, Budapest, Gyor, Baia Mare, Podgorica, Rostov-Don and Bucuresti.

Will Rostov-Don recover from their first Champions League loss to date against CSM Bucuresti this past Thursday?

Who will be Hungary’s representative on May 7 and 8, when the best four women handball teams meet in Budapest, to determine the ultimate winner of Europe’s premier club competition?

After two failed attempts in 2014 and 2015, can Vardar Skopje go all the way this time around or will Gro Hammerseng-Edin and Co. book a repeat trip to the “Pearl of the Danube”?

Last but not least – who will stop the handball giants from Podgorica?  Can Baia Mare derail the squad of Dragan Adzic en route to another Champions League triumph?  Two fantastic matches await the fans in Baia Mare and Podgorica and most of the experts expect Allison Pineau, Lois Abbingh & Co. not to stand a chance against the defending champions.  Coach Adzic will have his best team on deck with the exception of Suzana Lazovic and a question mark behind Djurdjina Jaukovic.

Undoubtedly, one of the most anticipated – if not THE most expected battle – of the three women’s Champions League quarter-final games this weekend, is the clash between the reigning Hungarian champion, FTC Rail Cargo and the handball stars from Gyor.  Following a seven year title drought, FTC’s head coach Gabor Elek finally steered his team to a long-overdue domestic championship in 2015.  The previous success dated as far back as 2007.

On paper, Gyor looks intimidating, even when considering the many injuries that the club had to cope with up to this point.  Coach Martin’s team has reached the round of “last-eight” without the likes of Zsusanna Tomori, Anita Gorbicz, Bernadett Bognar-Bodi and Szimonetta Planetta – just to name the most prominent casualties.  Having done so, says a lot about the depth of the team as well as financial wherewithal.  When Tomori and Gorbicz returned injured from the 2015 World Cup in Denmark, Gyor reacted quickly, borrowing the helping hands of Ida Alstad (Byasen Trondheim), to close the gap that the two superstars had left in Gyor’s lineup.

Back in September of last year, on the outset of Gyor’s Champions League qualification tournament in Drammen (Norway), Ambros Martin summarized the disappointing 2014/15 season in no uncertain terms: “What ruined our season was the defeat against Vardar.  This disappointment meant that we also lost the Hungarian championship.”

This was then – now Gyor is looking to repeat the victory of last weekend, when Heidi Loke & Co. had no problems beating FTC at home 33:22.  The regular season encounter between the two Hungarian handball powerhouses was effectively decided after 30 minutes.  At that time, Gyor had taken a commanding 17:10 lead.  Martin and his crew know that it won’t be that easy again when the clubs meet on Saturday, playing the first leg of two quarter-final games at the OBO arena in Budapest.   Here is how the two teams shape up, ahead of what can be expected an epic fight between the two best women teams of Hungarian handball, in recent history.

Although Melinda Szikora has been playing an excellent season, Gyor’s Norwegian World Champion, Kari Grimsbo has the edge; especially in “must-win” games.  If all goes well, don’t expect meaningful minutes for Kiss or Tomasevic.

On a good day FTC’s backcourt will shoot the lights out – simply put.  Of FTC’s 282 main round goals, the combined score of the three players accounted for 118 of them or 42%.  Much of FTC’s success will rest on Nerea Pena’s shoulders.  The Spanish playmaker can easily decide a game on her own if left unattended for prolonged periods of time.

Amorim’s, Groot’s and Sulland’s contribution to their team’s goal tally doesn’t rank far behind.  They scored 106 of Gyor’s 252 main round goals (42%) but unlike FTC, Gyor’s overall performance relies less on the shooting abilities of their backcourt trio.

Advantage Gyor – without the shadow of a doubt.  Having the best line player in the world on their team helps Gyor’s case.  Heidi Loke can and most likely will make the difference once again, as she has done so many times before.  So far she is Gyor’s top scorer (44 goals) in the 2015/16 Champions League season and “go-to” player comes crunch time.  While Szamoransky is on her way, eclipsing her 2012/13 Champions League record of 37 goals – currently 33 – it’s fair to state that she will not have the same impact as the 2015 World Champion from Norway.  FTC’s Anita Cifra will not see much time on the floor unlike Yvette Broch.  The Dutch silver medal winner of World Cup ’15 will play a key role in Gyor’s central defense and counter attacks.

Young Nadine Schatzl and veteran right-wing M. Kovacsicz are FTC mainstays and coach Elek won’t rotate either player for extended periods of the game.  Schatzl (28 goals) is playing a particular good Champions League season, especially when considering the fact that FTC’s backcourt players typically don’t keep an eye on their wings with the notable exception of Nerea Pena.

With the arrival of Nycke Groot, Gyor’s Aniko Kovacsics has been spending most of her time on the left wing once again.  Following an exceptional 2014/15 season as playmaker, replacing Anita Gorbicz, Kovacsics will leave Gyor and join FTC in the summer.  For now, she will be one of coach Martin’s most important players in the match against the club from Hungary’s capital.  Don’t look beyond Kovascics – Gyor’s alternatives are limited given the injury of Dorina Korsos.  On the opposite side, Jana Knedlikova has been assuming the duties of Adrien Orban (back in Gyor’s lineup after a long recovery) and Bognar-Bodi (still injured).  Given her versatility and experience, Aniko Kovascics can be one of the players making the difference in the two quarter final games.

Four of the best defenders in women’s handball will try hard to limit the effectiveness of their opponents.  In contrast to Gyor, FTC’s two central defenders are true specialists, playing on one side of the court only.  While Gyor rotates Broch for Sulland, FTC typically changes both central defenders, slowing down the rhythm of the match.  Fast-breaks will be the one element of the game that fans won’t see much of when the two squads meet.  Expect Yvette Broch’s broader skill set to work for the benefit of Gyor.

Most recently Gabor Elek (FTC) and Ambros Martin (Gyor) haven been sharing duties as coaches of Hungary’s national team.  They will hardly surprise each other with unexpected tactical moves but Martin may deal with the “heat in the kitchen” a bit better.