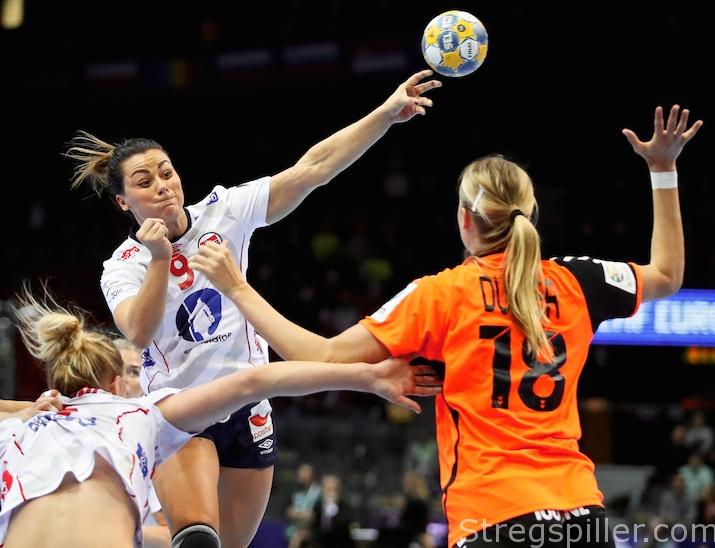 Norway has all the fun – again

The Netherlands´s Estavana Polman claimed that Dutch girls have more fun, but it was Norway who had the last laugh, winning the final match of EURO 2016 – 30:29.

Norway had reached the final as the only unbeaten team with seven straight victories, while the Netherlands had won every match after their defeat in the preliminary round against Germany.

It was the second time within the past 12 months that the two nations met in the last game of a championship.

In the first ever final for the Netherlands, at the 2015 World Championship in Denmark, Norway ran over the Dutch girls, winning 31:23, after leading 20:9 at half time.

The general opinion was that the Netherlands would do considerably better this time.

“We are faster. We are smarter, and we have more fun!” claimed Dutch star Estavana Polman before closing day of EURO 2016.

Yet, no team was faster – the game was played at an extremely high pace but the Norwegians were just a bit smarter, and in the end, they had the last laugh.

The start was breathtaking.  Both teams began the match at a very high pace and the Dutch offense had no problems against Norway´s feared defense, but the same had to be said about Norway’s attack as well.

After 12 minutes, the Netherlands had already scored as many goals as in the entire first half of the World Championship final a year ago – nine.

The Netherlands was the better team during this period, leading 9:6 and 13:9.

Despite the advantage, coach Helle Thomsen started attacking seven-against-six after 17 minutes, when her team was leading 10:8.

However, this weapon was not nearly as successful as in the semi-final against Denmark.  Norway’s defense did not have any particular problems with the extra Dutch player, and it also helped that Kari Alvik Grimsbø had replaced Silje Solberg in goal, after 20 minutes.

Solberg was far from being the miracle woman she was in the semi-final against France, and Grimsbo was a real improvement between the goalposts, playing an important part in Norway´s comeback.

By the time the Dutch were leading 13:9, Norway scored five goals in a row and cut the score to one goal  before drawing even right at the half time buzzer.

It started just as the first half had ended.

But, soon Norway got the upper hand  And when Nora Mørk increased to 24:20, the crew of coach Hergeirsson appeared to be all set to decide the match early on.  At 28:23, the game seemed to be over for the Dutch.

With seven minutes left on the game clock, however, Helle Thomsen went back to playing seven-against-six, and this time the tactical move worked.

Her team was inching closer again, and with a minute and 52 seconds left, Estavana Polman reduced the score to 30:29.

Tess Wester saved a shot from Stine Bredal Oftedal, but at the other end of the court, Polman was denied by Grimsbø.

Still, the Netherlands managed to get possession of the ball again, while receiving a free-throw with four seconds left.  But, Danick Snelder sent the ball on Nycke Groot´s foot, and Norway could celebrate.

One player needs to be mentioned in this category. Kari Alvik Grimsbø entered the game for Norway after 20 minutes, and made her presence known right away, stopping the Dutch momentum, and allowing her team to catch up with a four-goal lead.

“Is the best player always the player who scores most goals?” – Norway´s Icelandic coach Thorir Hergeirsson recently asked during a press conference in Helsingborg.

No, not always, but Nora Mørk´s 12 goals simply cannot be ignored in this context and without the help of the dangerous right-back, Norway would not have come near the trophy tonight.

Norway did it again, but it’s getting a bit more crowded at the top in women´s handball.

The Norwegians had to fight and work hard in the semi-final against France already and they had to do so again in the last game of the competition.  Thorir Hergeirsson will have to get on his toes to stay ahead, as new tactical measures are challenging the status quo.

The Dutch girls obviously do not have fun right now, but they can take comfort in the fact they put up a much better fight this time around.  Helle Thomsen and her women can be proud and it may be just a matter of time before “Team Oranje” will lift a major trophy.