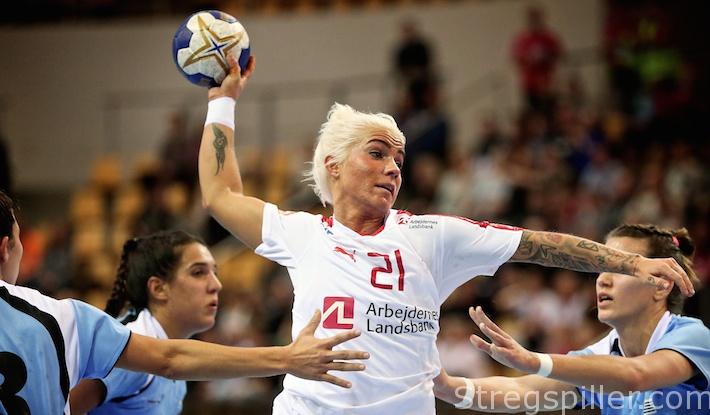 A draw and a win to finish Olympic qualifiers in Aarhus

Romania and Montenegro drew 23:23 after the Romanians had dominated most of the match, while Denmark defeated Uruguay by 21 goals, as the Olympic qualification group in Aarhus ended on Sunday in front of 1,533 spectators.

Both teams already clinched their Olympic berth on Saturday, so the match was of no real significance anymore.  But of course, such circumstances should never rule out the chance of an interesting game.

An unimportant game with low intensity suddenly became fierce towards the end, as Montenegro came back from a deficit to get a draw.  Romania´s coach Tomas Ryde had “robbed” his team of the victory by calling a timeout with two seconds left on the clock, just as one of his players was firing a goal-scoring shot.  Both coaches allotted their substitutes plenty of time on the pitch – Montenegro’s back court player, Jelena Despotovic, benefited from it in particular, scoring eight goals on 11 attempts.

The two teams took the opportunity to rest most of their key players and in the first half hour, Romania seemed to be more interested in winning the game.  Personally, I have never seen Dragan Adzic so relaxed, when his team was seven goals down, as he was this Sunday in Aarhus.  The very first timeout of the match was called by Romania´s coach, Tomas Ryde – at the time his team was leading 8:4.
After Montenegro had been up 2:0 and 3:1, Romania took over completely, scoring seven goals in a row, while getting ahead 8:3. They never gave back the lead; instead they increased the score to seven goals at 14:7.  The four-goal difference at half time did not properly reflect development of the game.

The substitutes´ parade continued while the biggest stars of both teams – Cristina Neagu (Romania) and Katarina Bulatovic (Montenegro) – remained on the bench for the entire match.  The slow pace of the match continued, as Romania held on to a distinct lead.  However, intensity grew, as Montenegro suddenly began cutting the deficit – especially, once they equalized at 22:22 with three minutes and 34 seconds left, while playing four against six.
The match was heading for a dramatic end, as Romania´s Swedish coach Tomas Ryde called a timeout with two to go – while a shot from one of his players was on its way crossing the goal line – the score would have decided the match.  Instead, Romania had to make do with a free-throw after time had run out, which missed the target.  Thank goodness, the result did not decide Olympic qualification.

Romania and Montenegro can both start preparing for the Olympic games in Rio and so can Russia, Sweden, Netherlands and France who qualified in the other two European qualification groups that were played over the weekend.

Much to the disappointment of their fans – and themselves, of course – the Danes had lost their chance to qualify for Rio 2016 before this last match day.  All the hosts could hope for was to restore a bit of honor with a decent size victory against Uruguay. The South Americans, for their part, were obviously interested in offering as much resistance as possible.

From the start the Danes wanted to leave their supporters with a better impression.  It war particularly obvious when playing defense, where the Uruguayans did not get the same opportunities as they did in the games against Romania and Montenegro.  It took Uruguay until the 12th minute to score their first goal; at that point, Denmark was leading 6:0 already.
Uruguay tried to confuse their opponents with an even more aggressive defense formation than in the first two games in Aarhus, but the tactical move harmed Denmark’s attacking play only temporarily and at 11:1, the hosts had their first 10-goal advantage.  Before the break, the Danes extended their lead even further – to 12 goals.

Sandra Toft played the whole match in goal, while playmaker Kristina Kristiansen, who was hardly seen against Montenegro, also saw a lot of time on the court.  Apart from this, a relaxed Klavs Bruun Jørgensen, who remained seated during the entire match, made good use of his squad, as the Danes continued to play their Uruguayan defenders dizzy, extending their lead constantly.  In the end, a 21-goal differential, expressed the quality between the two teams quite well.

For Denmark: A thorough team evaluation will be scheduled soon.  But above all – on handball’s international stage, Denmark’s women team is only a mediocre contender at this particular moment.

For Uruguay: Go back and train harder, get more physical strength and try to improve on tactical cleverness.

Denmark´s greatest triumph in sport against Uruguay is a 6:1 victory at the 1986 Football World Championship in Mexico. It still is!