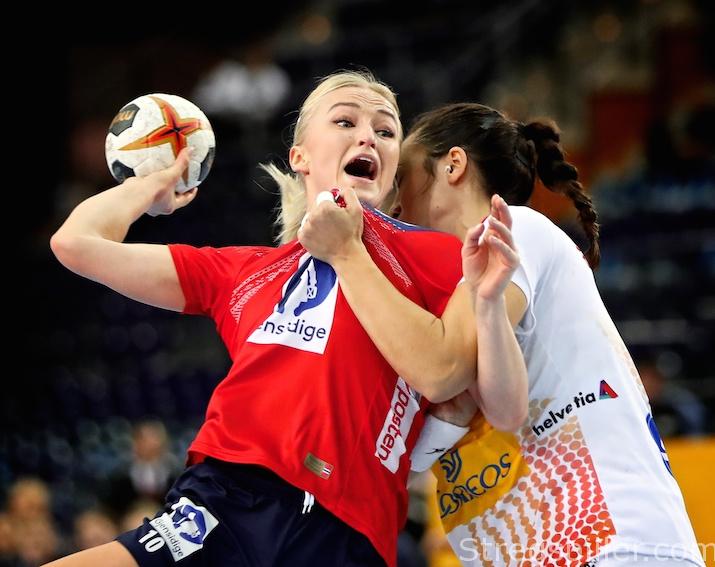 Stine Oftedal’s happiness showed right after beating Spain at the 2017 World Cup, in Leipzig. Norway reached the quarterfinal at “Simply Wunderbar” rather easily, thanks to an impressive 31-23 rout.  After the match, there was hardly anything to criticize – Norway once again showed why they are the team to beat.

Congratulations Stine, that was impressive. In the end it looked like you were running all over them, you crushed them!

SO: Yes, somehow we ended up doing that – kind of.  Of course during the game it felt like it was close, although I always felt like we had them under control. Still, it’s like you want to get more than those two or three goal of  leads.  That’s always the hard part, but I think we fought really well. We had a lot of energy today and we really wanted “it”. Then it ends up like it did.

SO: Yes, maybe – it’s also hard when you are behind the whole match and you are trying to catch up with the opponent all the time.  At some point we were able to finish Spain.

Did you feel at any point that you could lose the match?

SO: Today,  I really felt like we were going to win – we were the better team.  I was quite nervous before the match, of course, but then it disappeared.

Up next is Russia, a team that won the Olympics last year, but didn’t totally convince in the competition, so far. What do you think will be necessary to beat them?

SO: When it comes to Russia it’s definitely a team of the other favorites to win the tournament.  It will be a tougher game for sure. But I think if we fight like we did today and can get rid of some of the technical mistakes, we will win that one as well.