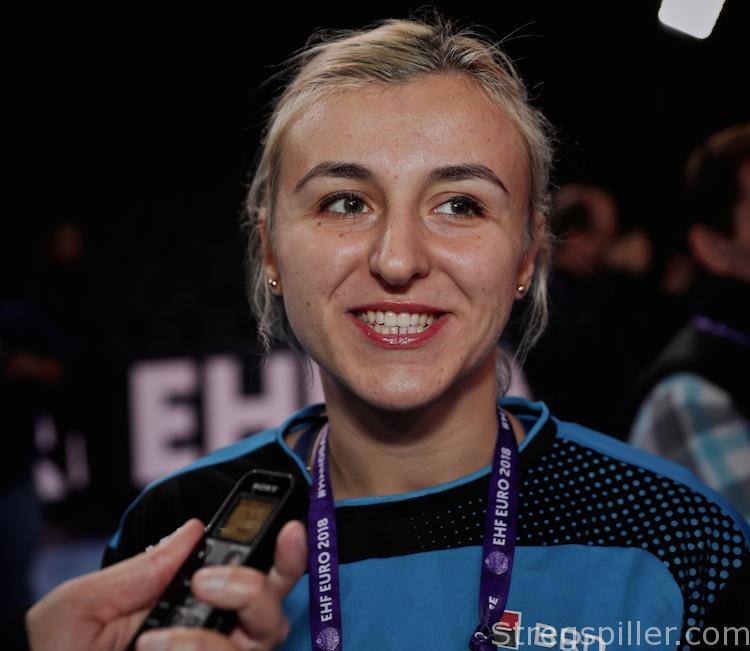 INTERVIEW – Despite the disappointment of losing the semi-final to Russia, the young Romanian keeper, Yuliya Dumanska is happy and content with her first European championship.

One of her dreams for the future:  Play for a Champions League club, she reveals to stregspiller.com on Media Day at the ongoing EHF European championship, in France.

“Yuliya who?  Has she even been at a major championship?”

This was a comment on Twitter, when an expert mentioned the name Yuliya Dumanska as a player to watch out for, before the 2018 European championship.

The simple answer to the aforementioned question is that the 22-year-old Romanian goalkeeper had not taken part in a senior championship before this tournament, but by now it’s fair to assume that just about everyone who is interested in women´s handball knows who Yuliya Dumanska is!

With a saving percentage of 34, the shot-stopper from SCM Valcea has definitely left her mark and she has played a significant role in Romania reaching the semi-final.

“Playing my first major championship has been a great experience. I can already feel that I have developed a lot; this aside, I am really happy to get the chance to play for Romania at this level.

“On behalf of my team, I am satisfied, of course.  We are among the first four teams in the competition.   Now, we want to play another 60 minutes of good handball, in what will undoubtedly be a difficult game against Holland and take the bronze medal.

We would like to finish this tournament with our heads up and on a positive note,” Yuliya Dumanska tells stregspiller.com.

She is a bit reluctant to speak about her own, very personal, success in the ongoing competition.

“I am satisfied when I can help my team and that’s what I try to do.

“The girls in our defense are helping me a lot. With a defense formation like ours, you really have good working conditions as a goalkeeper.

“I hope we can defend just as well in the game on Sunday – without our strong defense, I am nothing and cannot do much,” she says.

Romania have not won a medal at a major, senior, championship ever since taking bronze at the European championship, back in 2010.  Therefore, achieving third place would be a great accomplishment for Dumanska and her teammates, especially after the injury of star player, Cristina Neagu.

“Of course, this pushes us even more to take third place. It’s our dream and it would reward the work and the time we have invested in preparing for this championship.

“We are very motivated and ready for the game, on Sunday,” says the young goalkeeper who admits that it took some time to digest the 28:22 defeat in the first semi-final against Russia, this past Friday.

“Of course, the loss was a hard one to take. We tried to put them (Russia ed.) in difficult situations, but they were better than us, on that day.  We have to forget about this match.

“Simply put, we must look forward and enjoy our last game here in France” she finds.

She realizes that the bronze match against a Dutch team that has been in several “do-or-die” of matches over the past few years, will be a tough challenge.

“For instance, they played for third place last year at the World Championship; so obviously they are a very experienced team.

In addition, they have many excellent players, but so do we and I can assure you that we will fight until the very end,” says Yuliya Dumanska who really caught the eye of the international handball community at this tournament,  including European top clubs as well as agents. In the long term, Dumanska has high ambitions and a wish of playing in the Champions League.

“Of course, it’s my dream to play in the Champions League.

“Right now, I have a contract with my club in Romania – SCM Valcea, but I hope we can finish first or second in the domestic league and directly qualify for the Champions League, next season.

“I am ready to work for this dream every day,” says the talented keeper who is content with her current club.  Although, it sounds natural, if the powerhouse in Romanian women´s handball, CSM Bucuresti, might be interested in her, one day.

“That’s a big club for sure, but right now, I focus on my current club, Valcea, and the national team. We will see what the future will hold.

“If I stay healthy, I will get offers from some very good clubs – no doubt. And, then we will see which one I chose,” says a smiling Yuliya Dumanska.