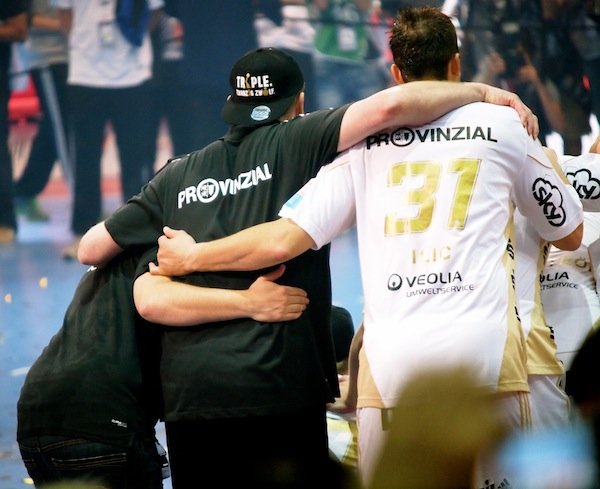 Nobody less than Alfred Gislason, coach of THW Kiel thinks that a handball World League could put the struggling teams in Europe and elsewhere on financial sound footing. If – and it’s a big “IF” – such format would raise audience awareness on a global scale while attracting better TV coverage and global sponsors. This and more he shared in a recent interview with the German magazine Der Spiegel.

The principle idea is correct. There is no reason why handball should not command increased media attention and take a bigger share of sponsor funding. It’s a fast and high scoring game with athletes that truly fit the bill. So why not try creating the “Formula 1” of handball or at least the equivalent of the North American NBA – let’s say the “NHA” (National Handball Association) of Europe? All financial problems would be solved with one stroke.

Unfortunately, it’s not that easy. Even in Formula 1 and the NBA one can find underfunded teams that teeter on the verge of insolvency. True – both sport series attract international sponsors and (TV)-audiences but the money is not shared equally. Take the racing circus of Formula 1 – there are some clear winners (Ferrari etc) but an even longer and ever changing list of losers (Sauber, Williams etc). Global media presence and sponsoring does not automatically translate into profits for every team. Why should it be any different for the sport of handball?

Handball needs a better approach a more transparent and equitable sharing of the money that might be generated. The current structure of the NBA could serve as a useful template with its thirty teams that are divided into two conferences of three divisions with five teams each.

Why not create a Northern and Southern Conference in Europe (possibly including some of the North African clubs) with respective divisions? All it requires is some creative thinking, a will to change the status quo and a leap of faith from the clubs, national handball federations, the EHF and IHF. Asking for too much?

What do you think? Share your views and opinions.