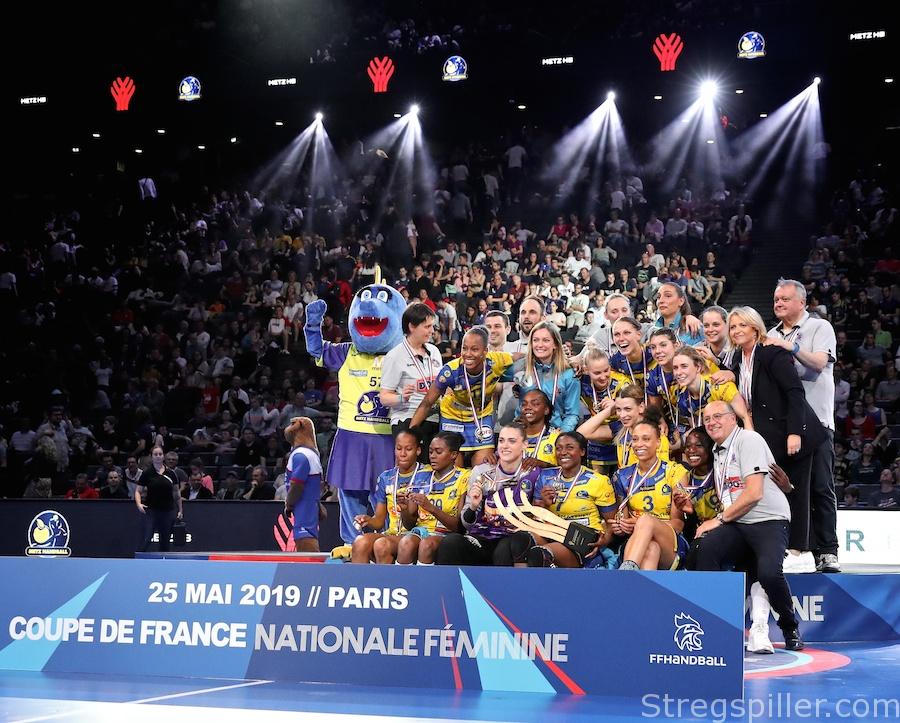 After winning the 2018/19 championship, Metz was aiming to perfect a historic season after the club’s first appearance at the EHF Champions League FINAL4, in Budapest, earlier in May.

Brest was returning to the Coupe de France as the reigning champion after a very difficult year, plagued by injuries and internal trouble.

Manon Houette (left wing, Metz) had to watch the final game of the season from the sidelines, while Brest was missing several key players, including national goalkeeper, Cleopatre Darleux, as well as the two playmakers, “Bella” Gullden and Allison Pinneau.

We hold the title and will defend our trophy. It’s the third time in four years that we have the pleasure to qualify for the final match; we know the road ahead as well as the difficulties to succeed in this great venue – Accor Hotels Arena.

The event is the great annual meeting in French handball. The entire “Handball Family” is represented: men and women, amateurs and professionals.

The Coupe de France is a major title and winning this trophy could be a fantastic end of a season that was exceptional for this club, any way you look at it.

From the beginning Metz left no doubt which team would leave Accor Hotels Arena as the winner, as they jumped to a six goal lead (13th minute).  Despite missing key players (see above), Brest fought back and midway through the first half Alicia Toublanc brought her team within one goal (7:8).  With Xenia Smits (Metz) in foul trouble, (2×2 minutes), Brest’s run served as a wake-up call as Metz outscored last year’s winner 10:4 in the remaining minutes before half time.  At 18:11 the two teams changed sides.

Metz needed only three minutes to “finish” the match once they retuned to the pitch. Beatrice Edwige took matters in her own hands, scoring three unanswered goals, effectively putting the game out of reach (21:11) in the 33rd minute. Thereafter, the two teams traded goals all the way to the end, as Metz finished a historic season in style.

In a one-sided affair, Jovana Stoiljkovic and Pauletta Foppa (both Brest) stood out while Beatrice Edwige, Gnosniane Niombla and Meline Nocandy made sure that Metz would celebrate a record 9th win of the Coupe de France.

Approximately 14.500 were in attendance and created an electric atmosphere at Accor Hotels Arena. The official hashtag #VivezVibrezJouez summed it up well – excellent choice.

Beatrice Edwige (Metz) – full stop.  The French international led all scorers, shooting a game high eight goals. In her last match for Metz she made sure that she will be dearly missed on both ends of the court in the 2019/20 season.

Two weeks ago, we were in Budapest (at the Champions League FINAL4 ed.) and we left very sad after two losses. But, now we have won two titles – the French championship as well as the cup – and we can be really proud of our achievements.

We’ve played the best season in the history of the club and tonight we will celebrate and say “Good Bye” to the players that will leave Metz.

In central defense we’ll lose a very important and very good player (Beatrice Edwige ed.) and “Manu” (coach Mayonnade ed.) will have to find different solutions as we prepare for next season – everything else we’ll find out over the summer.

If we can repeat our 2018/19 accomplishments next season, I’d say – ‘Yes – thank you very much’.  And,  if we can go a step further in the Champions League that would be great as well, as we would like to return to the FINAL4.

It’s a historic season for Metz – we played very well throughout the year and before the game tonight, I told the girls that it will be very difficult to repeat the success next year if we win this match. From the outside it’s not always as easy as it looks, as every player likes to be on the court and that’s not always possible.

Tonight we played exactly as I wished – we ran a lot and played a strong defense.

Speaking of defense – we’ll lose a key player (Beatrice Edwige ed.) – she has been very important for us in the past three years and going forward we have to find another solution. Astride N’Gouan, for example, is a great pivot and she will have to spend more time in defense as well. Now that Beatrice Edwige will leave, we’ll come up with something different just as we did when Ana Gros left the club.