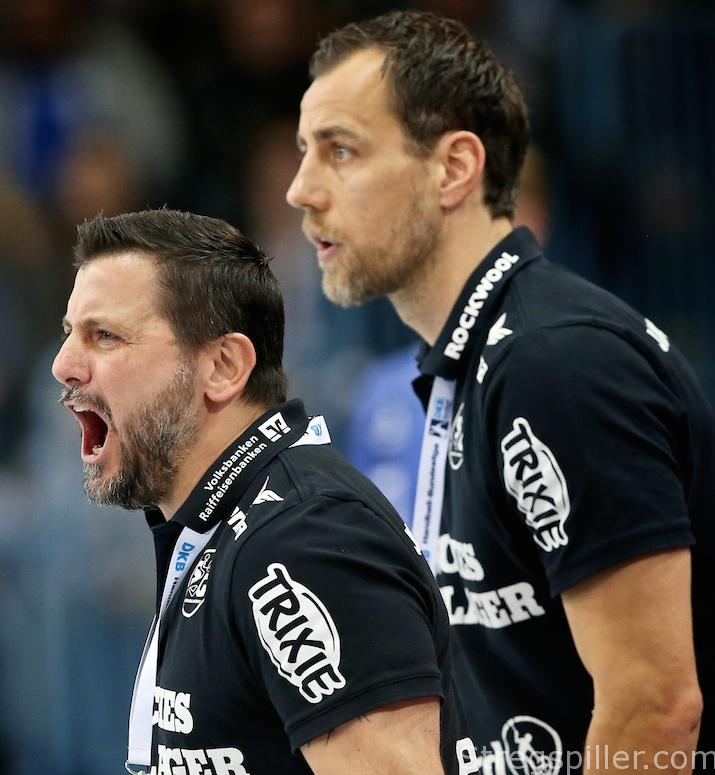 It was the move most people expected after Norway’s Christian Berge decided to stay put.  Still, the promotion of Ljubomir Vranjes’ current assistant, Maik Machulla, as Flensburg’s next head coach is a bold move.  But to me it’s the less risky one, although the former Bundesliga player will follow into the footsteps of the most successful as well as most charismatic coach in the club’s history.  Let’s have a look at what will change as of July 1st.

According to the new boss only a few things will be tweaked.  Machulla joked when he said during his introductory press conference: “I will change the language a little bit, because everything has a Scandinavian ring to it.  But that’s probably it.  We have a system that works quite well. There’s no need to change a lot.”  Obviously, general manager Dierk Schmäschke would prefer to continue the winning streak of the club.

As said before having signed Machulla is a gutsy decision, but nothing new for the club near the Danish boarder.  When Vranjes himself took over from Per Carlen in November 2010, he didn’t have any coaching experience at all.  Since then he has won two European cups, including the Champions League, and earned the honors of “World Coach of the Year”.  In contrast, Machulla has some experience, having coached second league teams such as HSG Nordhorn and ASV Hamm-Westfalen before joining Flensburg.

When I asked Jacob Heinl about the players having a say in the club’s decision, he said: “No, we weren’t ask what coach we would like to have.  Maybe the club knew that we like to work with Maik so we sort off influenced the outcome, but that’s it.”  I personally think the players did have more of a say than Heinl admits, because the right chemistry between a coach and his squad is probably the key to success, along with his tactical knowledge and the quality of his squad.

The club has seen that it can work quite well to promote an untested coaching talent.  Vranjes didn’t waste any time making sure that the players follow his lead.  This will be the most important element for Machulla if he wants to get anywhere close to the success that Vranjes enjoyed.  And he’s smart when he says that he will do only a few adjustments here and there, instead of putting a whole new philosophy in place.  If a team works as smooth as Flensburg does, there’s no need for it.

Something Machulla supports: “I like the fast and technical handball we’re playing.  I want to see the same kind of handball in the future.”  His only problem might be the high expectations around the clubhouse, because of everything goes as expected, the team will win the second league title in club history in early June.  As mentioned before, Vranjes succeeded in the Champions League and the German cup in the past, so officials and fans may see this trend going on forever.

Unlike Vranjes, though, Machulla is not a “big talker”.  The Swede with Bosnian roots loves to talk.  He’s as charismatic as they come. He lives handball 24/7 and he shows it.  He’s very active on social media and always available for the press.  Machulla has a different personality; just copying Vranjes wouldn’t reflect his character and therefore wouldn’t be authentic.  Or as Heinl put it: “Ljubo is very emotional, you can see Yugo style.”

Apparently you can – during a recent time-out in the Champions League when Flensburg played Kadetten Schaffhausen and he didn’t like when Anders Zachariassen interrupted him twice. Vranjes erupted like a volcano.  Machulla will do just fine focusing on his style and coaching abilities.

So, while the style of play will remain the same, the person in charge will be a bit different.  I like the choice – well done SG Flensburg-Handewitt.