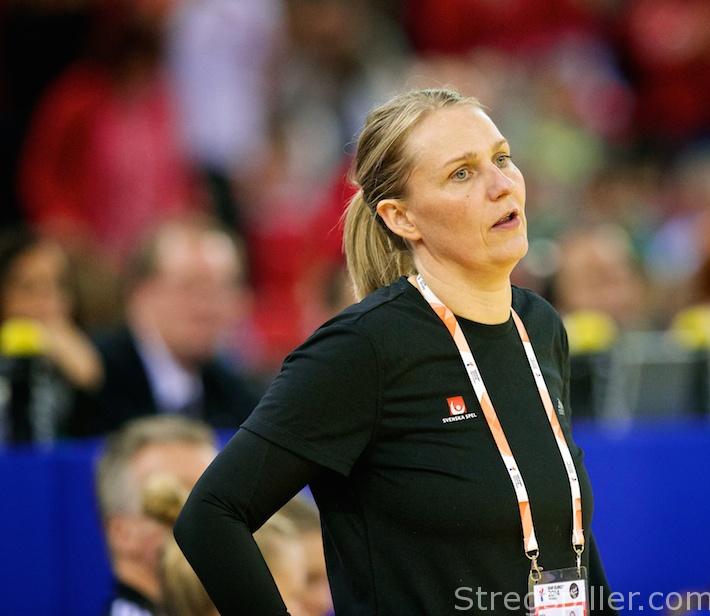 IK Savehof brings FC Midtjylland´s dream of a quarter-final berth one step closer to the end.

To Midtjylland a victory was a “must” in order to keep their hopes for the quarter-final alive, while a pointless Savehof played for honors only.

The first meeting between the two sides during the main round was won by Midtjylland (25:21), on January 10th, but Savehof’s coach Henrik Signell saw the re-match as his team´s biggest chance to get some points.

The Swedish squad, was missing goalkeeper Johanna Bundsen and Norwegian playmaker, Stine Lund Andreassen, was also sidelined due to injury.  Midtjylland’s, hurt right-back,Louise Burgaard, did not play either.

Finally, Savehof took their first main round points, and they did it in style.  The Swedish record champion pulled a minor sensation by not only defeating FC Midtjylland, but also winning by no less than eight goals.  Not even six “two-minute” suspensions – compared to one for their opponents – bothered the home team this Friday night.  Substitute goalkeeper Isabell Mouratidou and left back Julia Eriksson were shining against a shockingly weak Danish team.   Midtjylland’s chances for a Champions League quarter-final are rapidly disappearing.

Savehof had nothing at stake, while Midtjylland was still chasing a possible quarter-final berth.  But an optimistic and unimpressed Savehof crew was completely dominating the encounter from the start, while Midtjylland could simply not make their game work.

The Danish champion played too slow, made too many technical mistakes and fired too many misplaced shots.  Savehof in turn benefited from their opponents´ surprising weakness and took an early 7:1 lead.  Still, Midtjylland managed to work themselves back into the game, at least to a certain extent, when they reduced the score to 8:10.

The visitors also benefited from four “two-minute” suspensions against Savehof, but towards half time, the home team was ahead by six again.  Midtjylland’s coach Helle Thomsen called two of her time-outs in the first half but nothing worked for the Danish team in the first 30 minutes.

If anyone was expecting a Midtjylland comeback, they were quickly proven wrong.   Savehof´s six-goal half time lead soon increased to eleven and Helle Thomsen´s third and last timeout, only six minutes into the second half, helped as little as the previous ones’ did.

Midtjylland tried a 5-1 defense as well as direct markings, but none of these measures showed any real effect against Savehof´s flexible play of attack.  The Danes did manage to reduce the deficit a bit, but they never got any closer than seven goals.

Many Savehof players deserved credit for the triumph, but two of them stood out.  With a saving percentage of 51, 18-year-old goalkeeper Isabella Mouratidou compensated completely for the absence of national team keeper Bundsen.  On the offensive end, another young player, 21-year-old left-back Julia Eriksson showed a stellar performance, scoring 11 goals.  In her disappointment over the defeat, Helle Thomsen – who is back as temporary Swedish national coach – must have made a note of young Eriksson.

In close competition with Julia Eriksson, the award went to Isabella Mouratidou.

Not so much because of saving 51 percent of all the shots that came her way, an impressive accomplishment in itself, by the way, but even more so because many of the saves – two of them being penalty shots – came at critical moments.  If the world of handball did not know about this young, talented goalkeeper before, it definitely does now.

Savehof can still hope to pass Midtjylland and avoid last place in Group 2, of course.  However, the Swedish team will need to win their last two matches, while Midtjylland only needs one more point to stay in front of the Scandinavian neighbor.  The prospects do not seem likely despite Savehof´s stellar performance on Friday night.  After all, Midtjylland still has a chance to reach the quarter-final.  They just have to defeat CSM Bucuresti by at least four goals at home next Sunday and hope that the Romanian side does not collect any further points in the main round.  And Stine Jorgensen & Co. could win their last match away against Buducnost as well… however unlikely it may be.