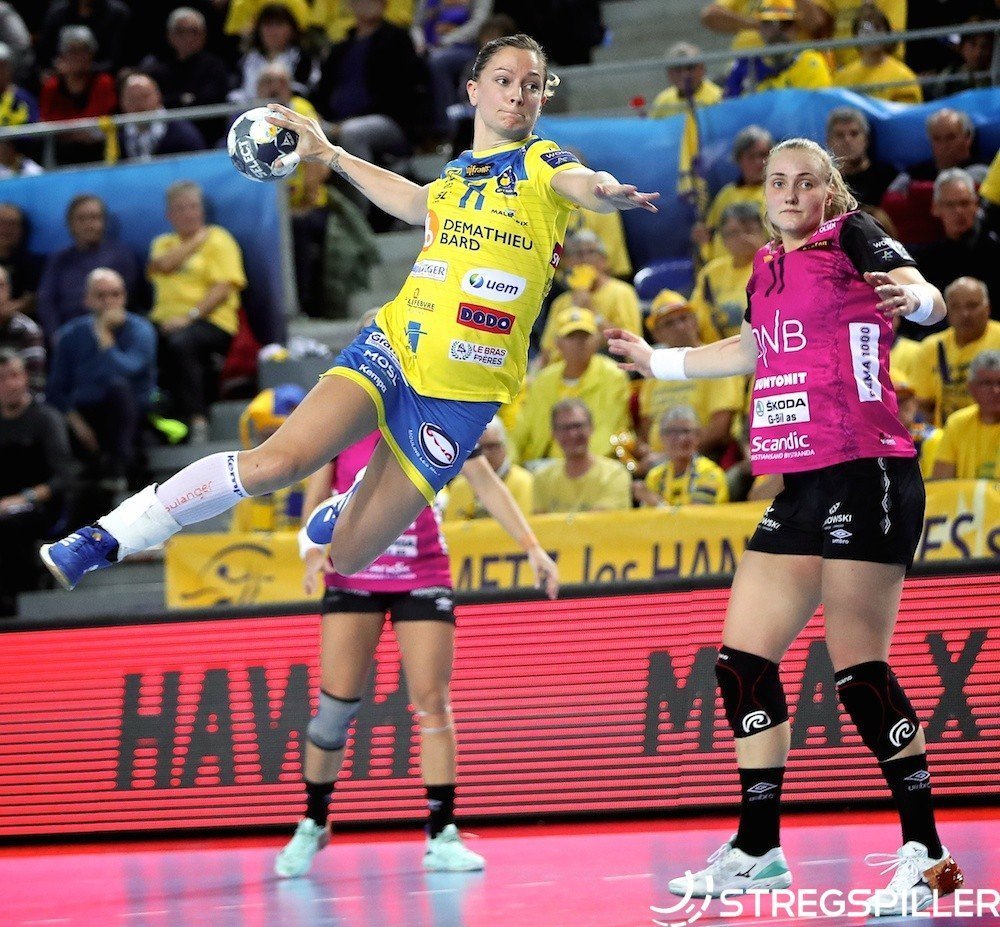 “A win tonight in this arena was just perfect”

Vipers Kristiansand came off a ten a goal win against Byasen (37:27) in the REMA 1000 Ligaen, whereas Metz recorded their first defeat in the 2019/20 season as they dropped the match vs. Brest Bretagne mid-week (28:29).

Currently, both clubs are suffering from a shortage of key players. Katrine Lunde and Henny Reistad (Vipers) continued to watch from the sidelines, as did Xenia Smits and Laura Glauser (Metz).

Ole Gjekstad (Vipers) and “Manu” Mayonnade (Metz), the two head coaches, had to improvise once again to make the best of a “short” bench.

As “Les Arenes” was occupied with the “Prodiges” concert until November 2nd, the two teams faced each other at a rather unusual time at 20:45 hrs., on Sunday night. Not necessarily the time and day to attract a huge crowd and a circumstance that Metz president, Thierry Weizman, addressed on the home page of Metz HB.  Yet, “Les Arenes” was almost filled to capacity as 4.066 spectators turned up in anticipation of a victory for the home team.

In the end Vipers could not keep up with Metz as goalkeeper, Ivana Kapitanovic, stepped up big in the second half, finishing the game with a 45% save rate. On the other side of the court Ailly Luciano had the hot hand, in particular in the opening phase of the match. Add to it a very physical defense and the success of Metz in Round 4 of the DELO EHF Champions League is explained.

It took almost 8 minutes before Silje Waade was able to break through and score the first goal for Vipers. Before it was all Metz, as the French champion jumped to a quick 4:0 lead.

Especially, right wing Ailly Luciano had a spectacular start to the game and scored 5 of her game high 7 goals in the first 14 minutes of the match. For a moment it felt like the host would be able to pull away quickly but instead the two teams kept trading goals until half time.

After the break Vipers got off to the better start and by the 33rd minute, Heidi Loke, had arranged for Kristiansand’s first – and only – lead in the game. A two-minute suspension of Marta Tomac changed the momentum once again. Metz went on a 5:1 run, effectively putting the game out of reach. Zaadi & Co. continued to build their lead until the final score read 26:17.

Simply put – Ivana Kapitanovic in goal, Ailly Luciano on right wing and a strong defensive effort by Metz made the difference. And, unlike two weeks ago, Vipers could not stage a comeback as Emilie Hegh Arntzen, Marta Tomac, Linn Jorum Sulland had a quite evening as neither one of them could get their game going – a fact that left Heidi Loke pretty much on her own on the line.

stregspiller “Player of the Match”

Ivana Kapitanovic’s performance in goal was outstanding! A save rate of 45% speaks for itself, yet Kapitanovic’s accomplishment cannot be over emphasized, as she HAS to perform after the injury of Laura Glauser.

Kristiansand is facing a very similar problem following the knee injury of Katrine Lunde, but neither Andrea Pedersen not Yurou Yang, who saw some minutes towards the end of the game, were able to step up.

“A win tonight in this arena was just perfect, I could not ask for more.”