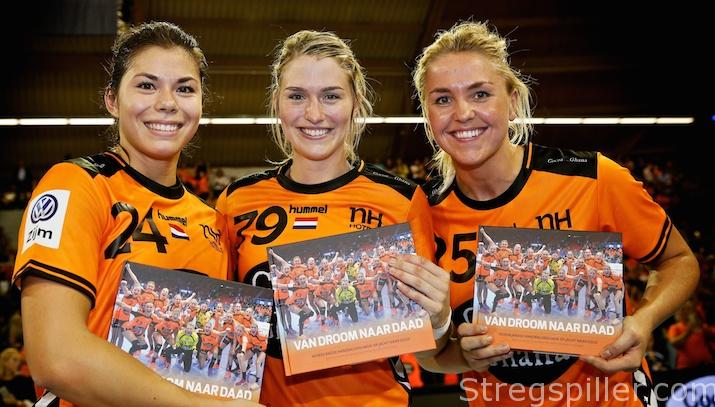 When the German handball national team, the so-called “Ladies” of Michael Biegler, played two friendly matches against the Netherlands, in late October, they faced a side of youngsters, as the games were not part of the international calendar.  The main purpose was to celebrate 100 years of handball in Germany, but secondly it was a welcome  preparation for the upcoming World championship, in December.

The very young Dutch squad certainly lacked experience and maturity, but not necessarily less talent. And although they lost both times, they didn’t get crushed either.  In a couple of years some of the orange clad players will probably be regulars on the team, a crew that reached the finals in Denmark 2015 and in Sweden 2016, losing to Norway on both occasions.  What’s the reason for the success in the Netherlands, a country that is anything but a traditional handball nation?

The guy who explained the secret recipe to me is Robert Nijdam, who is working for the Dutch handball federation.  I have to admit that I would believe him even he was telling me elephants could fly, because I know him for such a long time – he is one of the most humble and trustworthy people in all of handball.

After the Dutch national team finished fifth at the 2005 World championship in Russia, led by a young playmaker called Pearl van der Wissel, the federation was pondering how to preserve and build on the achievement.  They founded an academy in Papendal, a town just around the corner from Arnhem, close to the German border.  Basically, the facility allows the players to study not far away from their very own handball campus.

“The players arrive here late Sunday evening and stay with us until Friday; then they leave for their respective clubs to play the league matches,” Nijdam explains.

“It’s the major element in developing young players, that translates to success on the international level. While it would be impossible to train more than eight hours per week in a regular Dutch club, the academy offers first class facilities and the opportunities to train at least 20 hours per week.

“It also means that the players get to know each other at a very young age, thus making sure what to expect, or not, from teammates, on and off the court.  It also creates a special bond between the players, which I consider being a major part of becoming successful on the senior level.

“We have 25 players in our academy and 13 of the 16 players that won recent silver medals used to train in Papendal,” Nijdam adds.

It definitely pays off and I remember very well when Tess Wester, Lois Abbingh and Laura van der Heijden were all playing for German side VfL Oldenburg at a very young age but enjoying a lot of playing time.  The results are obvious – all of them are key players on the national team, today.  And according to Nijdam, they are well prepared for the future.

“I think we already got some very good players in the pipeline, right now.”

It all looks like a very good concept that really works if the right people are involved.  Dutch coach, Henk Groener, who is set to take over the German handball  team, might dream of an academy every once in a while during his tenure.

Even though the Dutch players don’t receive an Oscar after “attending” Papendal, it somehow feels like every medal they win is their very own Academy award.