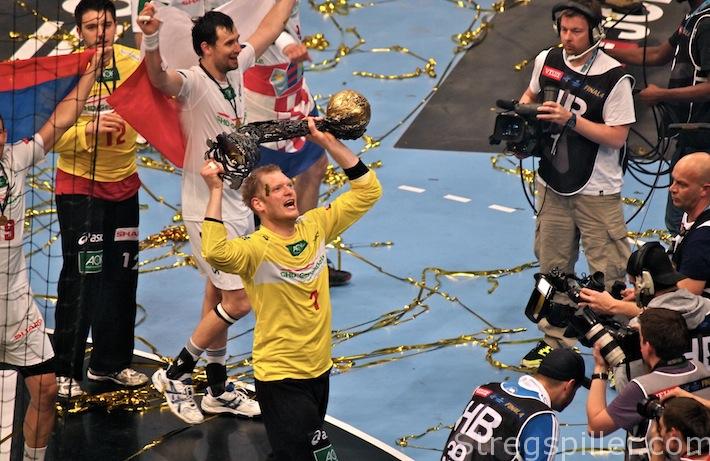 The Acid Test Ratio is a stringent indicator that determines whether a firm has enough short-term assets to cover its immediate liabilities without selling inventory.

The term comes from the way gold miners would test whether their findings were real gold nuggets.  Unlike other metals, gold does not corrode in acid; if the nugget did not dissolve when submerged in acid, it was said to have passed the acid test.  If a company’s financial statements pass the figurative acid test, this indicates its financial integrity.

In the fast-paced world of professional sport, team managers are increasingly struggling with maintaining ample liquidity to keep operations afloat.  Running a professional handball organization is no exception as HSV Handball found out recently – again.

As several times before the club was staring at the abyss and long time patron and president Andreas Rudolph decided to step in once again and pay all monies currently due.  In a hastily arranged press conference he described the financial condition of the reigning Champion’s League winner as being “dramatic” and in urgent need for reorganization. An immediate cash injection by Rudolph of EURO 500,000.00 assured that liabilities in the month of February would be met.  Managing director Christopher Wendt was relieved of his duties with immediate effect and seven other front-office employees received their termination notices.  Players with contract expirations in summer 2014 had already received pro-forma notices by the end of last year.  The whole situation was reminiscent of the year 2004 when Andreas Rudolph arrived on Hamburg’s handball scene and was asked to rescue the club for the first time from the brink of bankruptcy.  Since that time, according to various German news reports, Rudolph contributed approximately EURO 20+ Mio. to the financial well-being of Hamburg’s “Team of the Year”.  His money made it possible to assemble a squad that won the German championship (2011) and Champions League (2013) but it did not result in the financial stability or economic independence that he had wished for.  “HSV Handball would not exist without me”, were Rudolph’s words in 2004 – a truth that is still valid ten years later.

What are the reasons that HSV Handball finds itself in the “liquidity trap” again and again?

Financials problems rarely develop over night and Hamburg’s most recent developments showcase the complexities of competing at the highest level of handball while keeping the club on economically sound footing.

Almost a decade has passed since president Andreas Rudolph provided his first emergency cash injection to the ailing handball organization.  Over the years, in addition to putting money on the table on a regular basis, he did get involved in running the operation, staffing the team, hiring and firing managing directors and selecting coaches – sometimes a bit more and sometimes less.  The system had a name as well – the so-called “Lord of the Manor” approach.  Often but wrongfully associated with the management style of Bayern Munich’s legendary football entrepreneur Uli Hoeness.  While Hoeness has been obsessing for decades about every detail in developing the football club from Bavaria into the international powerhouse it is today the same could not be said about Rudolph’s involvement at HSV Handball.  In short – while Bayern Munich’s former manager used to be in the “driver’s seat”, Andreas Rudolph chose to operate from the “back seat” of his presidency for most of the time.  Quiet possibly irritating management and sponsors alike.

Since 2004 HSV Handball managed to win three national titles (1 German Championship plus 2 Cups) as well as two international trophies (1 Champions League and 1 EHF Cup Winner’s Cup) not counting Supercup’s and the likes.  An accomplishment demanding respect but insufficient given Rudolph’s investment over time and apparently not enough to attract and maintain premium sponsorships. By the way, during the same time period Hamburg’s number one rival, THW Kiel, won sixteen titles (12 national and 4 international trophies) again not counting Supercup’s etc.

While the financial circumstances at HSV are “dramatic” – the overall situation must be described as desperate.   The fact that Rudolph has been reaching out to Uwe Schwenker, the former manager of arch-enemy THW Kiel, demonstrates how disillusioned the president has become not only with the economic state of affairs but even more so finding capable management.  To no surprise Schwenker declined the offer.  Amongst other factors it’s safe to assume that he did not entirely forget that A. Rudolph was instrumental in spreading rumors and accusations of him bribing referees to assure Kiel’s first Champions League win in 2007.  Eventually, it all led to extended court proceedings involving Uwe Schwenker and long-time THW coach “Noka” Serdarusic.

Andreas Rudolph will have to look elsewhere to fill the vacant position of managing director.  Certainly any potential candidate will look at the brief but informative period when Frank Rost headed Hamburg’s front-office for six weeks in the summer of last year.  Rost was announced with much fanfare when he took the job on July 1, 2013 with the primary objective of sponsorship acquisition.  Only 43 days later the relationship ended in a mud-slinging contest between Rost and the Rudolph brothers – at the time Matthias Rudolph was still engaged and president of HSV Handball.  According to Rost, he was by-passed in the hiring of right-back Zarko Markovic as a relief player for the injured Adrian Pfahl.  Apparently, the transaction was orchestrated involving coach Martin Schwalb, the 2nd managing director Christoph Wendt and the Rudolph brothers.  Unacceptable circumstances that Rost did not want to tolerate any longer.  It all ended with a public apology from HSV Handball to Frank Rost including the mandatory well-wishes for his professional future.

While HSV Handball continues the search for the right candidate for what maybe the hottest seat that Handball Germany has to offer – aside from being national coach – any potential prospect is well advised to make sure that he or she (?) will get the current benefactor to make, at a minimum, below three commitments over the medium term:

The organization of HSV Handball will not be repaired in six months or so.  Any serious manager will need the time to re-build the club almost from scratch.  First, the candidate will have to hire a new front-office.  Secondly, immediate development of a marketing strategy that has realistic potential to attract two to three “corner-stone” sponsors that can lift the financial burden off Rudolph’s shoulders over time.  These new sponsors do not have to believe in HSV Handball anno 2014 but in the vision of a club that has yet to be built.  If former manager Bob Hanning can do it in Berlin someone should be able to accomplish the task in Hamburg.

At this moment there is only one certainty – the current business model of 1-800-RUDOLPH is not sustainable.  Rudolph is part of the problem and part of a hopefully long-term solution.  He knows it, coach Schwalb knows it and so do current and potential sponsors.  For now, HSV Handball has passed the acid test but it’s not gold.