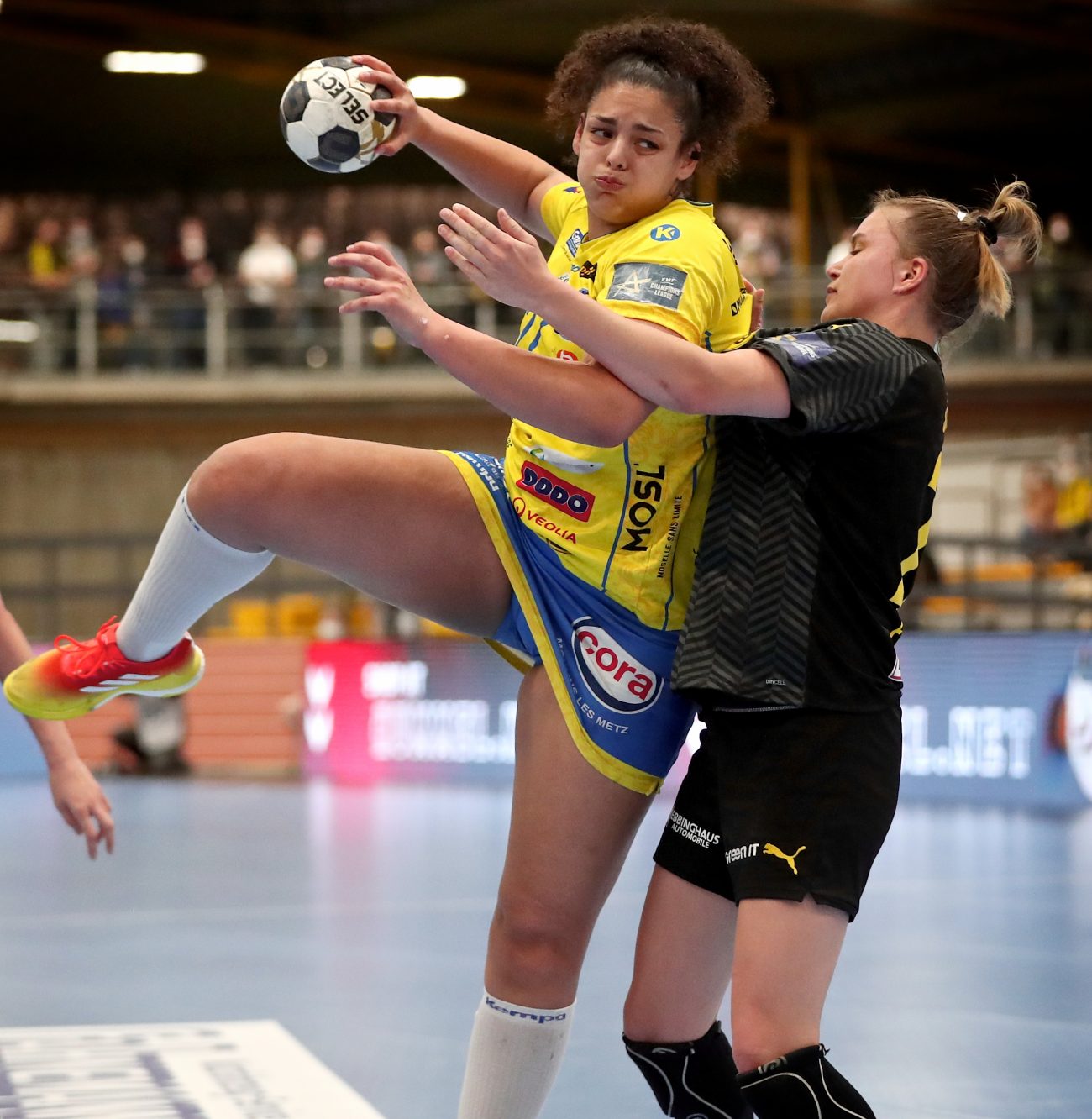 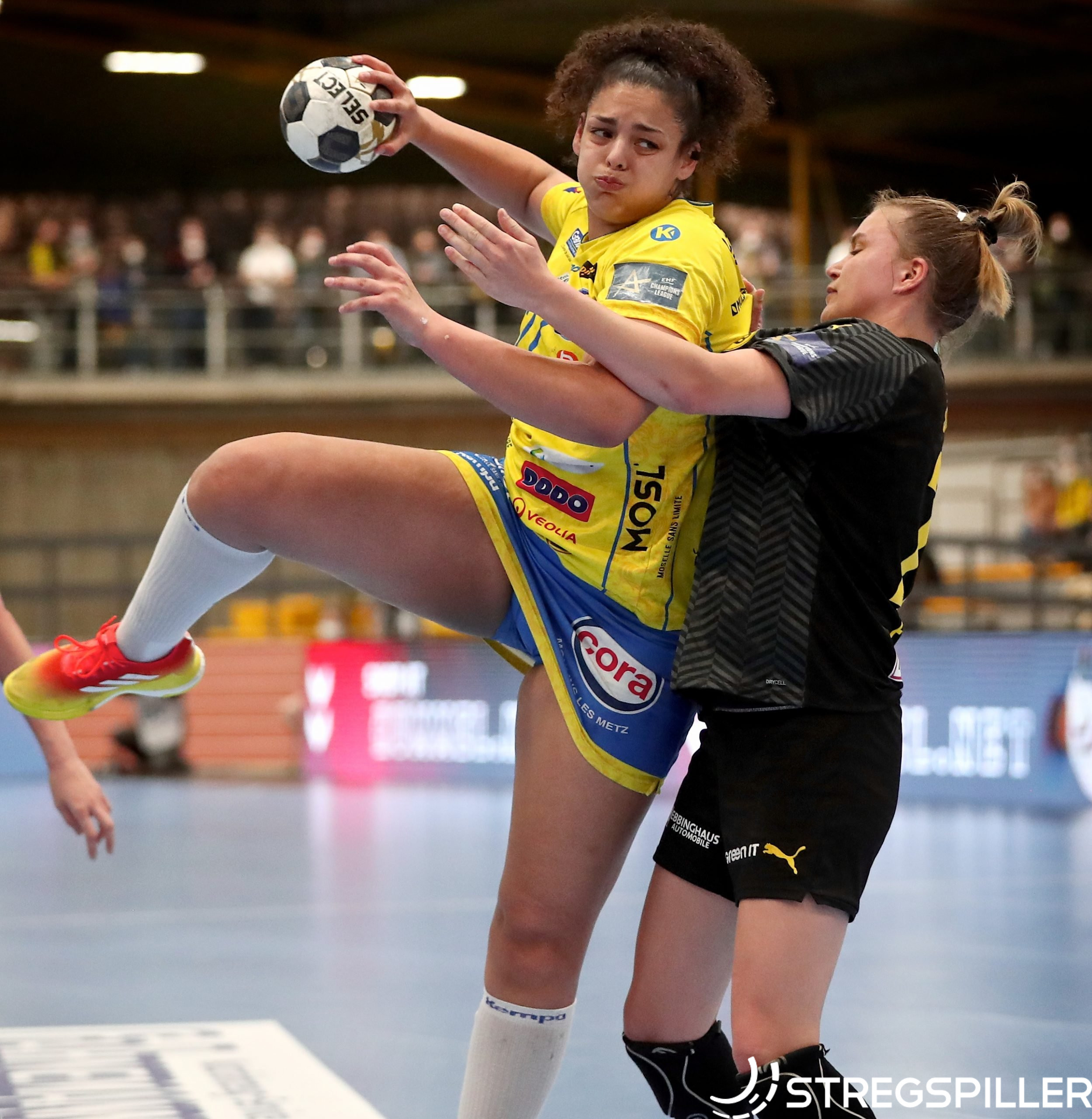 It’s only the Round of Last-16 in the DELO EHF Champions League, but BVB Dortmund and Metz HB are already fighting for a FINAL4 appearance in Budapest, later in the spring.

The EHF’s suspension of Rostov-Don (the would-be quarterfinalist) as a consequence of Russia’s invasion of neighboring Ukraine made it all possible.  This past Saturday, the two clubs from Germany and France met in the first leg at Helmut-Koernig arena, in Dortmund.

The team of Dortmund’s head coach, Andre Fuhr, entered the match as the obvious underdog, handicapped by the injuries of numerous key players (Bleckmann, Amega, Berger, Sasaki, Woth) in addition to the disruptions caused by the still fast-spreading Corona virus, in Germany.  The two absentees in the squad from Metz (de Paula and N’Gouan), appeared negligible compared to the problems the host was facing.

Less than eight minutes into the game, Metz had jumped to a quick lead (6:1) and never looked back. Two early time-outs did nothing to interrupt the flow of the match and when Danish international, Louise Burgaard extended the lead to seven goals, the affair was effectively decided.

Dortmund deserve credit for not collapsing, but fighting back after the break.  Led by Germany’s Handball Player of the Year 2021, Alina Grijseels, cut the deficit to five (52nd minute), before Metz went on a 4:1 run to close out the first encounter between the two teams in the Round of Last-16.

Goalkeeper Ivana Kapitanovic showed up big, befitting the occasion.  The Croatian international saved 18 of the 39 shots (48%) that came her way.

Before the match in Dortmund, some of the pundits had credited Grace Zaadi – the 2021 French Olympic gold medalist recently joined her former club on loan from Rostov-Don – for Metz having an unfair advantage.

No doubt, Zaadi is one of the best center-back players in the world and most every team would be blessed having her in the lineup, but she did not make the difference in the match at Helmut-Koernig arena, this past Saturday.

Instead, Sarah Bouktit (19) is probably the most notable representative of several players, who deserves praise in advancing Metz to this stage of the season, where the club finds itself still fighting for three trophies.

After the unexpected and unfortunate departure of line player Olga Peredery.  The Ukrainian international ended her career because of injury at the beginning of the 2021/22 season, head coach, Emmanuel Mayonnade, had to fill a void at both ends of the court.

Sarah Bouktit answered the call and stepped-up big and not only in the game against Dortmund, where she scored five times. The homegrown talent is probably the Metz player with the steepest development curve in recent months.

In March of this year, the bronze medalist of the 2019 European youth championship was nominated in the French senior squad for the qualifying matches for EURO 2022, for the very first time – a logical consequence of her progression.

However, Bouktit is not the only Metz player, who helped the club fight through adversity.

Emma Jacques, Melanie Halter or Anne Emmanuelle Augustine are some of the other names, who stand for the club’s impressive youth development and who enjoy the trust and support from coach Mayonnade.

Certainly not a given in today’s world of professional sport, where most teams look for instant gratification rather than patient talent grooming.

On April 2, the two teams will meet again at ‘Les Arenes’ in Metz.  The ambience will be festive and expect “Les Dragonnes” to pack the house in anticipation of a second trip to the DELO EHF FINAL4, in Budapest.

Can Dortmund spoil the party? Unlikely, given the meaningful deficit of the first leg match and the breadth of the Metz squad, but look for a spirited fight as Grijseels & Company may feed off the energy of another “Yellow Wall”.