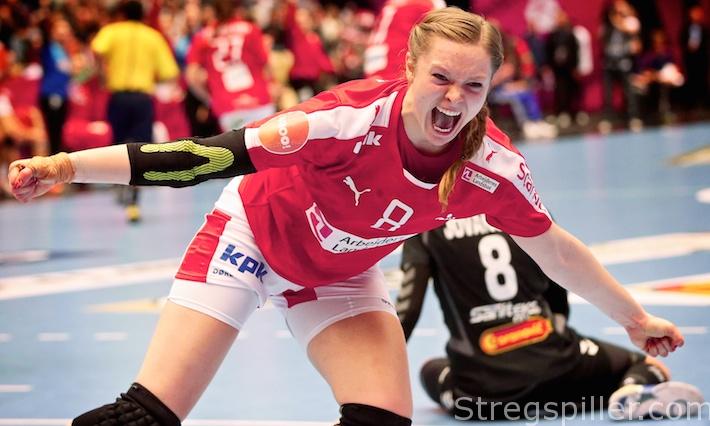 So far the home team has delivered at the low end of expectations at the 2015 World Cup.  Coach Jorgensen’s defensive measures have not had the positive impact that he and all supporters of Danish handball have been hoping for.  Next, his squad will meet Sweden in a “Do-or-Die “ 1/8 final.  Will Line Jorgensen (if she is able to play) & Co. resurrect themselves following two dismal games against Hungary and Montenegro or is team Denmark just not good enough to hang with the top contenders at this years World Cup?

Elsewhere, Norway is moving forward while coach Hergeirsson’s team form curve is pointing in the proper direction after the victory against Spain.  The recent results are in line with – as usual – high expectations before the year-ending, premier handball event enters its critical phase.  In Norway’s final Group D encounter, Elisabeth Pinedo scored her 400th national team goal but that was all the Spaniards had to celebrate.  The right side of Norway’s attack, consisting of Nora Mørk and Amanda Kurtovic proved to be particularly effective in their 29:26 (18:12) win.

Germany waits in the 1/8th final – a crew not to be underestimated after a brilliant but also unexpected performance versus South Korea.

The last game in Group A had the taste of a final – Denmark vs Montenegro – the host versus the handball powerhouse from the Balkan.  12.000 spectators, in a jam packed Jyske Bank Boxen, were eagerly awaiting their team to reverse course, following the previous loss against Hungary.  Once again the hall was “cooking” and anticipation running high.  Denmark’s left-wing, Maria Fisker, scored quickly but it should remain the only time, the squad of head coach Klavs Bruun Jorgensen would enjoy the lead that evening.  Shortly thereafter Katarina Bulatovic & Co. took over and began to control the game.  Coach Dragan Adzic prepared his crew extremely well and a multitude of Danish turnovers helped to extent the lead to five goals at halftime (12:7).  Unfazed by the raucous crowd and fully concentrated, Montenegro continued where they left off after the first thirty minutes of play.  19-year young, Durdina Jaukovic took matters in her own hands and scored five of her seven goals in short order.  By minute 40, she together with Katarina Bulatovic had built a six-goal advantage, effectively putting the match out of Denmark’s reach.  Denmark outscored Montenegro 8:5 during the last 20 minutes of the game but it was too little too late.

Master vs. apprentice or Dragan Adzic (Montenegro) versus Klavs Bruun Jorgensen (Denmark).  Denmark did not only get out-performed on the pitch but on the bench as well.  Once again Denmark’s new style of mounting an open field, aggressive defense, failed to impress the opponent.  In particular Rikke Skov was – literally – operating outside of her comfort zone and Montenegro took full advantage of it.  Coach Jorgensen’s approach to defense may have its merits on paper but he does not have the players that can successfully execute whatever system he has in mind – at least not yet.  On the other end of the court, the observer was left with the question why Denmark’s emotional leader, Ann Grete Norgaard did not see any time on the field?  It was already bad fortune that right-back, Line Jorgensen had to sit out the entire match because of a swollen knee.  Norgaard with no minutes on the court did hardly make any sense.

Adzic, on the other side took full advantage of his “short” bench.  The versatility and individual quality of his players proved to be superior – aside from Bulatovic and youngster Jaukovic, especially noteworthy performances were provided by Jovanka Radicevic, Majda Mehmedovic and playmaker Milena Raicevic.  All three of them showed up in positions that are typically occupied by others (i.e. pivot, right-wing, left-wing).  In short, Montenegro’s coach had what his counterpart did not have – players that would execute a proven system successfully on both ends of the court.

In all fairness it needs to be mentioned that Jorgensen is working with his lot of players since the beginning of the year whereas Adzic is enjoying the fruits of his labor at his home club, Buducnost Podgorica, on the national team as well.

The two youngsters, Anne Mette Hansen (21) and Durdina Jaukovic (19) put their skills on display in the last match of Group A. As her namesake on Denmark’s men’s handball team, Anne Mette almost single handedly kept her teammates in the game. She, next to right-back Louise Burgaard, was the only Danish player that could match Montenegro physically. One of the reasons why Jaukovic walked away with the IHF’s official award of “Player of the Match” was her outstanding performance in Montenegro’s central defense. In any event, it was a night to remember for players and spectators alike – two new stars stepped on the international handball stage and they can be expected to stay for years to come.

The loss against Montenegro leaves the Danish women in 3rd spot in Group A, calling for an all Scandinavian 1/8 final vs Sweden. The players of both squads know each other extremely well since many of Sweden’s national handball women earn a living in Denmark’s “Boxer” league.  Sweden may also be the most suitable opponent for Denmark given its current state of affairs.  Yet, most experts say “advantage Sweden” not the least because of coach Sivertsson’s team firepower – no squad has scored more goals (192) than Bella Gullden & Co. – and Denmark’s two most recent defeats at Jyske Bank Boxen and the way they came about. On the other hand, coach Jorgensen may have the better goalkeeping duo (Toft/Poulsen) assuming they won’t be left alone this time around?  Expect another thrilling encounter in the arena at Herning, in front of a sell-out crowd – hopefully not for the last time at the 2015 edition of the women’s handball World Championship.