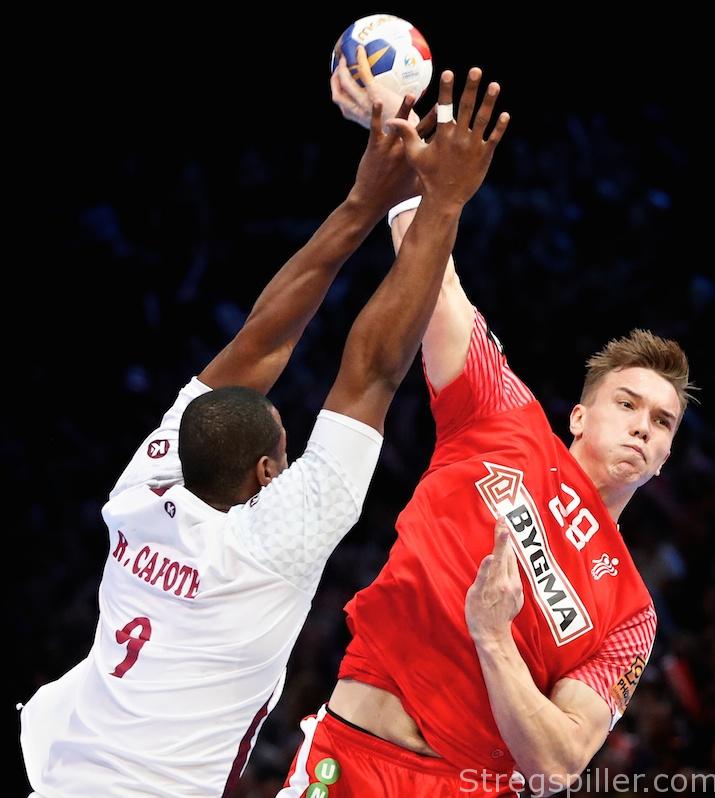 “All four teams will play a similar style of handball”

INTERVIEW – The fact that all four teams at the VELUX Men’s EHF FINAL4 in Cologne will be led by Spanish coaches gives the four semi-finalist a common dimension, finds Denmark’s international Lasse Andersson (Barca Lassa).

Does it also mean that all four teams have an equal chance to win the competition? Andersson provides some answers in this exclusive interview with stregspiller.com.

This season Lasse Andersson has celebrated an impressive comeback after being sidelined for a total of 407 days, after rupturing his anterior cruciate ligaments on two different occasions.

During the long injury break, the 25-year-old left back admitted that there were times when everything appeared hopeless.

“Now, I appreciate what I am doing even more and I’m more driven than usual,” he said.

The extra push has been noticeable in his matches for Barca Lasse in the 2018/19 season, where head coach Xavi Pascual has awarded him with more time on the pitch.

On the very day I spoke to Lasse Andersson, Denmark´s head coach, Nikolaj Jacobsen, rewarded his efforts as well, inviting him back to Denmark´s national team for the remaining two qualification matches for next year´s European championship – against Ukraine and the Faroe Islands.

“I have not given the national team much thought as of late. I just thought that I deal with a nomination when it happens, but of course I am glad to be back,” Lasse Andersson tells stregspiller.com.

Winning the Champions League is a must

In 2018, Barca dropped out in the Round of Last 16 against Montpellier HB, a team that emerged from Champions League groups C-D – including inferior competitors, as many thought. It certainly was no consolation that Montpellier went on to win the competition.

“The fact that we were eliminated already in the Round of Last 16, last season, has made us even more determined to redeem ourselves and win the competition this year.

“This is not just a feeling – it is talked about openly and in no uncertain terms. When you play in Barcelona, winning the Champions League is the big goal every year and that’s what we train for – this year even harder after the disappointment in 2018,” explains Andersson, who is looking forward to his very first FINAL4.

Since the summer of 2016, he has been playing for Barcelona, that’s when he joined from KIF Kolding Kobenhavn. But due to the aforementioned injuries, he missed the FINAL4 in 2017 and last year, of course.

“I am very much looking forward to my first FINAL4. I have never been to a FINAL4 before, not even as a spectator – so it will be a completely new experience to me.

“Of course, I have been watching the games on TV, but obviously that’s not the same as being part of the action. My teammates have told me what it’s like to be there and that has made me even more curious,” he says.

Good chances of taking the trophy

“I think our chances of winning the competition are good, but then again, all four teams probably have more or less the same chance of succeeding.

“The fact that all four finalists are led by Spanish coaches means that their style of play will be very much alike, although each one of them have their own strong points.

“As I said, I think our prospects are good, but it may very well turn into some close matches, when a goal in the last seconds will make the difference in the semi-final as well as the final. To us, it simply is a matter of being ready, when the referees blow the whistle in our semi-final, on Saturday.  That’s what we are training hard for these days,” says Lasse Andersson.

In Cologne, Barca will be up against HC Vardar, the same team that sent them out of the tournament two years ago, with a goal in the dying moments of the match.  26:25 did Vardar win on that occasion before claiming the trophy in the final game of the tournament, 24:23 against PSG.

Because of his injury, Andersson did not experience the loss first hand, but he does not sense that the two clear victories against Vardar during the group phase have extinct the memories of that semi-final two years ago.

“The defeat back then will probably still be in the heads of some of the players who were part of it, but to me it does not really matter which opponent we’ll meet in the semi-final.

Likewise, it won’t matter, if it will be Veszprém or Kielce in the final on Sunday, if we overcome Vardar.

“As said before, all four teams will play a similar style of handball because of the Spanish coaches.  It also means that we are not likely to see anything unexpected – we’ll have an equally good chance against all of them,” finds a confident Lasse Andersson.