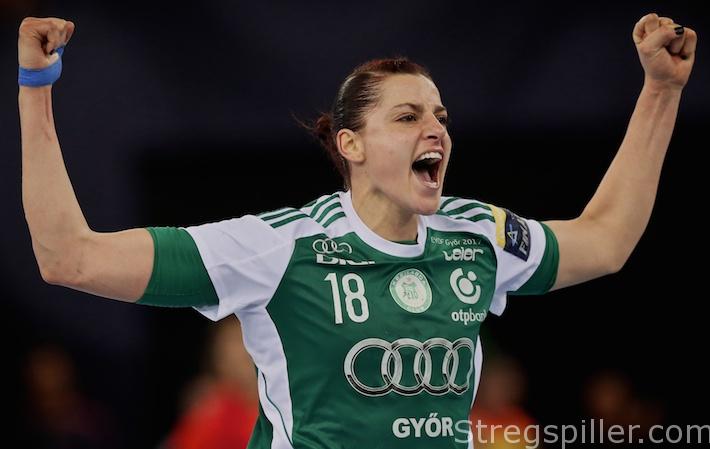 MATCH OF THE WEEK

Eduarda Amorim played a deciding part, as Gyor managed to change a 9:13 deficit at half time into a 27:24 victory in our Match of the Week, on Friday evening.
In a game, where Nora Mørk struggled, Amorim changed everything when she joined Gyor’s offense after the break.  Gyor successfully revenged the defeat against Bucuresti in the Champions League final back in May.

The encounter between the two top teams was labeled the revenge game for the close and dramatic Champions League final of the previous season, when CSM defeated Gyor 29:26 after two extra time periods, followed by a penalty shoot-out.  This season, Gyor got off to an impressive start in their group matches, winning 31:19 at home against FC Midtjylland and 28:27 in a fantastic finish against Rostov-Don.
In contrast, both of CSM´s Champions League matches of the 2016/17 season, ended with the score of 24:21.  In their opening game, the ruling Champions League winner won at home against Rostov-Don, before suffering a surprising defeat against Midtjylland with the reverse score.  This evening, CSM continued to play without right-back Line Jørgensen due to injury, just as Gyor were still without left-back Zsuzsanna Tomori.

With former CSM- and current Hungarian national coach, Kim Rasmussen, among the spectators, the two clubs traded goals in the opening minutes of the game.  Not even the premature departure of Gyor goalkeeper Kari Aalvik Grimsbø – she left the floor with a knee injury after a collision with her teammate – shook the visitors who went ahead 7:5.

But Gyor did not manage to hold on to their good start.  The Hungarian team was lacking height and efficiency when in attack, and Nora Mørk was struggling in particular.  The Norwegian international did not look like her usual self and was unable to score on any of her three attempts.

Surprisingly, Gyor coach Martín Ambros did not use Eduarda Amorim in his offensive lineup during the first 30 minutes even so the Brazilian international had scored seven goals against Rostov-Don just one week ago.  Instead, Amorim was playing defense – but only for a quarter of an hour.

She quickly collected a couple of two-minute suspensions and did not see the court for the rest of the half.  Gyor´s early 7:5 lead was erased quickly and the rest of the first half belonged to CSM.

A solid 6-0 defense and a well-playing Jelena Grubisic in goal, changed the initial deficit forthe home team into a four-goal advantage once the half-time buzzer sounded.

From the start of the second half, Eduarda Amorim re-appeared on the court – this time in attack.  It changed the course of the match immediately.  Amorim added the necessary shooting power to Gyor´s attack that was missing in the first half.

Scoring twice quickly, she reduced the deficit from four to two goals, and in the minutes that followed, she became a significant factor, allowing Gyor to catch-up within the first 10 minutes of the second half.

Amorim scored five goals on five attempts in almost no time, and all of a sudden, CSM´s flat 6-0 defense was no longer good enough to stop Gyor.

At the same time, Grubisic did not have as much success anymore either – she was replaced by Paula Ungureanu.  The move helped the home side a bit but not enough.

By minute 40, Anita Görbicz had scored the equalizer (16:16) and Nycke Groot provided the visitors with the lead shortly thereafter.  Gyor went ahead by three and did not surrender the advantage for the rest of the match.

Amorim´s presence left more space for her backcourt colleagues as well, and one of the beneficiaries was Nora Mørk.  With less than eight minutes left to play, she could celebrate her first goal of the match, making it 24:21 – and it was Mørk again who sealed the Gyor’s victory at 27:24.

Ambros Martín’s decision to include Eduarda Amorim in Gyor’s attack at the start of the second half changed the match.

Her early goals, made an immediate contribution, allowing Gyor back into the game in a hurry.  All of a sudden, CSM´s flat 6-0 defense was rendered insufficient and by the time CSM had adjusted, Amorim continued to create space for her teammates who took full advantage.

Eduarda Amorim – who else?
After an unfortunate start with two early suspensions, she became the match-deciding factor after the break.  The 30-year-old Brazilian international got Gyor back into the game, and guided her teammates to yet another important road win after last week’s success in Rostov-Don.

It is difficult to look past Gyor when weighing the chances of the other Champions League favorites.  By now, the Hungarian all-star team has defeated two of their strongest rivals for the title while having secured four crucial points for the main round – not the last one’s en route to the FINAL4 in Budapest, 2017.

Still, we should remind ourselves that the Champions League is decided in just one single match at the end of a long season.  One Sunday afternoon in May will decide everything.

Gyor´s opportunities may suffer a setback depending on the seriousness of Kari Aalvik Grimsbø´s injury.  It did not look good when Norway’s national goalkeeper had to leave the floor early in the game.  We can only hope the best for Grimsbø.

CSM’s coach, Jakob Vestergaard, must begin to worry – at least a bit.  Two successive losses – on the road against Midtjylland and on home ground against Gyor – were definitely not what the ruling champions were expecting.
Maybe, Vestergaard and his players can take comfort and encouragement by the fact that CSM were slow starters last season as well – before everything turned into a fairy tale for the club from the Romanian capital.