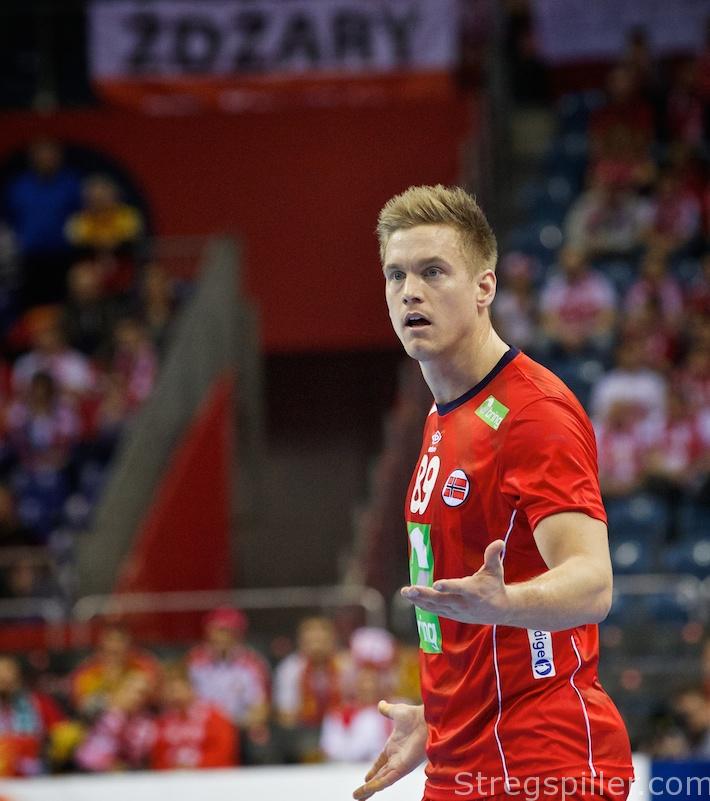 INTERVIEW – From a bankrupt team at the bottom of the Danish league to playing in the EHF Champions League FINAL4 – this has been the journey of Norwegian international, Espen Lie Hansen, in the 2017/18 season.

Right before the New Year 2018, Espen Lie Hansen´s handball life was filled with uncertainty.  It was doubtful if wages would arrive on time and another question  if he would find a new club in the middle of the season?

In sum, it was not exactly the best way for the 28-year-old Norwegian international to prepare for the European championship in Croatia, in January.  His Danish league club, HC Midtjylland, was in deep financial crisis, which would end in bankruptcy, eventually.  But before it all reached rock bottom, Lie Hansen had located a new club – HBC Nantes.

The hard-shooting left back joined the French team who were in the middle of their Champions League group phase.  Some kind of a change for Espen Lie and the rest is history.  For the first time ever, Nantes and Espen Lie Hansen will compete in the FINAL4 in Cologne.

“Of course, it has been an incredible journey.

“Obviously, I didn’t even dream of anything like this, when I started this season.

“Yes – I am sad that HC Midtjylland went bankrupt, but I must say that I found the best possible solution for myself,” Espen Lie Hansen tells stregspiller.com.

Yet, the Champions League was not entirely new to him when he joined Nantes.  He already gained some experience in the league with Drammen HK in the 2007/08 season and again with Danish Bjerringbro-Silkeborg in 2011/12, in both cases not making it any further than the group phase.

“The fact that I have played the Champions League before has helped me a bit this season, but I have also been able to benefit from my international experience with the Norwegian national team.

“It certainly worked to my benefit, as I was simply thrown into the games from the start, when I arrived in Nantes.

“Actually it was an advantage as it helped me to get integrated in a hurry and now I find that things work really well for me within the team,” explains Lie Hansen who is not a complete stranger to French handball, as he played one year in Dunkerque in the 2013/14 season.

But the FINAL4 is something completely new to Espen Lie Hansen.  Having reached the quarter-final, where Danish Skjern and Hansen´s Norwegian national teammates Eivind Tangen were defeated was already a historic step for HBC Nantes.  Now, they can continue and add another successful chapter at the FINAL4.

“It is easy to feel the pride and the enthusiasm in the club as well as in the city. There really is handball fever here (in Nantes ed.) and people are very proud and really looking forward to the FINAL4,” he says.

He is also looking forward to playing his first ever Champions League FINAL4 at Lanxess Arena, in Cologne.

“It is the greatest experience you can have as a handball player.

“Everyone who has played there tells you how big it is – naturally, my expectations are high.

“I have been to the FINAL4 a couple of times before as a spectator and that was great in itself.  It will simply be fantastic to be there as a player,” he expects.

As is known by now, Nantes will not be the only French team fighting for the big prize, in Cologne, this year – far from it.

Paris Saint-Germain, the current number two in the French “Lidl Star League” will be in attendance and Nikola Karabatic & Co. will be Nantes´ first opponents in the semi-final, next Saturday.

“Of course, Paris is the team virtually everybody is expecting to win the Champions League every year and the fact they have not done so yet, will probably make them even more anxious to get the job done, finally.

“I think that we should simply enjoy the moment and the fact that we are the underdogs and that we can play free without any pressure.

“Once you win the semi-final, you stand in the final all of a sudden and in a tournament like this one with two matches in two days, the team with the freshest mind often wins.

And then, there’s the moment when you stand (on the podium ed.) with the trophy in your hand – after all it’s not that far away,” dreams Espen Lie Hansen.