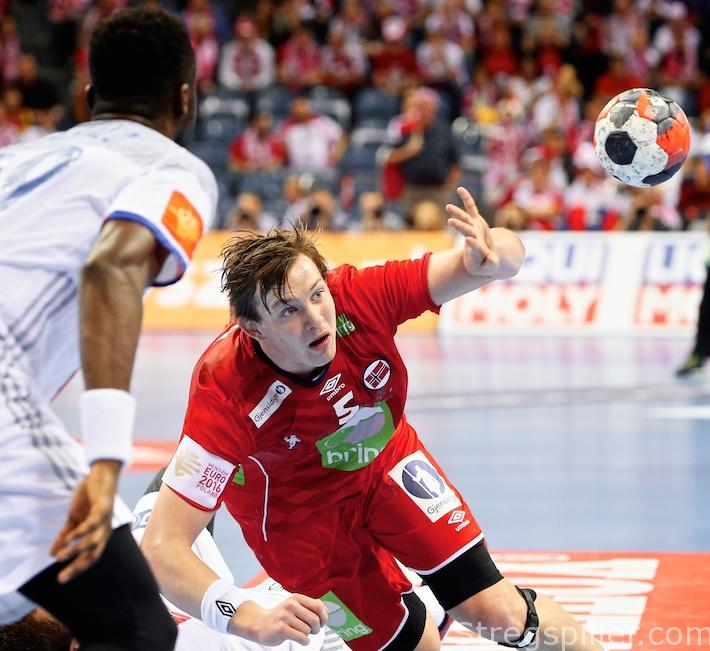 And the semi-finalists are…

Crunch time finally came in both main round groups – but with unfair odds!

Norway’s dream turned into reality at EURO 2016.  The team of coach Christian Berge qualified for their first semi-final ever at a major championship by defeating France in convincing fashion 29:24.

Germany pulled almost as big a surprise, eliminating Denmark 25:23 but that was not the end of it – Croatia smashed the Polish hosts 37:23, while Spain was the only team that lived up to expectations, winning over Russia 25:23.  Spain will meet Croatia, while Norway and Germany run into each other in the second semi-final.

All teams of Group 1 and 2 were playing on the final day of the main round.  This meant that some teams in Group 2 had to play two matches within two days, while their opponents had three rest days behind them.  This unfortunate scenario applied to the decisive match between Germany and Denmark, where Germany had three days to rest and prepare for this critical encounter, while the Danes had 20 hours.  Fair conditions? No!  Poor planning? Yes!

Gameday began with two matches that were irrelevant for the semi-finals. Belarus – with only nine players on the team sheet – defeated Macedonian 30:29 in Group 1 and Sweden thrashed Hungary 22:14 in Group 2.

In Group 1, in Krakow, France took on Norway, while Germany and Denmark met in Group 2 in Wroclaw.

Just like Sweden versus Denmark, on the previous day, Germany against Denmark is a classic duel between neighbors.  When it comes to sports, the Danes mostly relish the memory of the 1992 football European Championship final, where they defeated Germany 2:0 in Gothenburg.  Lars Christiansen´s penalty goal after time in the semi-final at EURO 2008 does not rank far behind.  That goal secured a 26:25 victory and the ticket for the final against Croatia, which Denmark won as we all remember.

Having pulled off two surprises already, defeating Croatia 34:31 and Poland 30:28, Norway was dreaming of a third miracle against France.  The unexpected outcome would be necessary in order to reach the semi-final of a major championship for the first time in the history of Norwegian handball.

After a quarter of an hour of play, it looked like Denmark and France were in the semi-finals.  The score between Germany and Denmark was 7:7, and a draw would do it for the Danes.  In Krakow, Norway did not have much of a say against a French team who was up 7:4 in the opening minutes.

At half time, the scenario had not changed in Wroclaw.  Germany had been in the lead 10:8, but with four straight goals, Denmark had gotten back into the driver´s seat and at the half time buzzer the Scandinavians were still leading by one, 13:12.  More profound changes had taken place in Krakow, where Norway was now heading for the semi-final, having changed their three-goal deficit into a one-goal advantage at 12:11. Three shot attempts with nothing to show for from Nikola Karabatic stood out on the French side.

By the middle of the second half, things were still pointing at Denmark and Norway, joining the exclusive club of the final four teams at EURO 2016.  Denmark was leading 19:18 against Germany while Norway was up 22:19 against France.

Eventually, Germany became the first team clinching semi-final berth, defeating Denmark 25:23 20.  The Danes were leading by two, but were not able to score a single goal for the last seven and a half minutes.  The injury plagued squad of coach Sigurdsson, in turn, scored four goals in a row and booked a very unexpected ticket for the final weekend.  It is the second major championship in succession without a Danish semi-final participation.  This is not something Denmark is used to.

Something else that no one is used to is that Norway’s men show up at the final stage of a major handball tournament.  People may have to get used to that, at least at this European Championship.  As the second half in Krakow progressed, Norway almost completely dominated a disappointing French team, taking a 29:24 win.

With Norway and Germany in the semi-final, their opponents were to be found in the last two matches on Wednesday night. Poland took on Croatia in Krakow, while Spain was playing Russia in Wroclaw.  Out of those four teams, only Russia did not have a chance to advance any further.

After 15 minutes, all of a sudden Denmark and France could still hope for a semi-final ticket after all.  Russia was leading 7:5 against Spain, while Poland was down 5:1 against Croatia.

Spain kept having trouble clinching their semi-final berth, which appeared to be so obvious before their match against Russia.  After 30 minutes of play, coach Torgowanow’s squad was still leading by one, 12:11.  Poland, on the other side, seemed to be on their way out, bringing France back into action, as Croatia was leading 15:10 against the hosts.

By the middle of the second half, Spain was on track, leading 21:17 while Denmark saw the last theoretical chance for semi-final evaporate.

An even more unbelievable scenario unfolded in Krakow with Poland down 28:13 against Croatia.  Backed by goalkeeper Ivan Stevanovic, the Balkan team was no longer boosting the French hopes, but their own, as their lead had extended to a margin that assured the semi-final ticket.

In the end, Spain was the only team among the favorites that lived up to the expectations.  Their opponent in the semi-final will be Croatia, who thrashed Poland 37:23, eventually.  The remaining spot for the final will be determined between the two biggest surprises of the tournament, Norway and Germany.  Making any predictions would be reckless, considering what this tournament has taught us so far.