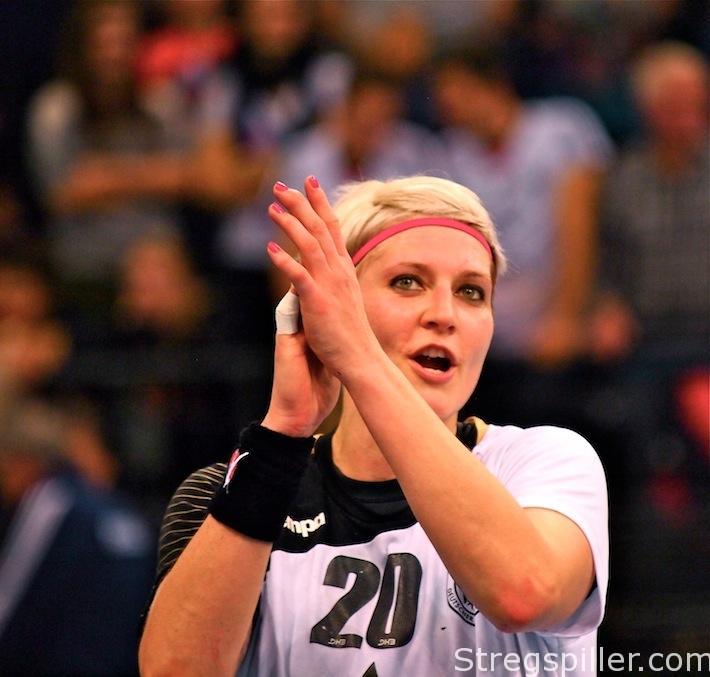 Who Is Anja Althaus?

A somewhat more exhaustive answer is certainly warranted given her exceptional handball career.  Even more important the answer will highlight a very significant difference between the current national women handball team of Germany and their male counterparts.

No question Anja Althaus is one of the most successful German handball players of all time – male or female.  Only Grit Jurack has collected more Champions League trophies during her long but now finished career.  On the men’s side Anja’s accomplishments can easily be compared with the achievements of handball legends like Erhard Wunderlich and “Blacky’ Schwarzer.  All of them have in common that they left Germany at some point in their respective careers to join a world-class club abroad.  Barcelona was the destination for Wunderlich and Schwarzer and the Danish powerhouse of Viborg became the temporary home for Jurack and Althaus.  While Schwarzer was able to lift the Champions League crown jewel once in Barcelona, Althaus raised the same trophy twice with her Viborg teammates in 2009 and 2010 not to mention numerous titles on the national level in Denmark and Germany alike.  Yet most German handball fans do not know much about Althaus or her success story – in fact she is probably better known in Denmark than her home country.  Why is that?

A partial but important answer can be found in the 2nd edition of the well-received new magazine “Handball Time” where three respected followers of  Germany’s handball scene rank 100 of the sport’s most influential individuals.  In all fairness to the authors they openly admit that the ranking is “subjective and does not meet any scientific criteria.”  Nevertheless the list allows for a number of telling observations and sheds light on yet another set of problems surrounding German handball today:

In the perception of “Handball Germany” a female national team – much less one of its most accomplished athletes with respective market(ing) potential – barely exists. It’s that plain and simple.  A token appearance of newly elected DHB vice-president Bob Hanning at the recent European Championship qualification game of Althaus & Co. against Russia in Trier does not change this impression.  It is safe to assume that a similar ranking conducted in Norway, Denmark or Montenegro would not have produced similar results.  Unthinkable that the likes of a Marit Breivik, Jan Pytlick or Katarina Bulatovic would appear as also-rans in even the most subjective of all surveys covering the sport of handball.

All of this disinterest and inertia serves as the backdrop of a women’s 2017 World Championship in Germany.  It almost begs the question why Germany applied in the first place to host the world games?

It is a gross understatement that much needs to be done until then.  Everything needs to be done almost from scratch.  2017 represents a unique chance to put women’s handball on the sports map for good in Germany.  But it seems that someone other than Bob Hanning needs to step up and take the lead.  Vice-President Hanning’s energy will be largely spent on the men’s side.  Can newly elected President Bauer pick up the slack?  Does he want to?  Who else could do it?

Germany’s mainstream TV stations (i.e. ARD and ZDF) have to take responsibility as well and recognize the need to diversify a rather monotonous sports program.  A viewer that pays top EURO’s in TV fees has the right to consume a diverse sports menu – handball, especially women’s handball should be one of the more regular dishes served.  The habitual and overly supplied nourishment of soccer needs to be supplemented with other ingredients as well.  But it takes will and vision at the highest level of media institutions and handball management alike to place women’s handball on the menu.  How it is done can be observed at Norway’s channel TV2 where Harald Bredeli presents 2 hours and 20 minutes of HandballXtra every Wednesday.

Now is the right time.  Handball Germany needs to prepare the groundwork for another “Wintermaerchen” in 2017.  Yes – 2017 for those readers who think of a typo.  The 2017 Women Handball World Championship in Germany should take center-stage in the planning efforts of the DHB.  Don’t let this fantastic opportunity go to waste.  Germany’s handball officials and media representatives alike should ask themselves today:  Who is Anja Althaus?  The honest answer to this question will be given in 2017 – or maybe never at all.