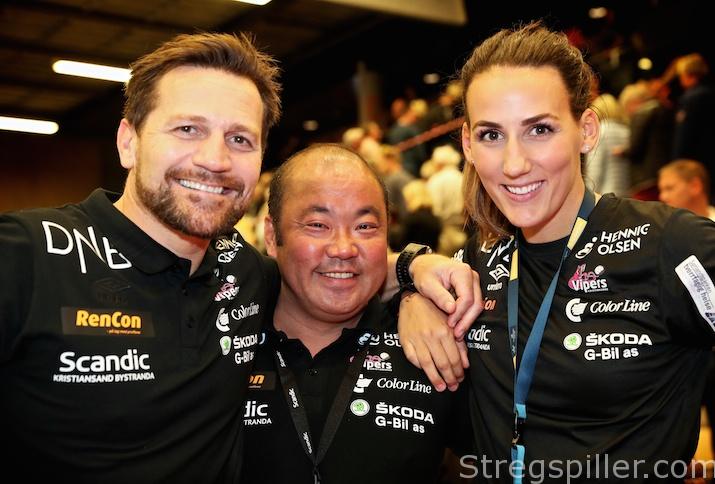 Another easy day at the office

Just as expected, the final of Qualification Group 1 for the Women´s Champions League 2017/18 turned out to be a no contest between Vipers Kristiansand and Podravka Vegeta.

Vipers enjoyed another easy day at the office, winning the final against Podravka by an even bigger margin than the day before in their semi-final against Gomel.

Vipers had the far easier semi-final on Saturday, when they ran over Belarusian champions, HC Gomel by no less than 43:19.

Podravka had a considerably tougher match overcoming Turkish champions Kastamonu Belediyesi, but only in the very last minutes of the game, when they succeeded 21:17.

Vipers had yet another advantage on their side, as they played the first match on Saturday and therefore had more time to recuperate.

Already yesterday, I congratulated Vipers to their first Champions League berth in club history, but of course, I would like to repeat the well-wishes one more time.   Yet, the task on hand this Sunday evening at Kristiansand’s “Aquarama” was just as easy as their semi-final against Gomel.

And just as expected, Podravka were no match for Norway’s new top team.

Actually, the Croatian champions were able to keep the distance to one or two goals for the first eight minutes but it went all downhill from there.

At the score of 5:4, Vipers showed no mercy  any more and the first 30 minutes looked very much like the opening half of their semi-final victory against Gomel.

Kristiansand’s defense had absolutely no trouble with Podravka’s attack, and several shots of the Croatian team were so weak that Katrine Lunde had no problems catching them.

Add to it a significant number of technical mistakes and it explains why Vipers could take advantage of so many, easy fast break goals.

We also saw the surprising comeback of Kristine Lunde-Borgersen who sat out the semi-final due to a minor injury.

Within her first few minutes on the court, she managed to get a yellow card, scored a goal and made one technical mistake.

Still, she appears to be the better solution as playmaker during Marta Tomac´s injury break, compared to Emilie Hegh Arntzen. Arntzen is considerably more effective as left back.

Considering Vipers´ huge lead after 30 minutes, it was no wonder that the intensity of the game dropped in the second half.

Vipers in particular, lacked a bit of concentration in making their shots.  Still, the team was focused enough to score another 20 goals, while maintaining their intensity in defense.

There were more spectators in the hall – 1,648 – compared to Saturday, and even though tension and excitement were missing, the audience created a fine atmosphere.

Vipers can prepare for Buducnost, Metz and Bietigheim in Group D of the Champions League and Podravka can look forward to entering the EHF Cup qualifiers in the third round.

Personally, I am looking forward to watching Vipers on the biggest stage of all – the EHF Champions League.

Before the final match of the day, HC Gomel secured a third place through a 29:28 win against Kastamonu Belediyesi.

Just as expected, Thüringer HC made use of their home court advantage and proceeded to the Champions League group phase as well.

Last season´s runners-up in the Bundesliga won their group in convincing style (33:24) against Swedish champions Höör.  THC decided the matter already at half time, when they were leading comfortably at 16:9.

The German club will enter Group C of the Champions League, where they will be meeting Vardar Skopje, FTC Budapest and Larvik.

Höör will continue in the EHF Cup.