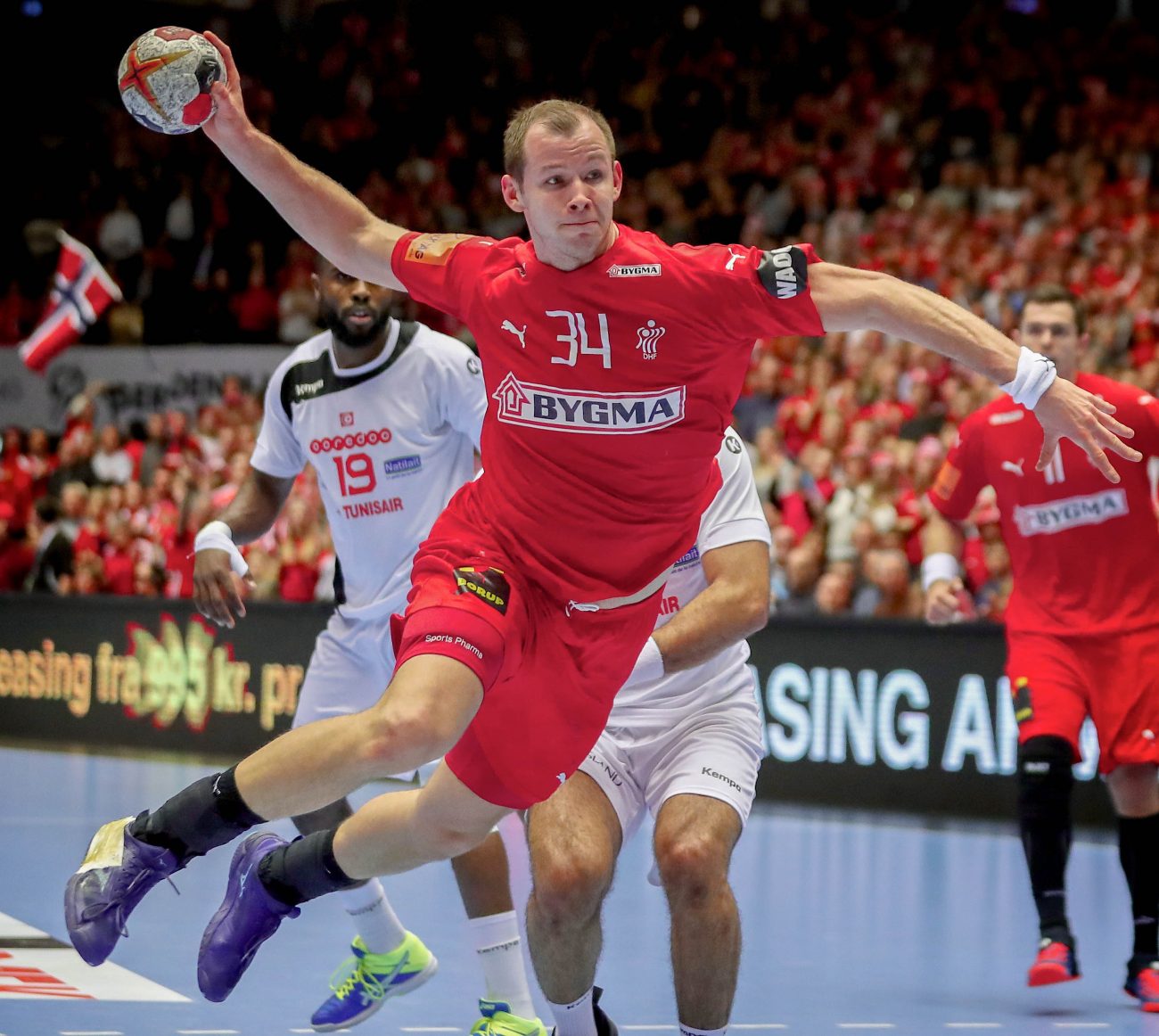 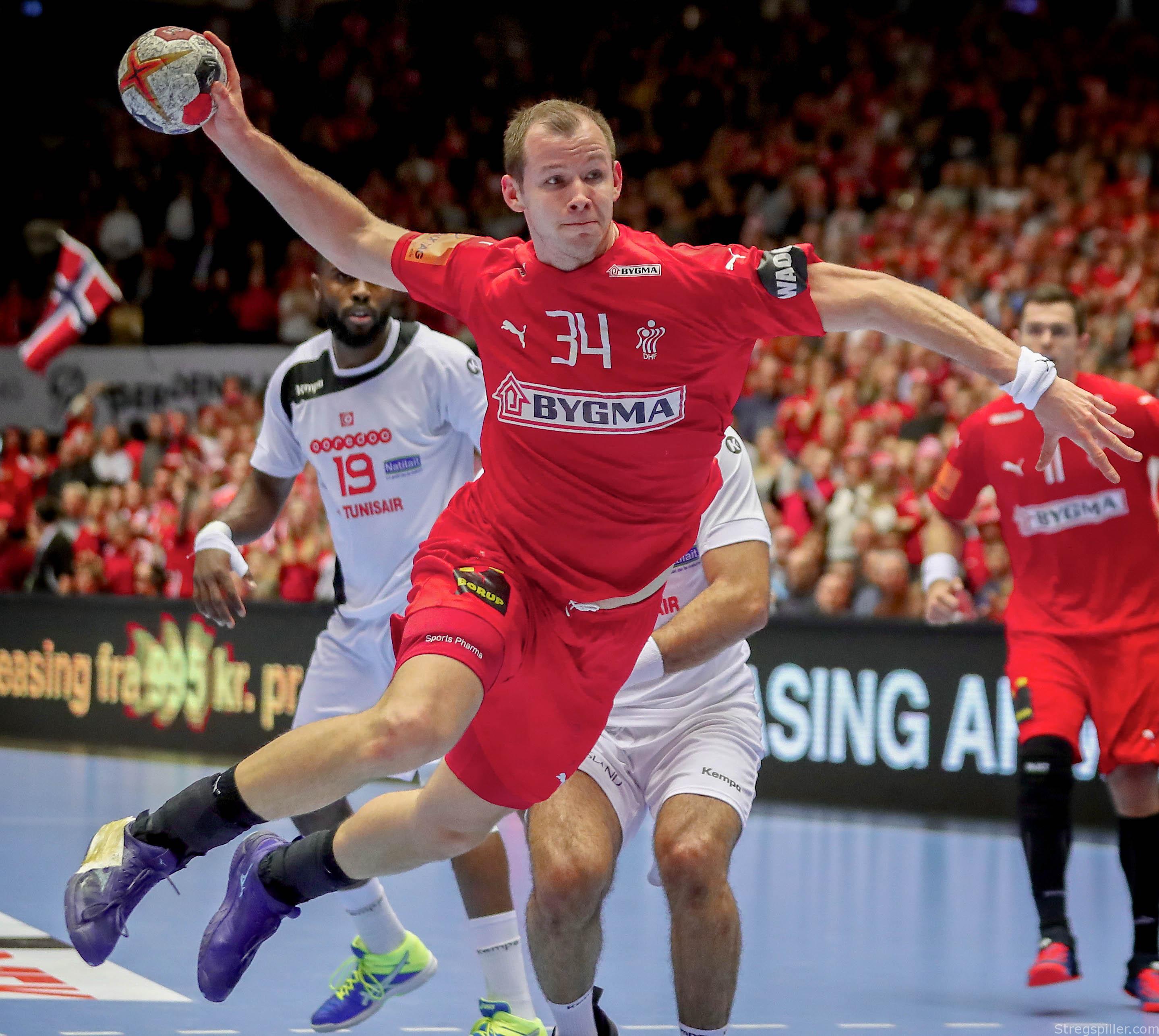 Another game, another XXL win

MATCH REVIEW – After trashing Chile by 23 goals in the opening match, Denmark took another double digit win, against Tunisia in the host´s first match, in Herning’s Boxen Arena.

Tunisia never stood a chance against a highly motivated Danish team who never looked back after a 7:0 run, right at the start of the game.

Tunisia, on the other hand, ran out of power and ideas in the last fifteen minutes against Norway and recorded a much bigger loss than necessary (34:24).

On top of all, the Danes enjoyed one day of extra rest, after having played their opening game on Thursday already, while Tunisia had less than 22 hours to prepare for the encounter with the host.

Denmark´s coach, Nikolaj Jacobsen, made the first of his three available substitutions already before their second match. Right wing, Hans Lindberg, did not recover from the injury he sustained against Chile and the Füchse Berlin veteran was replaced by Johan Hansen (Bjerringbro-Silkeborg).

The first World Championship match in the history between Denmark and Tunisia ended with a Danish 27:6 win in Sweden, in 1967, in a game where Tunisia was on the receiving end of seven suspensions.

On Saturday night, Denmark did not win by 21 goals, but kept the margin of difference at 14. This time, it was Denmark who received most of the penalties, but such setbacks did not keep them from winning the game.

Denmark dominated the match in more ways than the half time result indicated, and the Danish lead would have been considerably larger, if Tunisia hadn’t got some “help” from the referees in the late stages of the first half.

It took Tunisia nine minutes to score their first goal, at that point, Denmark were in front 7:0!

Nothing seemed to work, not even playing seven-against-six.

Tunisia were just helpless against a Danish team that carried on no matter who was on the pitch.

And in goal, Niklas Landin performed miracles even though Denmark’s defense formation was not at its best as the shortcomings were masked by a tremendous effort on the other side of the court. The hosts were unstoppable and went on to built a 12-goal lead (14:2) and the gap remained the same until four “two-minute” suspensions allowed Tunisia to cut the deficit to nine goals, right before the half time buzzer.

The rhythm of the game was lost due to the flood of suspensions and the Danes took a breather, while Tunisia kept scoring before Mikkel Hansen & Co. tightened the grip once again.

By minute 45 or there about, Denmark´s coach, Nikolaj Jacobsen, began rotating his bench. Most of his starters saw their workday cut short – Mikkel Hansen, Rasmus Lauge, Lasse Svan and René Toft took the rest of the match off.

The aforementioned Johan Hansen made his championship debut on right wing, and Morten Olsen took over the playmaker function.  Much to the joy of the 15.000 in attendance, such substitutions did not turn into a handicap and for Tunisia it went all downhill from there.

“We played exactly as we had planned to. We got off to a very good start and we were able to push through from there.

“It’s really impossible to find anything to be disappointed about, right now – I think!”

“Our performance was catastrophic as this was probably our worst match of the season.

“Especially, the first few minutes were terrible. As the game progressed, we improved a bit, but we never managed to get any closer than eight goals.

“We were simply not focused enough. Now, it’s a question of redirecting our concentration to the three remaining games in this group.”

At some point the Slovenian referees, Lah and Sok, appeared to feel sorry for one team and that’s really bad.

All of a sudden, the Danes were on the receiving end of a series of mysterious suspensions and while some of their other calls went against Tunisia, the decisions were difficult to understand.

Fortunately, they did not continue this way, but their line was still hard to figure out – for players on both sides.

It cannot be called a coincidence any longer. After two convincing victories, one has to be impressed by Denmark.

Of course, the opposition has been modest on both occasions, but the kind of handball the hosts have put on display deserves respect and expectations are on the rise.

However, we will only see what Denmark’s team is truly made of, when they’ll be tested against a considerably stronger squad. For sure, this will not happen on Monday, when they’ll meet Saudi Arabia as this game will result in yet another double digit win for the Danish team.

Tunisia, in turn, will have to see what they can do against Chile.