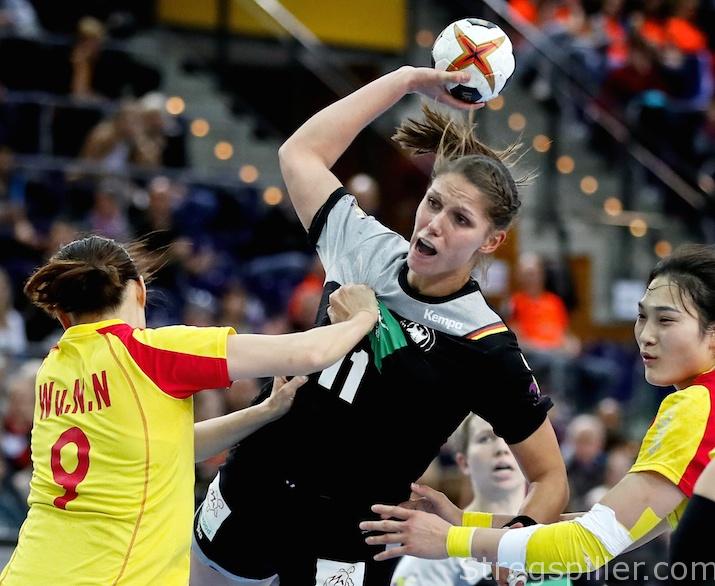 Another thriller in Leipzig

Only half of all the teams participating at World Cup 2017, in Germany – the teams and Group C and D – were on the floor on Wednesday.

Serbia and The Netherlands shared points in a thrilling match on a day that saw three more teams qualify for the Round of Last 16.

Serbia were on five points after their tie against Germany, on Tuesday evening, while the Netherlands had one point less because of their opening defeat against South Korea.

The draw versus Team Germany was enough to earn the Serbs their ticket to the Round of Last 16, and after Cameroon´s loss against South Korea earlier that day, The Netherlands were through as well.

Considering what has been going on in Group C so far, it’s hard to say, which ranking among the first four in Group D would be preferable.

Once again, a key question was if Andrea Lekic would be playing for Serbia, and what impact she would have on the game.

For the second day in succession Serbia drew after a tense and exciting match.

And just like the 22:22 in the game against the German host, the Serbs were en route to another victory, before Nycke Groot robbed them a point in the dying seconds.

The fact that Serbia should have been awarded a penalty in their last attack will be no consolation to them. The Dutch will look forward to yet another opportunity, to win the group.

All in all, however, the draw was the correct outcome in a match between two strong teams.

No – Lekic did not play from the start. Still, the Serbs took the initiative and were sitting on a one or two goal lead during the first 20 minutes of the first half. The offense of both teams definitely enjoyed better working conditions – Yvette Broch (Netherlands) and Marina Dimitrovic (Serbia) did most of the damage.

In the 20th minute, Lekic came on, and seven minutes later, she scored her first goal in the tournament.

In the meantime, The Netherlands were able to benefit from their speed and took the lead a couple of times, before the first half ended in a stand-off.

The Netherlands had more time to rest after their game on the previous day than the Serbs did, furthermore, they did not have to invest as many physical resources in their match against Cameroon.

Therefore, one would have expected the Dutch to have that little bit extra in the tank today, but the opposite seemed to be the case.

Serbia were in the driver´s seat for the better part of the second half and were leading by three goals several times. A strong performance of Marija Colic in Serbia’s goal had much to do with it.

In the end, however, The Netherlands managed to catch up, and after the Serbs were denied of a penalty shot, Nycke Groot tied the game with a powerful jump shot in the very last seconds.

Still, Dragana Cvijic did have time to send the ball into an empty Dutch net from the center court, but the goal wasn’t given, as Cvijic was not standing still when she took the shot.

Serbia are now on six points, The Netherlands on five and everything is still wide open in the group, where the Dutch will be meeting Germany on the last match day of the group phase, while South Korea will battle it out against Serbia.

Other Matches in Group D

Just as expected, Korea had absolutely no trouble clinching the Round of Last 16 berth, while Cameroon will move on to the Presidents Cup.

Yes, 24:9 actually was the final result

In the lowest scoring match of the competition so far, Germany booked a big and easy win, although 24 goals against China is not exactly an impressive score over 60 minutes. But, keeping China below 10 goals also speaks for itself.

Germany are now on top of Group D with seven points, followed by Serbia (6), South Korea (6) and The Netherlands (5).

Those are also the four teams who proceed to the Last 16 from this group.

Russia continued their march towards the group win, but in the match against Japan they showed their poorest performance in the tournament, so far. They certainly had their problems battling a Japanese team that was unimpressed by the reigning Olympic champion.

The Russians took control early, leading 8:5 by the middle of the first half, but five goals in a row by Japan changed the score into a10:8 lead of their own.

Russia soon had the upper hand again, but they were not able to shake off Japan.  Even when Russia got up by five goals (20:15 and 21:16), Japan did not cave. Playing seven-against-six, they came back and in the last 30 seconds, Japan even had control of the ball. But when an attackers foul was awarded against them, the match was decided in favor of Russia.

The Montenegrin win was not really as clear and convincing as the final digits indicated.

Actually, Montenegro were in trouble several times, particularly in the first half, when Tunisia were in the lead a few times.

The North Africans were also able to follow their opponents in the first part of the second half, but in the last 15 minutes of the match, Montenegro ran away.

Despite being on four points, Montenegro can still not feel secure to reach the Round of Last 16 in this very evenly matched group, where Tunisia is the only team which can no longer proceed to the knockout phase.

With their best performance at this World Championship, Brazil were leading most of the first half, a couple of times even by three goals.

However, the Danes came back after the half, and thanks to a world class performance of Sandra Toft in goal, they deserved to win and earned the ticket to the Round of Last 16, while Brazil will have their fate decided on the very last match day of the group phase.