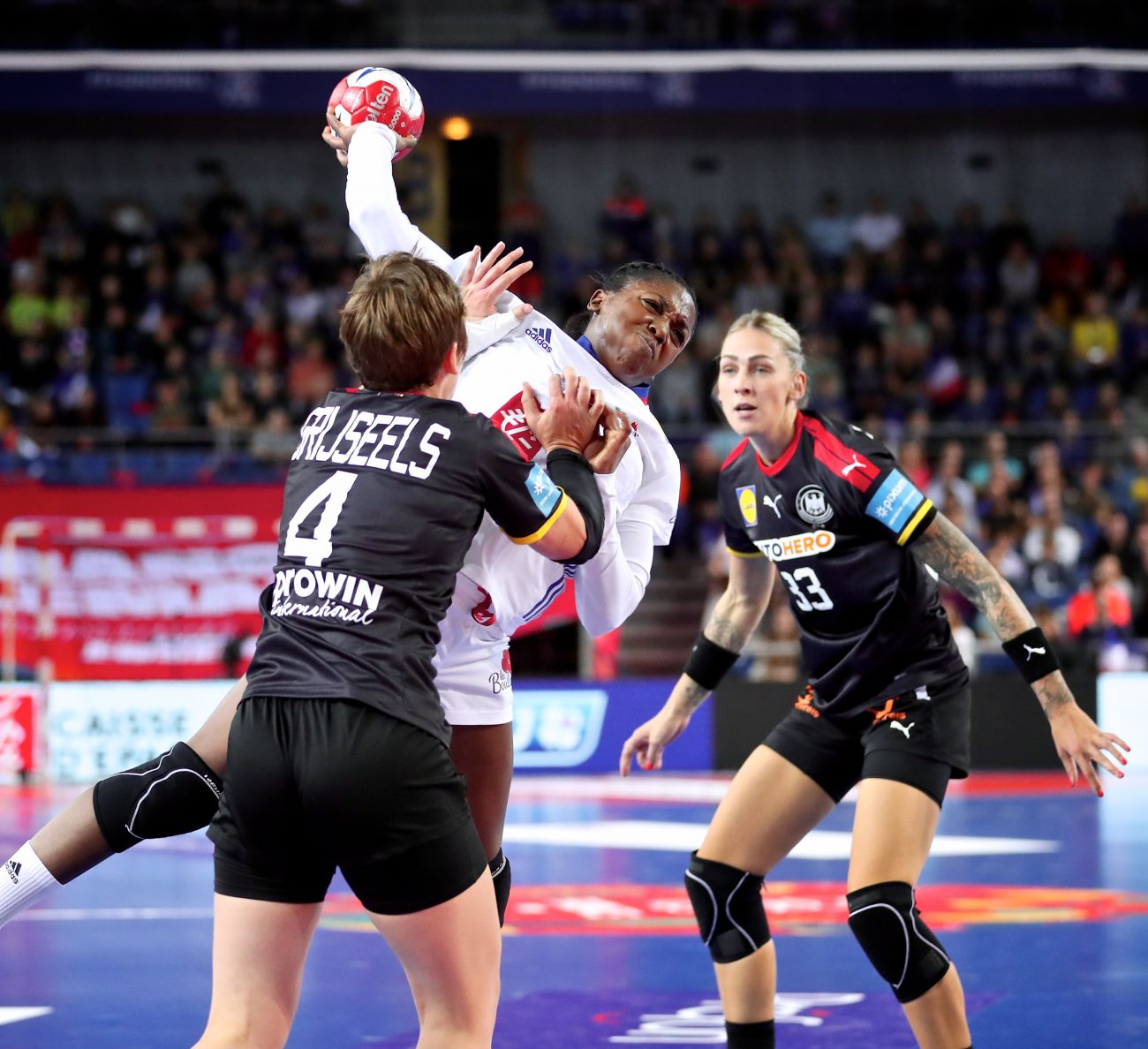 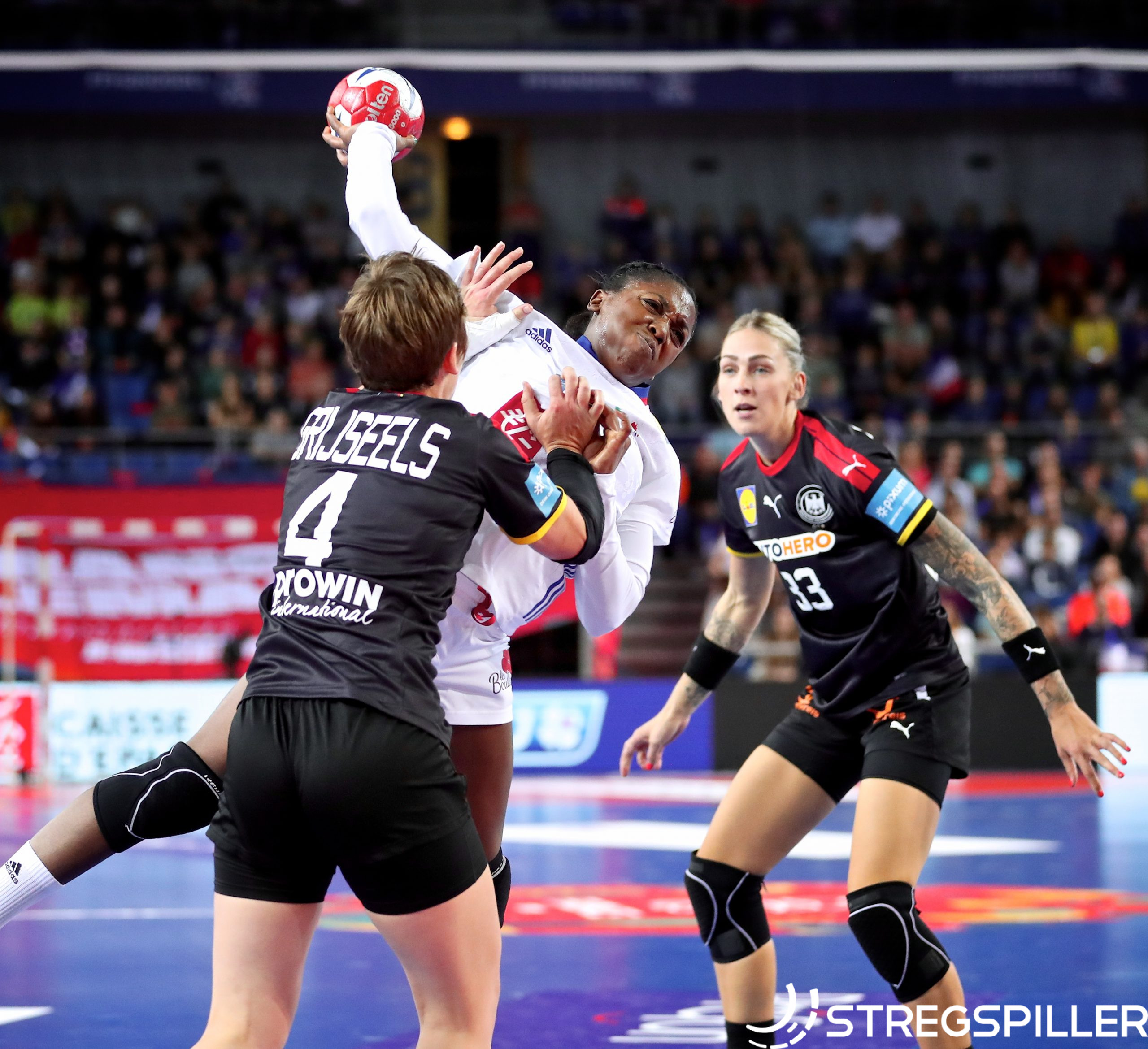 The EHF EURO 2022 is right around the corner (4-20 of November in Slovenia, North Macedonia, Montenegro) and time is preciously short to prepare for the last handball highlight of the year.

This past weekend, Germany did so under the auspices of the new coach, Markus Gaugisch, in two games against the reigning Olympic champions from France, a team that is in the middle of a different kind of transition.

Some of the key players of the “Golden Generation” (World-, European, and Olympic gold medal winners) have retired from the national squad or handball all together (Siraba Dembele Pavlovic, Alexandra Lacrabere, Amandine Leynaud), but Grace Zaadi, Beatrice Edwige, Laura Flippes, Cleopatre Darleux and Estelle Nze Minko still form the backbone of “Les Bleus”.

While the sports rivalry between the two countries is full of memorable moments, in women’s handball the goalposts have shifted considerably over the past two decades. The team led by head coach Olivier Krumbholz  developed into one of the dominant forces in handball and the success of the past five years in particular speak for themselves.

In contrast, Germany’s best days in women’s handball date all the way back to the mid 90’s and the last precious medal win at a major championship occurred in 2007, when Grit Jurack’s 12 goals in the match against Romania (36:35 ET) made the difference and secured third place at the World Cup in France.

More recently the squad led by the two team captains, Alina Grijseels and Emily Boelk, assumed the role of challenger, but without much success . The premature exit at the 2017  World Cup on home soil under coach Michael Biegler, followed the era with Henk Groener at the helm.  A re-energized team produced a 10th rank at EURO 2018, ended up  in 8th place at the 2019 World Cup (missing the Tokyo Olympics), ranked 7th at EURO 2020 and generated the same result at last year’s World championship in Spain.

While the statistic speaks for itself, better outcomes often hinged on one game or even one goal that would have made the difference. After the match, in Metz, on Friday, French center-back, Grace Zaadi, acknowledged the incremental improvements of Team Germany over the years.

“Germany are a solid team, a little undervalued, knocking on the door of the top 4.”

While Grijseels & Co. have made inroads, the difference between the two teams still appears to be considerable, especially when taken into account the significant success of the French squad since 2017 (World champions 2017, European champions 2018 and Olympic champions in 2021) and the experience players gain when they compete against the very best on a monthly basis.

The majority of the current French roster (12 players) face tough competition in the EHF Champions League, whereas only six players on the German side practice their skills at the highest level in club handball.

Yet, the performance gap between the two squads could be smaller than the results of the two recent test games suggest.  While France maybe better equipped to handle the pressure of the occasion (i.e. EURO 2022), Germany could relish in the role of the under dog and feed off their ability to come back in any game not matter how steep the deficit may be.

The second match against the French at Palais des Sport Jean Weille, serves as case in point. Halfway through the game the crew of coach Gaugisch looked like the sure loser of the affair in Nancy, but then Germany went on a 9-2 run and by minute 45 they were in the lead by two goals (22:20).

Getting ready for crunch time

Yes – at times Germany did lack stability on both ends of the court, they missed the powerful shooting of Alicia Stolle from the right-back position and the transition game still needs improvement.

On the flip side, all wing players made meaningful contributions. The outstanding performance on Friday night, in Metz, when Doell, Stockschlaeder, Behrend and Schirmer combined for 13 goals was followed up with precision scoring two days later in Nancy and Katharina Filter stepped up between the goalposts, when big saves were needed.

Now the danger is in taking a breath, in stopping to admire the view and in dwelling on the magnitude of what the team might achieve after the two close results against France.  If Gaugisch and his staff can eliminate some of the shortcomings between now and throw-off against Poland on November 5, his team could generate pleasant surprises during EURO 2022.

As Germany approaches the year-ending tournament as a hunter in their quest for a qualification spot for the 2024 Paris Olympics, France aim to rekindle its winning attitude as right-wing, Alicia Toublanc explained after the match in Metz.

“It’s important to cultivate this desire to win, it’s the DNA of this team”, while head coach, Krumbholz, acknowledged that “we are not yet at our best level.”

A sentiment echoed by line-player, Beatrice Edwige, on Sunday after the last second win of “Les Bleus”.

“I am a little bit concerned. At this point of the preparations, we are not yet the machine that’s crushing our opponents.  We don’t have the energy that we should have.”

Whereas Grace Zaadi focused on the center-back position and the sudden void Meline Nocandy left after her knee injury.

“We have no time to cry – as a group we have to step up and accept responsibility. Tamara Horaceck will assume a bigger role in the team and help us.

“No doubt it will be more difficult without Meline, but I hope we can split the time on the court. It’s an intense competition with up to eight games ahead of us and it will require a lot of energy.

“We do have the skills, but we need to reorganize as a team and I am confident we will do just that.”

Zaadi, who currently plays her club handball at CSM Bucuresti accepts to be ranked among the favorites at the EHF EURO 2022, but cautions that past achievements do not guarantee future outcomes.

“Of course we had some successful results in the past and on the surface France looks like a favorite, but keep in mind that we only have three more games left to prepare for the European championship.

“We are aware that everybody can beat everybody and anything is possible – it’s very difficult, but I am convinced that we will focus and rebuild our game like we did in the past.”

Approaching EURO 2022 – a matter of perspective.