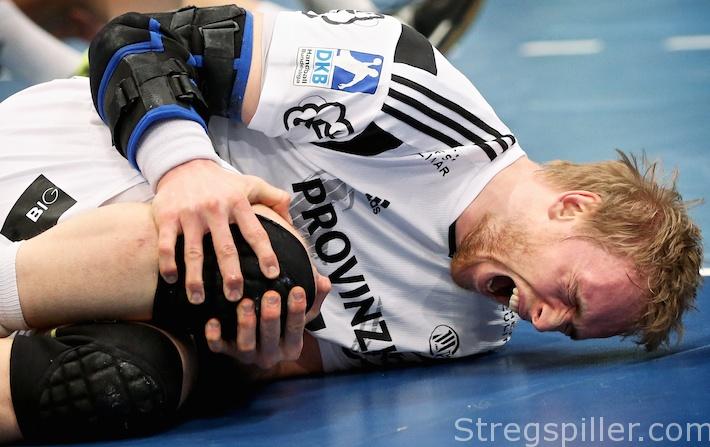 At the opponent’s mercy

COMMENT – The participation of Danish line player René Toft Hansen at the World Cup in France has been thrown into uncertainty after yet another dubious decision by the IFH.  The ruling leaves it up to Denmark´s opponents to decide if he can play with elbow protection or not.

René Toft Hansen has certainly drawn headlines before having played one single minute at this World Championship.

First, it was his decision not to speak to the media, which drew attention.

I have questioned his decision in an earlier article, but this time he deserves all my sympathy, while the criticism must be directed towards the International Handball Federation, in particular.

You probably know the circumstances, by now.  24 hours before Denmark´s first match against Argentina, the IHF refused to accept Toft Hansen´s elbow protection, because it might cause harm to his opponents.

Later on, the IHF backpedaled, so he could wear his elbow protection with the caveat that Denmark´s opponents had to accept it.

While these lines are being written, Egypt Qatar and Bahrain have all accepted Hansen´s elbow protector, while I cannot imagine that Sweden will not accept it as well.  In the meantime they did.

This way, Toft Hansen is assured of seeing time on the court in preliminary group games, but what a pressure the IHF put on the medical staff of the other teams.  How easy could it be to refuse such elbow protection for tactical reasons?

While René Toft Hansen´s absence meant absolutely nothing to the Danish team in their 33:22 opening win against Argentina, his presence will be absolutely crucial during the knockout rounds.

He would not be missed as badly on the offensive end, where his younger brother Henrik could easily cover the position together with Jesper Nøddesbo.  In defense, however, Toft will be a key player against any opponent from the top 10 in the world.

Of course, the matter should have never reached this point.

First of all, the timing is terrible.  Making such decision 24 hours before the first match of a World Championship probably only happens in handball.  Yet, Denmark’s Handball Federation has to be blamed as well, at least partially.

They knew for a month that this issue might become a problem, and they did not have a Plan B, when the particular elbow cover was finally rejected.

The day before the IHF made their decision, representatives of the Danish federation told Danish journalists that there would be no problem at all!

As we all know now, there was a problem.  The IHF found the elbow spleen (made of metal ed.) could be dangerous to the opponents of Toft.

Apparently, he does not want to protect René Toft Hansen – who is a player as well.  All of it raises the question if the IHF is overly protective or just a bureaucratic apparatus out of touch with the realities on a handball court?  The latter seems to be the case.

What harm could this particular elbow protector actually do to an opponent, even if René Toft Hansen would swing his right elbow a bit high?

We are talking about a small metal spleen, wrapped in nylon and further padded with cotton. In fact, such padded elbow protector would probably cause less damage rather than the arm remaining uncovered.

Hassan Moustafa is an educated medical doctor himself – at least he studied medicine in Leipzig many years ago.  He should have been able to make the decision about the spleen himself, instead of delegating his responsibilities to Denmark´s opponents!

Apart from all of it the ruling is inconsequent.  Knee and ankle protectors also contain metal, but the devices are permitted – provided their color matches the color of the player’s socks!  Elbow protectors are excluded, and so are medical headbands, as some will remember.

Sadly, it does not stop here

Sadly, if does not stop here.  We have had similar cases in the near past, and they all created precedent.

Most of us still remember the case about the head protection of Denmark’s left wing, Maria Fisker, at the Women´s European Championship, back in December.

On that occasion, the EHF was under pressure, stating that they were only reinforcing rules issued by the IHF.  There appears to be no doubt that the EHF will adopt this nonsensical measure as well.

Meaning that all of THW Kiel´s future opponents in the Champions League will have to decide if they want to accept René Toft Hansen´s elbow protector or not.  Assuming that he will not compete without it, the decision will be taken by the medical staff of Kiel´s opponent at the time and decide if Toft will play or watch from the stands.

Exceptional working conditions for a coach, having to prepare for a match without knowing if he can make use of one of his key players or not.  “Elbow gate” may threaten René Toft Hansen´s entire career.  For now, it certainly throws it up in the air.

Sometime I wish, I wouldn’t love handball so much as certain people are doing their “best” to ruin this wonderful sport.