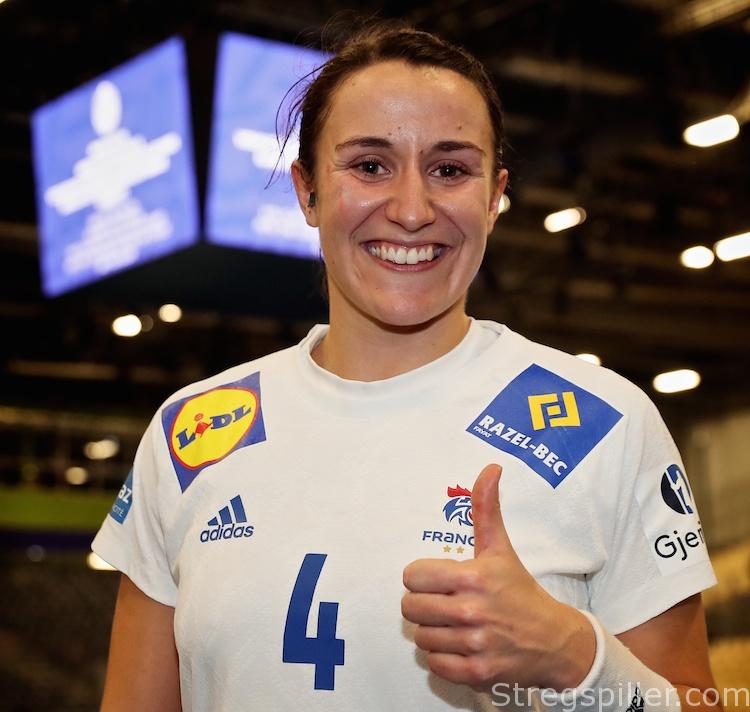 MATCH REVIEW – It took France nearly 30m minutes to fight down Serbia, but once “Les Bleues” got the upper hand, they were unstoppable and Serbia without a chance, in the last main round match, in Nantes.

*Serbia still harbored some hope to reach the match for fifth place, possibly providing access to the Olympic qualifiers, but it would take a win against the host and World champions.

*France needed at least a draw to be assured of reaching the semi-final, as Sweden´s earlier 39:30 win against Russia had put the team of Oliver Krumbholz´s under some pressure.

Serbia deserve some credit for hanging with France for most of the first half – the Balkan nation even led a few times.  However, they did not stand a chance, when France turned up the pace, while cruising into the semi-final.

In the opening phase of the match, both teams neglected their defense formations, especially Serbian line player, Dragana Cvijic, caused France problems, while the two squads traded goals. It was not until Manon Houette made it 10:8 for France in the 16th minute that any team was able to build a meaningful safety margin.

However, those who thought that this was the start to French dominance soon had to think twice.

Serbia came back and created an advantage of their own (13:12 and 14:13), courtesy of a stellar performance from goalkeeper, Marija Colic.

But, a fantastic finish and five unanswered goals provided France with a rather reassuring four-goal, half-time lead.

After a convincing end to the first half, France continued where they left off before the break.

Very quickly, France added two more goals in the second half, increasing their lead to six. At this point, it was clear that Serbia would not find a way to come back into the game.

France kept running and the only surprise was why Serbia´s coach, Ljubomir Obradovic, waited to call for time out until his squad was trailing by nine goals (25:16), nine minutes into the half?

The French handball show went on, pretty much uninterrupted, as the hosts built a 10-goal lead (26:16), while maintaining the margin of difference all the way to the end.

7.406 spectators at XXL Arena, in Nantes, created a fantastic atmosphere and provided tremendous support for the home team – just the way a home crowd should be.

“I am very content with the way we won the match tonight.

“The first half was really difficult for us, but we never had any fear or doubt in our abilities – now, we are really looking forward to the semi-final.”

“We lost to a better team – I am still a bit disappointed that we could not do better.

“Actually, we would have liked to finish this tournament in a better way.”

France can start preparing for a semi-final against Romania, in Paris, on Friday.

However, the match could turn into a rather easy task for the team of head coach, Olivier Krumbholz, after Romanian star player, Cristina Neagu, had to be carried off the field with a torn anterior cruciate ligament. Without her, Romania lost their last main round game 31:29 to Hungary.

For Serbia the tournament came to an end and will travel home.