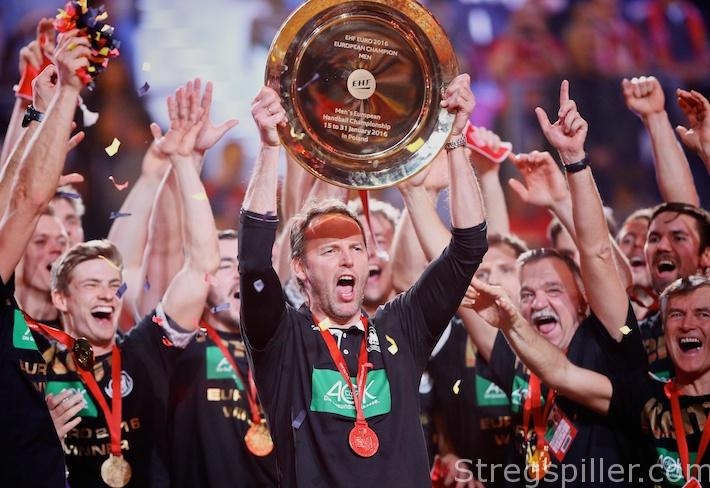 If you were one of two guys on the planet that believed in the German team to win the 2016 EHF Euro in Poland, congratulations. However, I highly doubt it.  The other one, Andreas Wolff did his part in making sure the “Bad Boys”, named after the NBA’s legendary Detroit Pistons team of the late 1980’s, would come up with a stunning title in January.  The successful mission had written one name all over it – Dagur Sigurdsson.

In 2014, the Icelandic coach had taken over from unfortunate Martin Heuberger, who had completed his very own triple of sorts by missing all three major tournaments at least once during his tenure.  Within months, Sigurdsson had changed the mindset of his players.  After qualifying for the World Championship in Qatar, thanks to a wild card, a younger, less experienced team showed first signs of improvement.

Sigurdsson’s biggest advantage is probably his authority, something Heuberger totally lacked.  He really doesn’t care about what people say, he’s doing his thing and he’s doing it quite well.  In Poland he was managing without four core players – Uwe Gensheimer, Patrick Wiencek, Paul Drux and Patrick Groetzki.  Others, like right-wing Tobias Reichmann or left-back Steffen Fäth, took over and thus made it extremely hard for the coach to make a choice on who will make the team for Brazil.  Moreover, he stunned all experts by leaving out veteran goalkeeper Carsten Lichtlein.

No other coach had such a pool of top players to choose from.  But then, injuries didn’t allow him to take the players he wanted to. Steffen Weinhold, who led the team in Poland during the European championship, will travel to Brazil, but probably won’t recover in time to hit the court.  Fäth, who played brilliantly in January, got called up as the 15th player, but is suffering from a broken hand.

Guys like line-player Jannik Kohlbacher and Erik Schmidt had to be left off the team – a decision that has hurt Sigurdsson dramatically.  Kohlbacher has a totally different style to offer, while Schmidt brings character and size to the game.  This time Sigurdsson will rely on Patrick Wiencek and Hendrik Pekeler as his primary pivots – life could be worse.

Germany also offers an almost unique quality when it comes to the starting wing players.  While the skills of Uwe Gensheimer are known for years, Tobias Reichmann played the tournament of his life in his part-time homeland of Poland, even making the All-Star team.

Last but not least there is Andreas Wolff – if he can find his January form, he might be the best in the business.  Also, the German defense, led by stalwart Finn Lemke, is one of the best.

If there is a “weak” spot – Germany may lack a bit of firepower from the playmaker position.  Martin Strobel is a fantastic playmaker – more in the sense of basketball greats like John Stockton or Jason Kidd, rather than Russell Westbrook or Derrick Rose.  For those of you who don’t follow the NBA, he likes to assist whenever he can.

Steffen Fäth can assume this role, but he is out with an injury.  I’m absolutely sure, though, that he will be activated come the knock-out stage.  He should and will make a huge difference with the self-confidence he gained last season.

Can “Bad Boys” become “Golden Boys”?  It’s not impossible, but it seems unlikely.  The absence of Weinhold is a huge blow and the fact that it’s the first time at the Olympic games for all players on the roster, doesn’t make it more likely.  But if the team wins the first group match against Sweden and can avoid both France and especially Croatia – a squad that loves to play against Germany – in the quarterfinal, than the semis should be a realistic goal.  At the moment I’d bet my money on the “Bronze Boys”.