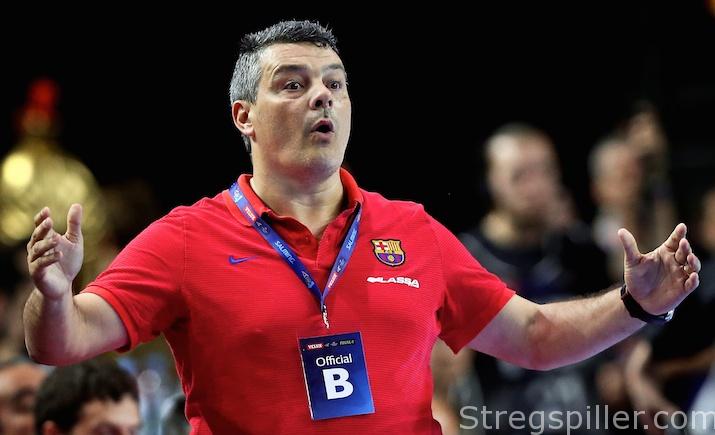 PREVIEW: Historically, FC Barcelona – or Barca Lassa, as their handball team is called these days – enjoyed the upper hand against HC Vardar Skopje.

Until now, the Catalonian powerhouse has amassed a total of 21 points in their Champions League matches against Vardar – can the Macedonian champion reverse course, when the two giants of Group A meet at Jane Sandanski arena, on Sunday?

Ten wins, one draw and only two victories for Vardar – history certainly is not on the side of the team from Skopje before the top match in Group A.

At first sight, it seems to be a fight between Vardar´s home strength and a very stable and compact squad from Barcelona, but let’s take a closer look.

The match will mark the 14th encounter between the two teams in the history of the Champions League.

So far, the record favors Barca by no small margin but one of Vardar’s two victories stands out.  It all happened on June 3, 2017, at Cologne’s Lanxess Arena, when Vardar won the semi-final 26:25 of the FINAL4, booking the ticket for the final match, which the debutants went on to win.

Barca’s second goal on Sunday will be the club’s number 400 in all the matches against Vardar, who in turn will have to score 26 to reach a total of 350 goals in their games against the Catalonians.

Vardar are still missing goalkeeper, Daniel Gjorgjeski, and left back, Sergei Gorbok, while Barca’s coach, Xavi Pascual, is expected to have his entire roster at his disposal.

The two squads will enter the court at Jane Sandanski arena with 10 points each after six matches and both teams come off fresh wins in the previous round of the 2018/19 VELUX EHF Champions League.

Barca won 31:27 at home against Kielce, while Vardar just needed 30 minutes to crush Meshkov Brest 30:23, a week ago.

After the initial loss, Barca won their last five Champions League matches, while Vardar suffered their only defeat in Kielce (31:27).

In the week leading up to the clash in Macedonia, neither team had any problems disposing of their respective opponents. Vardar beat RK Nexe 31:26 in the SEHA League, while Barca defeated Spain’s number five, La Rioja 45:31, at home.

Neither team will have to fear for their ticket to the knockout phase, but the match is crucial in terms of winning the group, and skipping the Round of Last 16.

Not that any of these two teams are under any particular physical strain in their respective national leagues, but who wouldn’t like to take two weekends off?

Rhein-Neckar Löwen, also on 10 points, but with a match more and Kielce (8 points) are the closest contenders.

Lately, however, the performance of the big Serb´s has dropped a bit, but Algerian Ghedbane, who is filling in for the injured Gjorgjeski, has done rather well when given the chance.

Still, Vardar’s duo is surpassed by the likes of Perez de Vargas and Danish newcomer Møller.

There are not many right wingers who are more complete as a player than Ivan Cupic, especially, when considering his speed and experience. Shiskarev certainly isn’t a newbie, but lately he has remained in Cupic’s shadow.

Aleix Gomez has advanced to Barca new number one, but veteran, Victor Tomas, cannot be ruled out. The two Spaniards provide Barca with a narrow edge.

Vardar are not getting enough benefit from Kristopan´s 215 cm and 135 kg. He is big and strong, but he does not really function with the moves of playmaker, Stas Skube.

Yet, Kiselev remains on the bench for most of the time – if you ask me Vardar are not getting the most out of their physically strong, right back, duo.

Kristopans and Kiselev’s 22 goals in total do not compare to the 40, Mem and Dolenec have scored, thus far.

Is it possible? It appears that Skube became even better after he joined Vardar from Pick Szeged. His speed and versatility certainly more than compensate for his height (179 cm).

Karacic is almost as valuable on the left back position as he is in the center, but the arrival of Christian Dissinger has allowed him to function as playmaker, when Skube needs a break.

Palmarsson may not be as dominant as he once was while playing for Veszprém, but he still is a fantastic playmaker, with Entrerrios serving as an experienced back up.

Dissinger´s arrival from THW Kiel has provided head coach Garcia Parrondo an extra option, and there is every reason to believe that Dissinger will be a reinforcement for Vardar, once he is fully integrated in the team – and if he stays healthy, of course.

N´guessan is a fantastic left back, tall, powerful, great shot, but he is a bit inconsistent, for my taste.

His partner, Lasse Andersson was widely considered as one of Europe’s greatest talents a couple of years ago, but two consecutive anterior cruciate ligament injuries, have slowed his development, and he still is nowhere near his former level.

Dibirov and Mortensen are two of the most entertaining left wings to watch – period. And because of their personal success, they do not leave much court time for any other player covering the position.

Dibirov and Mortensen seem to be evenly matched. Mortensen may be a bit more effective when in attack, while Dibirov plays an important role as the advanced player in Vardar´s 5-1 defense formation, allowing him to make crucial steals.

What a treat for the crowd, considering the exceptional talents of the five line players. Alright, not all of them are in their best form right now, but they will provide some great game action.

Advantage: Yet, another draw.

Promoted from assistant coach of Vardar’s women´s team, to head coach of the men’s squad, looks like a bold management decision, but so far, Garcia Parrondo, once an outstanding right winger himself, has proven all skeptics wrong.

What he has achieved with a diminished Vardar team, calls for respect.

Still, it takes a lot to beat a clever and experienced coach like Xavi Pascual. The fox on Barca’s bench will make the difference.