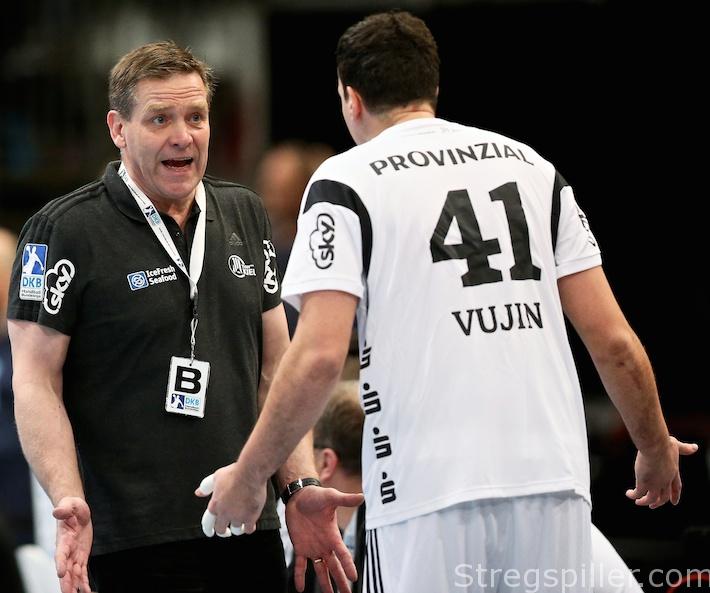 PREVIEW- MATCH OF THE WEEK, GROUP A – FC Barcelona can take a big step towards securing the number one spot in the group, when visiting Sparkassen Arena, on Sunday night.

However, they should not expect an easy task, even though Kiel has been disappointing big time, lately. Still, Kiel is no easy place to win.

A match between Kiel and Barcelona is and will probably always be a classic in European handball.

This time, however, the two teams are finding themselves in very different situations before meeting at Sparkassen Arena.

While Barcelona aims for a major step towards winning the group, if they take both points in North Germany, Kiel are struggling to get back on track after a disappointing streak.

Their chance of another German championship is virtually gone, and in the 2016/17 Champions League, a fourth place in Group A is the best they can hope for.

The crisis at THW is so deep that critical voices against head coach Alfred Gislason have become louder among fans and media alike.

Barcelona and Kiel are the two teams in Europe who have met most often. The game on Sunday will be their 23rd encounter.

Of the 22 matches, Barcelona have won 11, Kiel 10 times and one draw. Barcelona´s 11th victory came in the two teams´ first Champions League game of this season.

On October 1st, Barca won narrowly 26:25 at Palau Blaugrana. The match, Kiel will remember best probably is the Champions League final in 2010, when THW took the trophy, succeeding 36:34.

Duel of the Match – Part One: Landin/Wolff vs de Vargas/Ristovski

You should not look at the position of goalkeeper to find the reasons for Kiel´s problems. In fact, no only I claim that with Niklas Landin and Andreas Wolff, THW have the strongest goalkeeper duo of all club teams in the world.

However, Barcelona are also pretty well equipped. Gonzalo Perez de Vargas has done brilliantly this season. Case in point – the 26:23 home win against Flensburg in the last round.

It may come as a surprise that I include Borko Ristovski in this section as well, but the 34-year-old Macedonian did have a few “out of this world” performances this season.

Duel of the Match, Part Two: Gislason vs Pascual

Alfred Gislason is under pressure like never before in his nine years as THW coach. Media as well as fans are questioning if he is still the right coach for the “Zebras”.

However – don’t ever underestimate the 57-year-old Icelander. One should not be mistaken about his tactical skills and his ability to read a game.

It’s unlikely that Xavi Pascual will step into the trap. Barcelona’s coach knows who he is up against, and although he is currently more successful than Gislason, the experienced Spaniard knows things can change fast in handball. Good coaching will be key in this match – more than ever.

Duel of the Match, Part Three: Duvnjak vs Entrerrios

Without question, Domagoj Duvnjak and Raul Entrerrios are very important for their respective teams.

They are the leaders on the court, and they are the kind of player their teammates will rely on, when the going gets tough. At the moment there is no doubt that Duvnjak is even more essential to Kiel than Entrerrios is to Barcelona.

Kiel is relying heavily on the elegant Croatian playmaker.

For two Barcelona players the return to Sparkassen Arena will be special – Filip Jicha and Wael Jallouz.

The 34-year-old Czech represented Kiel for eight consecutive seasons before joining Barcelona in 2015. Wael Jallouz only played one year in Kiel and he will be revisiting a place where he had no success. But success he did find in Barcelona.

“We want to thank our fans for their support throughout the ongoing group phase by giving them a great performance.”

“If we can skip the Last 16, it will mean two extra weekends for all our players to get fit for the deciding finish of the season.

“Therefore, we are going to do everything to stay on top.”

THW showed a better performance in their Bundesliga match in Magdeburg, on Wednesday, but it was still not enough to prevent another defeat, as Magdeburg won 27:26.

Whereas Barcelona beat the other North German team in the group, Flensburg, at home 26:23 in the previous round.

Needless to say that Barcelona succeeded in their match in League Asobal during the week. On Tuesday, Benidorm left Blaugrana, losing 38:28.

The Sparkassen Arena used to be a fortress, virtually impossible to conquer for any opponent. There is no doubt it will be again some day, but this match will not mark the end of Kiel´s crisis – not in my book, anyway.

Earlier in the week, Veszprém took a narrow 28:27 win in Switzerland against Kadetten Schaffhausen.

On Saturday, Bjerringbro-Silkeborg were close to second major surprise in a row, but they ended up losing 26:24 in Flensburg.

In the other game on Sunday, Paris Saint-Germain are visiting Wisla Plock.