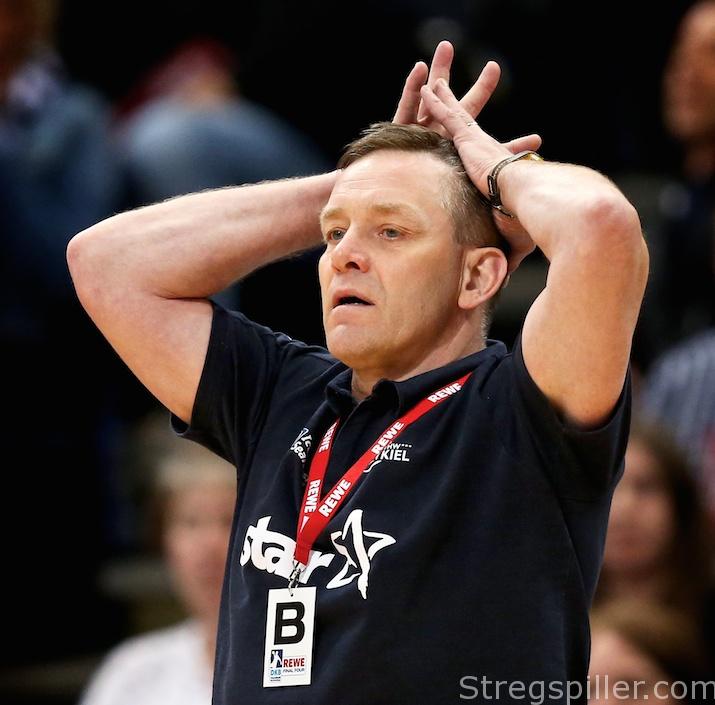 However, Barcelona cannot be unhappy after losing by two goals at Sparkassen Arena.  The Catalans have every chance to catch up with the narrow deficit at Palau Blaugrana, next Saturday.  Considering the pressure Kiel put on them, they should be content with the modest defeat.

The matches between Kiel and Barcelona were a remake of last year’s Champions League quarter-finals, when Kiel succeeded by two on aggregate, after winning 29:24 at home, while limiting the defeat at Palau Blaugrana to 30:33.

The match this Sunday was game number 24 in European competitions between the two clubs.  11 victories for Barcelona, 10 for Kiel and three draws read the statistics before throw-off in Kiel, today.

While Kiel will have to wave the German championship goodbye for a second year in succession, Barcelona already secured their seventh Spanish championship in a row – and once again without conceding even one point along the way.

It just sums up the difference between Germany’s Bundesliga and the quality of Spain’s Asobal these days.

On Barcelona’s end, there was some doubt about goalkeeper, Gonzalo Perez de Vargas, who recently endured some minor finger surgery, but the Spanish international reported fit for the match.

The Catalans were only missing Lasse Andersson, while Domagoj Duvnjak as well as Christian Zeitz were sitting it out on Kiel’s side.

Kiel could have gotten more out of this match.

They were completely dominating the opening phase of the encounter but let Barcelona into the game because of numerous mistakes and ill-advised decisions.

A red/blue card for Rene Toft Hansen with eight minutes left, also played a role in the Spanish comeback, as the experienced Dane was missed in Kiel’s defense during some hectic minutes towards the end of the game.

However, Barcelona also deserved some credit for keeping a cool head and getting back into the match despite the heavy pressure they were under.

It was strange looking at the scoreboard at half-time, realizing that Kiel were only leading by one goal.  It felt like Kiel had been firmly dominating the first 30 minutes.  They certainly did so in the beginning.

A strong defense, impressive will power, in addition to a Marko Vujin on fire, made-up for a dream start of the home team and got Sparkassen Arena rocking.

I was reminded on Kiel’s performance at the recent Final4 for the German Cup, which they won.  Vujin scored three of Kiel´s first four goals, as they changed a 1:2 deficit into a 5:2 lead.  And Kiel did not stop there.

Strong defense, stellar goalkeeping by Niklas Landin and successful fast breaks, brought the North Germans to a 9:4 lead.  In this phase, Duvnjak was not even missed.

Young Nikola Bilyk did very well on the playmaker position, and Kiel kept the upper hand until 10:6.

But then the German record champion began making mistakes when in offense, and Barcelona promptly capitalized on these errors.

With two minutes left, no other than Jicha made it 15:15, before Vujin scored the last goal before the half time buzzer.

Just as we thought that Vargas was not entirely fit, he was sent on.

Borko Ristovski had not made any difference before, but neither did Vargas in the second half.

Even though Vargas as well as Landin on the other side, had brilliant saves during the final 30 minutes, the goalkeepers definitely did not dominate the game.

Kiel continued to be in the driver´s seat, but Barcelona kept them on a short leash.

The men of coach Gislason were leading by three or four goals for long periods, and it they could have kept the advantage, their chances of reaching the FINAL4 again, would have been even bigger.

A couple of times, Kiel were going for a five-goal lead, but it never materialized.  Towards the end, Barcelona was cutting the margin of difference once again.

With less than eight minutes left, Rene Toft Hansen received the aforementioned red card after a tackle to the face of Wael Jallouz.  Eventually, the red card was changed to a blue one, which means that Toft may be suspended for the return match.

While Kiel were missing Toft in defense, they were lucky to keep Patrick Wiencek on the court after a couple of tough actions, that could have easily led to his expulsion.

Alfred Gislason tried Steffen Weinhold next to Vujin, but playing with two left-handed back court players did not really pay off.  Fortunately, Vujin kept scoring and ended the day with 10 goals.

Still, his stellar performance did not to provide his team with a comfortable lead before travelling to Barcelona, next weekend.

Marko Vujin probably played one of his best matches since he joined Kiel.  Not only did he score 10 goals on 13 attempts, but also his goals at the start of the match gave his teammates the confidence that this task could be solved in their favor.

He also provided more assists to his teammates – especially the line players – than I am used to seeing from his hand.

All in all, this makes him my Player of the Match.

We did not have to wait long for it to occur.

After two minutes, Victor Tomas served a brilliant pass from right-wing position across the goal area to Wael Jallouz who made it 2:1 for Barcelona, converting an in-flight shot.

Probably, it will be just as close at Palau Blaugrana, on Saturday, as it was at Sparkassen Arena, today.

A two-goal difference is not much, but in close encounters as the meetings between Barcelona and Kiel usually are, it may just turn out to be enough for Kiel.

However, Barcelona must be content with the result achieved in Germany. Obviously, their chances are better than last year, when they had to catch up a five-goal advantage – something they could not do.

A few days before their home game against Paris Saint-Germain, Szeged´s Swedish left-wing, Jonas Källman, told me that he considers Paris to be the best team in the world.

Certainly, Paris did not prove him wrong this Sunday afternoon, in Hungary, when they were good enough, winning by three goals, 30:27.

Paris appeared to steamroll Szeged from the start, getting up 4:1.

However, the Hungarians managed to come back, while keeping the game rather tight most of the time, even though they were never able to threaten their star-studded opponent.

Richard Bodo´s goal, converting a direct free-throw, right after the half time buzzer, while reducing the distance to 14:16, was the highlight of the match.

Yet, it did not change the ultimate outcome – Paris were the better team. Do not expect Paris getting in any kind of trouble when the two teams meet again, next Saturday.

I say it now: Welcome to Cologne, PSG!