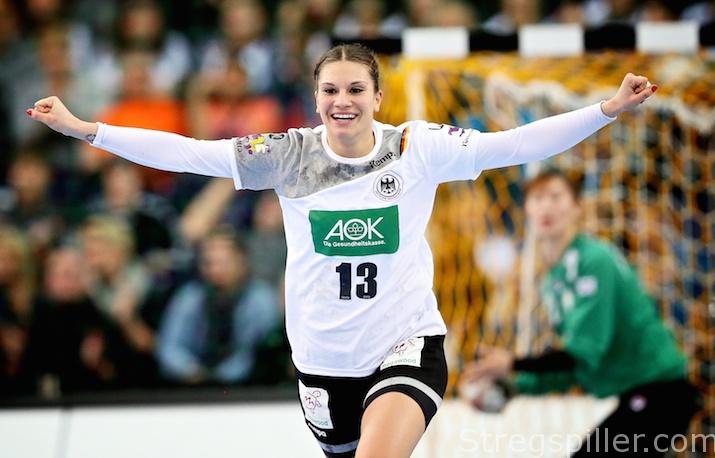 Host nation Germany came back from an early deficit in Leipzig, as back-up goalkeeper Katja Kramarczyk showed that she’s on the roster for a reason and Frederike Gubernatis, a late call by head coach Michael Biegler just weeks before the start of the tournament, scored seven goals en route to a 23:18 victory against a Korean side which ran out of gas in the second half.  I talked to Germany’s line-player, Julia Behnke, after the match.

Congratulations on an important win against Korea tonight. You had a rough start and then came back strong. Where do you see the main reasons for the turnaround?

JB: I think the key was our aggressive and strong defense. Especially in combination with Katja Kramarczyk we improved throughout the match. That was our goal prior to the game and I think we executed it quite well.

How difficult was it for you to find the right solutions in defense against a team which plays quite differently compared to styles you are used to in the western hemisphere?

JB: That’s true, especially because they were quite strong individually. They were very fast one-against-one, which meant it was extremely important for us to be quick on our feet and that we helped each other.

Actually, it all worked our well, certainly in the second half.  Did you feel Korea could come back as they did in the match against The Netherlands?

JB: I think we worked better together as a team as the game went on, and the crowd supported us as well. It was just a lot of fun and I never had the feeling that the game could turn around – I think we dominated the game.

Do you think it played into your cards that Korea had a tough game against The Netherlands yesterday – I felt the team was getting tired towards the end?

JB: Obviously, it’s much better having a day off to get some rest and new energy.  Anyway, I think we played well as a team, as we had to find a way to replace Kim Naidzinavicius. But I think we did a great job and that we took a step forward.