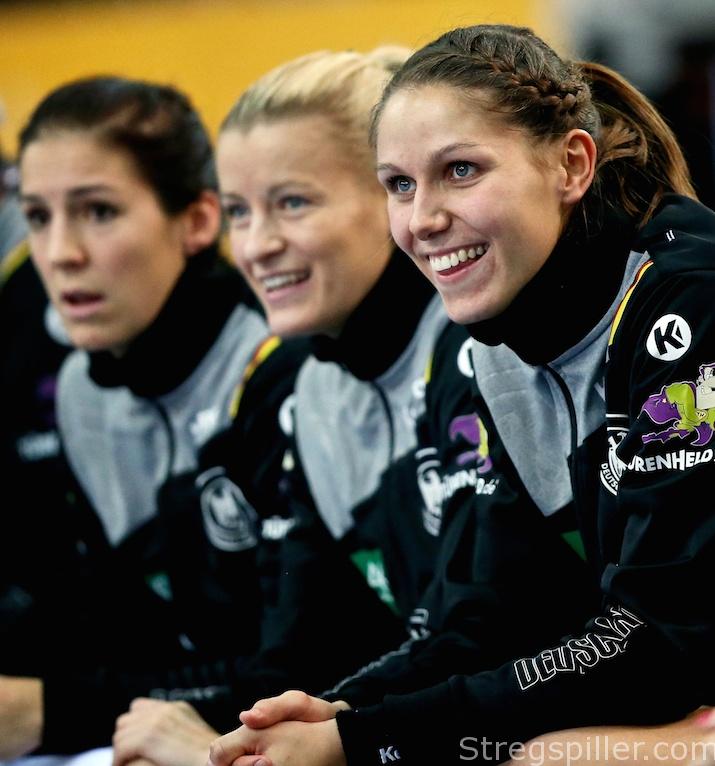 INTERVIEW – Unlike several other players, Xenia Smits will continue her career in Germany’s women’s national handball team, and in this exclusive interview with stregspiller.com, she even expresses some optimism regarding the future of the national team.

At the same time, she hopes to reach the FINAL4 in the Champions League with her club, Metz.

Clara Woltering, Katja Kramarczyk, Jenny Karolius, Nadja Mansson, Kerstin Wohlbold, Svenja Huber, Isabell Klein, and Friederike Gubernatis – no, this is not the starting lineup for Germany´s next international match, the list includes all the players who said “farewell” to the national team after a disappointing World Championship on home ground, in December 2017, when “Die Ladies” were eliminated by Denmark in the Round of Last 16.

Given the exodus of talent, many German handball fans probably won’t believe in a glorious future for the country´s female national team – but Xenia Smits does.

The 23-year-old left back is one of the players who decided to give the national team another chance under the auspices of the newly appointed national coach, Dutchman Henk Groener, who was so successful with the Netherlands´ women´s team in the past.

“I was not present at the recent national team get-together, which was the team´s first meeting with Henk Groener, but I have a very positive impression of him – partially from talks I have had with him directly and from what I have heard from other players,” Xenia Smits tells stregspiller.com.

“I think he is the one who can bring us back on track, and I really like his ideas.

“We are going to play another style of handball – faster handball than before, and that will suit me very well.

“It is correct that we have lost quite a lot of players, and of course this is a handicap, at least in the short term. But there are also several young and promising players coming up – I believe in the future of our team.

“It will take time, but I am optimistic, of course,” says the 182 cm tall backcourt player.

The first test for Groener and the newly formed German team will be two matches against Spain, in the qualification tournament for the European championship, in France, later in December.

Germany will be hosting the first game in Stuttgart, on March 21, before visiting San Sebastian for the return match three days later.

As Germany lost a point back in the fall of 2017 (drawing 26:26 at home against Lithuania), they will be under pressure, in case of two more defeats against Spain, who are currently on top of the group. Only the two best teams in the group are sure to reach the final round –  EURO 2018.

“We do not have much time practicing before these matches; we simply have to prepare as thoroughly as possible, although we may not have much of a chance against Spain.

“However, it would be a disaster for women´s handball in Germany, if we do not qualify for the European championship – we simply cannot fail,” says Xenia Smit who hangs her hopes on a road win against Lithuania and another victory at home against Turkey, in order to qualify for second place.

“I hope and believe that better days are on their way!” she says.

Despite being only 23 years old, Xenia Smits in one of the key player’s who will have to carry the new German team – not the least because of her experience at the very top of international handball.  In fact, she is the only German international who plays for a team with a realistic chance, reaching the quarter-finals of the 2017/18 Champions League.

Playing in her third season with French back-to-back champions, Metz Handball, after joining from Bundesliga club HSG Blomberg-Lippe, she has the necessary experience. Still, Metz have not been able to take the last step yet – qualifying for the FINAL4 – despite coming close a couple of times already. But this season, the team’s performance appears to be more consistent.  Case in point, their most recent Champions League match, which Metz won 31:29 on the road against Thüringer HC, after a close fight.

“A year ago, this would have been the kind of match we would have lost – probably.

“We have become more steady – a development explained by the fact that many of us have played together for several years now. It provides confidence and comfort, and all in all it adds to stability.

“I still think our level varies too much, but in general, there is no doubt that our stability has improved,” says Xenia Smits who was the top scorer with 10 goals against Thüringer.

“It did not have anything to do with the circumstance that I was playing against a German squad, though.

“Of course, for me it is always fun to play against German teams, but it’s not an extra incentive.

“My motivation is always on top, no matter who we meet,” emphasizes Smits who admits that her club’s performance in 2017/18 thus far also makes her dream of reaching the FINAL4, finally.

“The FINAL4 is probably a dream all handball players have, but we are still far from reaching this goal.

“Of course, we are assured of the quarter-final, but our last three matches in the main round are still extremely important.

“It’s not that I think the rank in our main round group will make much difference to the quality of the opponent we get in the quarter-final – but it will be important to play the second leg at home. Therfore, we will have to finish at least second,” she realizes.

Some may argue that this season is Metz´ last chance to shine, not only in the Champions League but in the French league as well, where the record champions currently enjoys a clear lead, once again.

Over the summer, Metz will be losing their Slovenian goal-getter, right back, Ana Gros. She will be joining Brest, while goalkeeper Marina Rajcic and line player Laurisa Landre have announced their respective departures as well.

Furthermore, strong rumors are linking Swedish international, Isabell Gulldén (currently CSM Bucuresti), with Brest, and other French stars such as Alexandra Lacrabere, Camilly Ayglon and Siraba Dembelé will all return to the French league as well.

“I am not afraid that we will not stay on top, though.

“Our team will also be reinforced for next season,” Xenia Smits points out, referring to the fact that French international, Gnonsiane Niombla, has signed a contract in Metz.

“The return of several French stars will make for a more interesting league, I think, and it will also present more challenges for us – but I only welcome it,” says Smits who recently extended her own contract with Metz for another year.

“I will be staying here at least until the summer of 2019.

“What will happen thereafter, I simply do not know. We will have to see, when the time comes, where I am going,” she says with a smile.

First of all, it will be about getting the best possible position for the quarter-finals in the ongoing Champions League campaign with two absolute key matches coming up.

This Sunday, Vardar Skopje will be visiting “Les Arenes”, and the following weekend, Metz are going to face current number three in the group, Hungary’s FTC.

Xenia Smits and her teammates have particularly fond memories playing against Vardar. Last time the Macedonians visited Metz – in the main round of the 2016/17 Champions League edition – Metz won as big as 42:28.

“Of course, it is nice to think back on this match.

“However, our most recent memories against Vardar are not that exciting. We did not play well at all, when we lost 29:23 in Skopje, earlier this season.

“Still, I hope and believe that we can beat them this time and defend our second place and then we will have to see about FTC.  Right now, it is all about the game against Vardar.

“We probably cannot beat them by 14 goals again, but less will do,” says a smiling Xenia Smits.